The Q makes no apologies for his respect for the people behind the Prospect Park East Network and the Prospect Lefferts Gardens Neighborhood Association. PPEN was the first to address the issue of outsized development, many of their members having started the fight back in 2007 around the proposed 23 story building on Lincoln Road (which eventually became a different project, the one that's topping out now). PLGNA's been around since the block-busting and red-lining '60s. Under Martin Ruiz and now Quest Fanning it's been laying the groundwork to become a powerhouse community resource, and has been sponsoring all kind of interesting work around neighborhood. So it comes as no surprise that they are now beginning a planning and assessment study of their own, with the support of elected officials even. There's been some bellyaching about PLGNA getting some dough to do this, but that's what happens when you place nice with people. They tend to be more likely to be helpful and respectful right back. Other groups take notice.

Here's what they're saying, per their website at www.ppen.org. 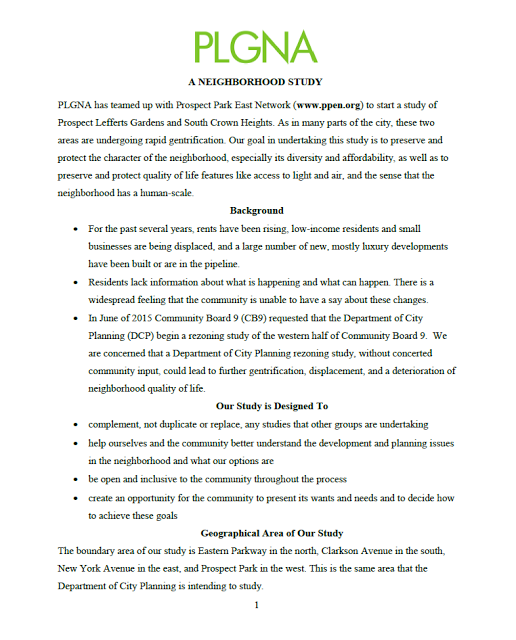 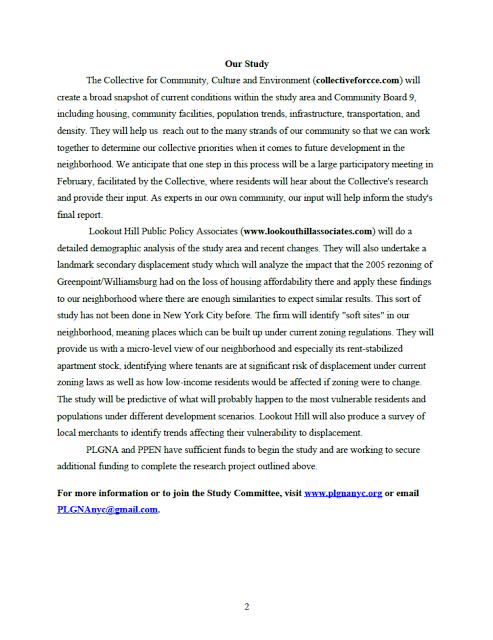 Posted by Clarkson FlatBed at 12:04 PM

It's a bizarre feeling to read a pronouncement on this topic that makes sense and is reasonable and constructive. The bar has been so low for so long... Good on PPEN and PLGNA.

Thanks for your article, which I thought was short and sweet.

I do have one reservation — your headline ("PPEN & PLGNA Enter the Planning Study Fray”). Specifically the word “fray” contradicts the tone we are trying to establish and maintain. As you say later in a different context, we are respectful of the work that each group has been doing.

We don’t view our study as being in competition with any other study. What we’re trying to do with ours is to cover ground that no other study has focused on.

We hope that eventually we will be able to work jointly with all groups in the neighborhood and with the great majority of its residents and merchants. We’d like the whole community to be able to speak as much as possible with one voice and we want to play a positive role in helping to achieve this goal.

Considering how fragmented the neighborhood is right now, this may seem like a tall order. But we hope and believe that, after the natural suspicions and differences of opinion and emphasis have been talked through, we can all come together and work cooperatively.

We expect to be reporting to the community regularly on the progress of our study, and we will be receptive to feedback as the study evolves.

I'm so proud of what PPEN had accomplished this far!!! Gene, thanks for cementing the fact that this is not a competition but an open collaboration with the community.

Fray or no fray, PLGNA and PPEN's contribution to the process is welcome!

I don't view the neighborhood as being fragmented right now.

I view about 300 hundred people, divided into three distinct camps.

Meanwhile, the other 99% of PLG is either unaware and/or does not care.

Seems pretty peaceful to me.

That's true on any issue, Mike. Still the deciders are the deciders. They're politicians and anyone interested enough to come out and voice their opinion. The same is true in elections, same is true in backroom politics. It doesn't really matter what the 99% think if their voice isn't part of the conversation. But you know this. However, you and I clearly share a love of playing Devil's advocate.

I think a lot of people are over estimating the role of government and politicians.

I think that people who lost their homes to eminent domain would argue with your assessment. And major international companies that were not allowed to merge because of regulators. And outside of the U.S., I give you Syria.

It's only in this country, I would argue, that we ASSUME things will go according to precedent. The power of the written law in this country is somewhat unprecedented in human history.

I hope PPEN and PLGNA have a good time doing their study. I am confident they will learn a lot.