It's a testament to the weakness of incumbent City Council person Mathieu Eugene that he's facing four challengers to his throne this Fall. An even semi-popular council dude would easily slide to his max number of terms (Eugene was "grandfathered" so he has yet another term to go before being tossed out). Two popular and qualified candidates announced a while ago, with two new ones joining the race since. Of course everyone has the right to challenge Eugene, so we can't fault anyone for piling on, But the chances of beating him outright have plummeted as a result. Mathieu will maintain his most steadfast base, and each of the other candidates will carve out their spot in the electorate. Since it's do or die in the Democratic Primary, and you need just a plurality to win (no run-off), conventional wisdom says Eugene robs us of another four years of strong, vocal and imaginative leadership.

Unless..well, we'll cross that bridge in a later post.

Let's get right to the candidates. The Q wrote about the first-announced challenger last fall, Brian Cunningham. At that time I would have called him a shoo-in to top Eugene in a head-to-head battle. Smart, experienced, politically savvy with many friends in his native neighborhood, his early announcement was meant to dissuade others from joining - a shrewd political move given the nature of Democratic primaries and the cynical power of incumbency. It seemed to be working...for awhile.


Then we learn that longtime Crown Heights resident (5 generations - wow) and currently Fenimore II mom Pia Raymond joined the race. She too is smart and popular, albeit less experienced in the ways and means of the notoriously arcane and treacherous City legislature. So who wins? Let's start with surface details. Anyone who knows Pia can't help but note (and her campaign poster attests) she's quite glamorous and fashionable, plus tall and svelte - she doesn't fade into a crowd. I'm not quite sure how that fits into the equation. I mean Brian's handsome too, though his beard is new! The two could be homecoming King and Queen. The calculus here is tough to determine. She's African-American; his roots are Jamaican; Eugene's obviously Haitian. (another recent addition to the roster of candidates is ALSO Haitian, Rose St. Albord). To say these things don't matter is to deny the reality of our neighborhood (oh hell, any neighborhood), where language, culture, dynasty and custom - not to mention rivalry - often rule the day. And yet a winning candidate must transcend such simplistic identity-politics and appeal broadly, and most important, s/he must bring out the vote. It ain't easy to get people to the polls for a primary in September just as the new year begins (and let's face it, the year begins in September, no matter what the calendar says).

And who really takes the time to get to know these folks or the issues they champion? You, perhaps? Yes, identity, roots, family, church...these things really do count for a lot. But so does YOUR identity, your roots, family, spirituality, gender (let's not forget that), orientation and, for lack of a better word, your politics beyond this particular race. These are all Democrats, mind you. They're not going to go all Trump on your ass. But still, there are differences, and some come down to the intangibles of charisma and leadership. You want someone who will inspire, lead the charge on contentious issues, take tough stands, articulate difficult issues, be teachable and tolerant, communicate effectively on ALL means of communication (just try to find your current Councilperson on le Web).

Oh yes, and then there's the endorsements. Will BP Adams and Jesse Hamilton et al go to bat once again for the miserably unfit Eugene? Will the Working Families Party endorse him again too, after catching flack for giving him the WFP seal of approval last time? How about the powerful unions, particularly the hospital workers? Then there's the local political dynasty of Una and Yvette Clarke. They too showed no remorse or independence four years ago, sticking with the man they placed in the job in the first place. With the contest running near-even in 2013, they conpspired to robo-call folks in the district aGAINST capable and independent challenger Saundra Thomas. And while some consider her position as Congressperson untouchable, Yvette is more exposed than you'd think, and a strong candidate could take on her seat anytime - her district is much more diverse than it was 10 years ago. Therefore, look for her to hold on to the Haitian vote as long as she can. (So gross. To think politicians would stand by a loser for their own self-interest. Wait...I guess that's most of the Republican party with Donald Trump. Sanders supporters said the same of Clinton. I might as well have just described the political class in general. Ah, I hate everyone. Except you, of course, dear reader.)

The Q met with Pia on Friday morning, and though I've served with her at Community Board 9 for a few years, this was the first time we had a one-on-one conversation. I've gotten to know quite a number of people on CB9, but Pia is reserved, where I'm a loudmouth. I'd like to think I listen too, and I DO I really do, but Pia strikes me as a particularly good listener, and an excellent conciliator. She's super proud of her heritage, and she has plenty of good reason. She's managed to trace her own legacy to slave owners in North Carolina, and from those tortured beginnings her family rose to prominence in Brooklyn with her father - Syl - becoming a true stalwart (gentry, if you will) in Crown Heights through his sporting goods and trophies shop on Nostrand, at Park Place. This is a good example of the problem with the term Gentrification. I mean, with clear-souled folks like Syl Williamson helping define a neighborhood and working to keep kids on the right path...they were the heroes that kept a place from completely falling apart after the earlier gentry abandoned the neighborhood for the 'burbs. That's Gentry - the real deal. For a brief bio on the famous Syl Williamson, Pia's dad, check this here. Pia ran the business for awhile but eventually the landlord decided he could get more than Syl's could pay. It was then that Pia started her non-profit "Creating Legacies," dedicated to identifying and preserving the deep histories that differentiate "community" from "neighborhood."

Pia saw the worst of the drug and gang years through the eyes of a child. By the mid-80s, she started to plot her escape. She managed to earn a spot at Groton, the blue-blood boarding school in Connecticut. Then to Boston University, and back to NYU for Social Work. She's that powerful combination of reverent for elders, strong of character, and comfortable in non-native worlds. She puts people at ease. She's a laid-back presence in a rumble-tumble world. She's thoughtful and passionate, though maybe a bit circumspect. That's my only concern, really. Where folks like Diana Richardson, Jumaane Williams, Brad Lander, Laurie Cumbo can walk into a room and demand attention, Pia acquiesces. She may grow to lead, to command a room. If she surrounds herself with good people, we'll be in good hands, and she will put at ease any fears you may have of engaging with your elected officials. 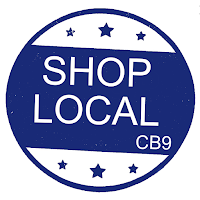 Pia's work with Community Board 9 has focused on the needs of small businesses, and she and co-chair Warren Berke put together the successful and ongoing Shop Local CB9 campaign. She's a champion of local merchants as part of the Nostrand Avenue Merchant's Association, long under the stewardship of Lindiwe Kamau. Pia has brought fresh energy to NAMA, and maintains healthy relationships with all the local merchants, old and new. And she's a board member of the Lefferts Manor Association (LMA) that helps keep "the Manor" alive and thriving as a tight-knit 'hood within a 'hood. Her hubby's cool, her kids are gorgeous. What's not to like?

See what I mean? It's tough. We're going to have to look hard at these candidates and see in them what we want for the future of our neighborhood. I'll be coming back to Brian again, because I think he deserves a close-up now that we're heading into the busy season of signatures and campaigning, door-to-door. And don't you dare forget the upcoming "debate" at the Brooklyn Commons! 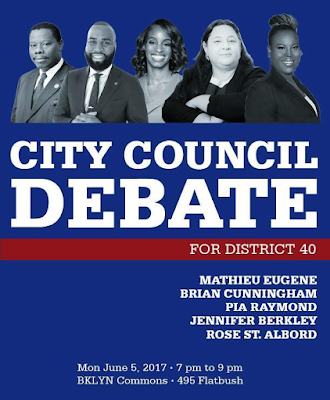 Posted by Clarkson FlatBed at 11:35 AM

Can't get behind Pia. Her big booster, Jesse Hamilton, is an IDC turncoat.

Hey Tim,
I saw you at the debate last night and I left a few minutes after you did.
It felt like a 5th grade run-for-school-council affair with Bill Cunningham head and shoulders and more heads and shoulders above his peers.
I'd like to figure out a strategy so we don't get all crabs-in-a-barrel in our district with 4 competitors going against Mathieu Eugene. It's such a SHANDA that he's been in office this long. Go Bill Cunningham!
--Alissa

This is going to end in disaster if some of these zeroes don't drop out.