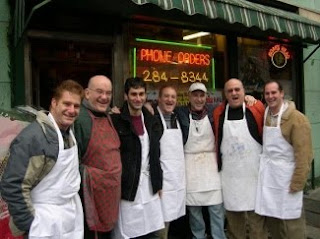 Many apologies to all my vegetarian friends. But if you go both ways, and don't know about Michael's Prime Meats, the last REAL butcher in NYC, then you don't know nothing about not much of anything.

I'll out myself here. I'm a member of the Park Slope Food Coop. I don't advertise it (oops); some people got a real beef against the PSFC. But they've got the swellest organic grass-fed flesh you ever did feed on. And gorgeous veggies at 1/3 what you pay at Whole Foods. Constantly changing products, dirt-cheap bulk foods, and a membership office full of dominatrices. I mean talk about strict!

But when I want to get a truly fresh hunk of animal, there's a place in the 'hood that I guarantee will make your last barbecue of summer a sizzler. It's called Michael's Prime Meats and it's just a 10 minute walk east to Nostrand, 'tween Martense and Linden. You'll be there in half the time it takes to get to American Apparel in Park Slope. Not that you can get baby back ribs at American Apparel. (Or judging from their racy adverts, maybe you can.)

The place has been there since 1931. Same family. The clientele may have changed over the years, but I doubt the attention to detail has changed one iota. Great jovial service. Great vibe. Some people think a butcher should stink like a butcher. A real butcher doesn't stink at all (his shop anyway). Because most of the meat comes out of the locker only when you order it. It gets chopped up and heads back to the clean cold tomb from which it came. Sawdust on the floor? You bet. Why? Who the f knows? Probably some ol' butcher wives tale about hygiene, or maybe left over from the days of icehouses, when sawdust would help insulate the precious frozen stuff. Can you imagine ice cream before refrigeration? Must have been for the rich only! And how 'bout the story of that NYC dude who nearly cornered the market on ice? Charles Morse was his name, and his "ice trust" was linked to our first five-borough mayor, Robert Van Wyck, whose god-forsaken highway is not pronounced Van Wick, but rather Van Wike. The Whitestone, however, is pronounced the regular old way, rhyming with light groan, the sound you're probably making as you read this.

Check out Michael's. Tell them Q sent you.
Posted by Clarkson FlatBed at 9:58 PM

I've been meaning to go there to try the chicken burger, which got a rave from Time Out NY.

Charles: Let's go this weekend. We can bring the little ones...we can call it educational! (and delicious).

Excuse the momentary hijack here, but every true New Yorker, especially those who live in Queens, understands that the Van Wyck Expressway is unquestionably (even if erroneously) pronounced as Van Wike!

Oh, I see, Clark. You mean you would take the word of the Van Wyck family over that of the countless numbers of Noo Yawkers who, by custom and tradition, have insisted upon renaming it as The Wick? Tell you what: it's a good idea you didn't start this thread on a Queens-based blog. LOL! Even though I'm a Brooklynite through and through, I once worked in Queens for several years. Having learned a bit of culture of that borough -- from the street to Queens Borough Hall -- I know that calling the Van Wick the Van Wike is like referring to Houseton Street as Hooston Street. Not! :-)

As to the real purpose of the thread -- sharing about Michael's Prime Meats? Well, now that's a gem. There used to be a great butcher on Flatbush. Vinnie's I believe. But they are long gone now. Meanwhile, as things both change and stay the same around here, there are lots of us who need/want to get to know more about all of PLG, not just the "standard" names and places. So thank you!

I grew up in Queens. Everyone said "Van Wick."

Tim - I didn't see your comment in time. We will have to get over to Michael's together very soon.

Best Meats on Flatbush is the "Best" here in the 'nabe but still no comparison to this place.