A New Beginning for the Flatbush Trees?

The Q promised months ago to stay on top of getting action on those old green metal trees at the confluence of Empire, Ocean and Flatbush. The original project, born in the smiley-face free-to-be-you-and-me '70s, has worn poorly. Few can even remember it looking anything but sad.

After discussing with the powers that be at DOT, getting the original plans from Seth K, and using resident expert on all things City bureaucracy Mike Cetera, it turned out that the only way to get "approval" to do anything was to present an idea to the Design Commission. Many people over the years have envisioned taking over the whole parking lot for a public plaza. Mike enlisted a pro bono architect to come up with such a longterm plan that could be part of our ask to the D.C. Then, in response to my posts, an artist named David Eppley (who lives around the corner from the trees) came to us with a unique proposition. His material of choice for murals and such is industrial tape. Colorful and removable, the tape will allow him to create a work using the trees as the form but re-imagining the content. He adds:

"Working with Botanical Gardens and local school group I would create a tapestry of pentagons to cover and embrace the existing tree forms. Students and I would work on creating pentagons out of vinyl. Inside each pentagon could be student drawings of  flowers and plants in the Gardens and Prospect park.

Safe to say I could present this idea after I return from a upcoming trip I am taking. So an early February date for presenting to the board would be ideal for me. It would be great to get it going by summer. Could be a good SYEP program. (Student Youth Employment Program)."

By engaging local kids, the piece could feel "owned" by the community. His idea could end up looking something like this: 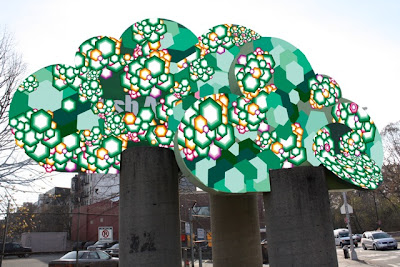 We'd want to do something with the columns as well, of course!


The idea was floated at last night's joint Transportation and 197a/Parks committee meeting.

The result was universal approval of the two-pronged plan: start by calling attention to the plaza by doing a temporary artwork, all the while planning and fundraising (i.e. elected official buy-in) to take the illegal parking lot back and create something useful and green. The full board will vote on the idea soon. You're welcome to comment here or come to the meeting; I'll check to see when it's on the agenda.

Will the trees survive that long term re-envisioning? Who knows. Maybe they don't have a place in that final plan. But in discussing this with many, it's clear that people are divided about that. I hope a consensus emerges - a really great plan to spruce up the plaza might be just the kick we need to move forward.

I was asked recently why I care so much about that little piece of concrete. To me it's a powerful symbol - along with the Phat Albert's building - that PLG and Flatbush have low self-esteem. Nothing about that entrance to the neighborhood speaks to the pride and history that actually exists here. The art idea may not be an ultimate solution, but at least it's a step in the right direction. Thoughts?
Posted by Clarkson FlatBed at 9:44 PM

The "trees" are ugly so why not?
Redo the trunks in some kind of sparkly brown material to match the leaves.

Agree we can do a whole lot better as a gateway to our nabe. Come down FB on the B41; it is very sad.

This is amazing. I love it.

That Fat Albert place got to go-Trader Joe's anyone!

Yes to this new design for trees! And Yes to Trader Joes!!! Phat Alberts is total crap in look an selection!

I just placed a request on Trader Joe's website for a new store at the Phat Albert warehouse 495 Flatbush Avenue. Please go to the below website to also submit a request for a Trader Joe's to come to this neighborhood!!

Phat Albert warehouse may not be available. But there is the big spot just East of McDonalds and across from Western Beef, on Empire Blvd. Other than the laundromat it's abandoned and falling apart. Let's put in a request for Trader Joes to look at that spot too. Or Fairway now that their Red Hook location is water damaged.

Trader joes would go for 7th and Flatbush, maybe, but our neighborhood no way. They place their stores in hot neighborhoods that have residents and commuters and tourists and foot traffic... Sigh. Has to be a NYC chain that understands nycs unique gentrification biz opps

This project would be great. In the long term I think a complete redo of that area without the trees would be in order.

I just sent a request to Trader Joe's as well.

It will never happen, but I always hoped something along the lines of a daily farmers market would go into Albert's not unlike the markets you see in other countries. Again foot traffic more than likely would be a problem, but then again, a historic building with that kind of feel may have the possibility of becoming a destination alongside the park and gardens. The beer store alongside opens a small beer garden and who knows what might happen. Then again, rents would raise and we cannot have that now can we.

The graphic for the trees in the image looks great. Really hope they do it.

Love the tree design, sparkly brown trunks an added bonus! My husband was just complaining about the welcoming of those awful trees last week.

Word on Flatbush yesterday was that the owners of the Barclays Center have been getting on the cops about cleaning up Flatbush. The cops were at the troublesome bodega on Flatbush and Winthrop yesterday for a few hours...

As a community are we able to piggy back on the so called clean up of Flatbush to improve our Welcome Trees, and create a proper neighborhood entrance?

Anyone know if there's any truth to the claim?

I'm totally in favor of a Trader Joes...maybe if the right people got involved to sell our 'hood it could work. I think their prices and choices would appeal to more people than you think. And being just off the B41 and the B/Q it could draw residents from other neighborhoods. Above store parking lot on top of the building ala Stop 'n Shop?

I certainly like Josh's idea of a beer garden. Spend the morning at the Botanic garden and the afternoon at the PLG beer garden. That would be a good day in the hood.

Why would the owners of Barclay's Center care about our part of Flatbush Avenue? We are miles away from the arena?

where you been? everyone knows ratner buys his crack at Ray's.

Cortelyou Road happened because it was made to happen. Bk Hearth and others brought businesses there. We can do the same.

Frankly, I think the trees are hopeless, and after a few months when the tape started peeling off they'd look as bad or worse. The "gateway" to our glorious Flatbush/PLG needs a bolder revisioning than this attempt to spruce up a hideous, dated relic.

Love the enhanced trees, especially getting high schoolers involved. The trees CAN be a wonderful addict to the neighborhood if we spruce (no pun intended) them up.

Love the enhanced trees, especially getting high schoolers involved. The trees CAN be a wonderful addict to the neighborhood if we spruce (no pun intended) them up. Beauty Salon Davie