That Was One Weird Week

Ever wanted to be a fly on the wall at your own funeral? This week, the Q had a miniature version of the experience, when he shut down the blog as a result of having a metaphorical gun placed to his temple. It's been quite a whirl, whiplash and wrecking ball. But then something was said that was so untrue, so offensive, and so hurtful that I simply couldn't let it stand. So here I am to tell you all, once and for all:

I GREW UP IN IOWA, DAMMIT. NOT IDAHO. NOT OHIO. IOWA. As in The Music Man and corn and shit. I've lived in Brooklyn since 1988, but good golly Miss Molly get my damn homestate right.

The whole point of this blog is to tell y'all what happened, so here's what happened, and at the bottom of this post you'll find the emails sent by Ms. Alicia Boyd, MTOPP founder and the sole board member of her non-profit New Directions In Healing that accepts tax deductible donations that help fund MTOPP's activities including intense and deceitful electioneering. That's the truth, I'm sticking by it, plenty of evidence. I don't mean to say she should be dragged off in handcuffs; it's not really that serious an offense for a small operation anyway. Don't believe me? This is on her website, I don't need a Deep Throat thanks:


**Please note that New Directions In Healing, a non-profit organization, is accepting donations on our behalf and we thank them for their contribution to our cause.

Listen, I know I've said plenty of negative things about MTOPP over the years. Why? Because I've watched her destroy people and somehow get away with it. Ask yourself - why on earth does the community put up with it? She basically runs CB9 meetings by push, heckle and shove. Has any of it benefited the community? Have landlords dropped to their knees and begged for forgiveness for their greedy ways? Has the City rushed to aid in the form of much-needed public housing? Have developers been thwarted from building thousands of units of market rate housing? Has Empire Blvd stopped being shitty? Have houses stopped being torn down, or have ugly skinny apartment buildings stopped appearing mid-block? Have people stopped being pestered to sell their homes at below-market prices in cash? Have developers given in, given up and moved along? Hell no. It's only accelerated. I've taken to calling those mid-block eyesores Boyd Buildings.

In this blogger's opinion (and they're ALL just opinions) MTOPP has inhibited dialogue and created a level of fear and distrust that is completely destructive. People I care for have been hurt. And that is something up with which I cannot put. I've posted more than 2,400 times to this silly site, and I'll admit in my haste for a punchline I've stuck my keyboard in my mouth a time or ten. But I'll be damned if I'm gonna shut down now that I have my legal strategy in place, and since dozens of you have sent kind words of encouragement, and even Steve Witt at Kings County Politics gave me a moving eulogy. Quite honestly I was eating a momo in Jackson Heights when I read it, and I shed a tear right into my white sauce. Thx Steve. The white sauce actually wasn't salty enough.

It's humbling to think that when I started this blog Obama was in the White House and #BLM was but a simmering glimmer. Most of my writing is silly, but sometimes I kvetch about corruption and racism, and I always try to be honest with where I'm at, learning, making mistakes, making jokes in poor taste, and in fairness, apologizing when I get it wrong.

But I have never, ever made statements attacking the black community, or against women, or pro-developers or pro-gentrification or any of the other garbage Boyd is attempting to "destroy me" (her words) with. I have criticized SPECIFIC people for SPECIFIC actions, and those people come in every hue and flavor. Look, we here in Central Brooklyn are blessed with tons of black civic leaders. But guess what - they're not all good leaders, the right leaders, or even particularly honorable. Most are, sure. And I've never, ever once suggested that they be replaced with whites. I consider that the worst assumption of the gentrifier - the colonial notion that what the natives need is outside governance. That somehow there wasn't ALREADY A GENTRY HERE. The white savior notion is repellent and odious and all sorts of good SAT words meaning awful. And hell there's a whole new generation of Caribbean and African American leaders ready to take the helm. They need our support and respect. But folks, not MTOPP and frankly a couple of their sister orgs, who've decided terrorism against their own neighbors is a legitimate way to win an argument.

I love people. And I've tried very hard, sometimes successfully and other times less so, to let that show. It would appear that I was woefully naive, thinking that holding black and white public figures to the same standard was somehow progressive, even needed. And so I wrote headlines that I thought were hilarious and that got to the crux of the matter - ones that I have since apologized for and removed. I've been harsh about community leaders who talk out of both sides of their mouths. But I've also taken "white assumptions" to task when they don't pass the smell test. In other words, I'm trying to figure shit out, and do so with transparency and integrity.

So buy me some time I apologized to get her to call off a potentially career-damaging protest. She didn't like the first one, and called with more threats, and I know that no matter what I do the blackmailer will always ratchet up the terms. And so I was literally forced to post that I would never again comment in any way shape or form about the neighborhoods of Flatbush, Crown Heights or Lefferts Gardens. But this ain't Frontline, baby. I also once posted that the Park Slope eatery al di la was opening its newest outpost where the McDonalds currently resides across from my beloved Q at Parkside. I've signed nothing, and wouldn't. I support Ms. Boyd's first amendment rights more than she will ever know. But I fully expect mine to be respected as well.

There is something so Trumpian about her behavior, that I fear the President has rubbed off on our society to such a degree we may never recover. Imagine - tens of millions of kids are growing up thinking that bullying, demagoguery and tribalism are effective means of getting precisely what you want. And in Boyd's case, she's managed to smear and/or sue Pearl Miles, Jacob Goldstein, Carmen Martinez, Dwayne Nicholson, Demetrius Lawrence, Eric Adams, Laurie Cumbo, Ben Edwards, Michael Liburd, Warren Berke, Winston von Engle, Laura Imperiale, Musa Moore, Zellnor Myrie, PLGNAP and anyone who's dared to speak to an opposing viewpoint. To all of you, even though I've disagreed with some of you from time to time, I thought of you a lot this past week. You might have said to yourself "man, I really don't need this shit" and I hear you. Because man, I really don't need this shit. 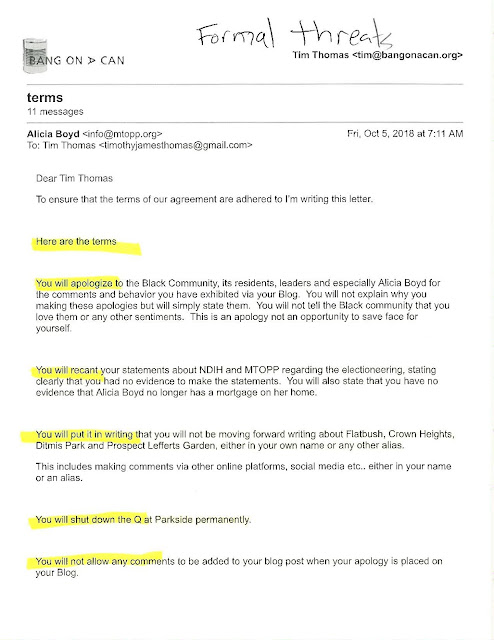 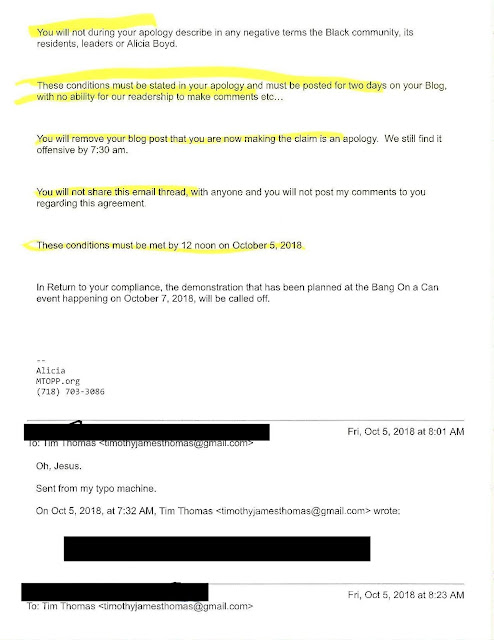 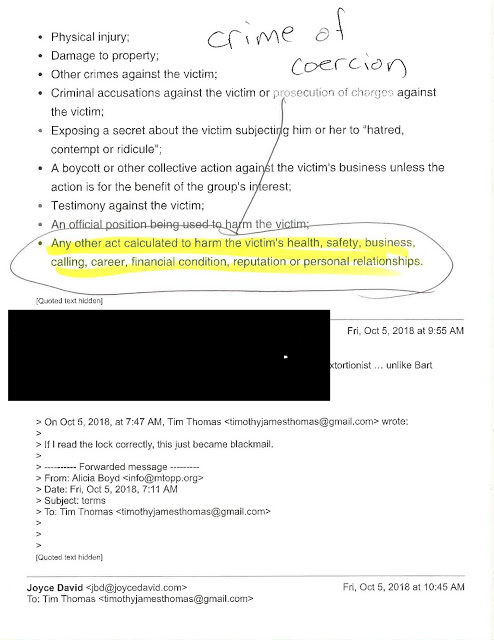 Posted by Clarkson FlatBed at 12:58 AM

Trumpian about her behavior?

From what I can tell, you are describing things that took place before he became president. This sounds more like the types of things that occurred under Communist regimes, when people were declared enemies of the people because they didn't have sufficient class consciousness. They were then excoriated in kangaroo courts and made to cry their apologies before being sent into exile. Instead, this is about your race and class consciousness.

What other cultural referents are at play here? Tom Wolfe, Radical Chic and Mau-Mauing the Flak Catchers.

Best of luck with the fight.

Glad to see you're back! You had us scared for a moment :)

In your thousands of previous posts, there have been some great ones and a small handful of clunkers that have made me cringe. THIS last post is, I think, the best you've written, by far. It may well be damned near the best I've read on ANY blog, ever!

Welcome back and congratulations!

[BTW, I merely deleted my previous post so that I could fix a typo].

Glad you are back, I was worried too. Thank you for speaking truth to power.

You go Q. Pundits that don't put their foot in their mouth every so often aren't worth a damn in the first place. Keep it up.

Add me to the list of those happy to have you back in the saddle.
But where do things stand in terms of her threats to attack you at your work? I can't imagine she's just given up and decided to be civil (or honest or unselfish).

"Better to die on your feet then live on your knees"

Keep standing up to bullies. I think we've all had enough of AB terrorizing the neighborhood.

Long time reader, never posted. But glad you're back. You have the right to say what you want about the neighborhood and its politics. I hope your employer will back you up.

You go Q! Welcome back. No bullies allowed in PLG...period.The neighborhood is backing you up...all the way.

Aha. So the de-bloggification was a ruse perpetrated by Flatbed in response to the de-facto SLAPP suit initiated by Psycho Boyd.

It is amusing that Boyd believes she possesses the power to change the course of mighty rivers and jump over, or stand in the way of, tall buildings, which are now going to become taller than ever, at least in this neighborhood.

Some people think it's naïve to think she REALLY means to"stand in the way of...tall buildings"

Dear God. I hadn't checked in on the Q in awhile. Had no idea she had escalated to this degree. You have so much more guts than I do, a mere Internet troll is enough to make me feel vaguely ill. Keep up the good fight. They've got you in a trio with Gavin the Proud Boy and some racist gotcha-video gal in some upcoming wee march that's afoot. Makes me ill.