Vigilante Justice For the Q` 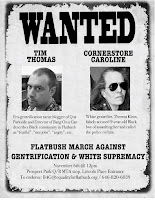 If you're just joining the show, you could do worse than to read this from BKLYNER about the Q and his sad travails.

It would seem someone appealed to Alicia Boyd and Imani Henry and got Proud Bastard Gavin McInnes removed from the list of Flatbush's Most Wanted. Now it's just down to the two major "White Supremacists," the guy who writes essays and news about the neighborhood without pay or patrons (yours truly) and a serial harasser who has repeatedly threatened to call cops on her building mates, then traumatized a 9-year old boy and whole family by wildly accusing the child of groping her when clearly (as body-shaming social media posters have noted) there wasn't much there to grope. She then pretended to call the cops, which elevated the video-taped situation to a whole new level of zeitgeist outrage. Despite the fact I've never met nor condoned "Cornerstore Caroline," she and I apparently now embody all that smells rotten in Denmark. I mean Flatbush. I always DID confuse the Danes and the Dutch...

(Let me reinforce the message if it wasn't clear - don't call 911 unless it's an actual emergency. And if that's the first you're hearing of that advice, you haven't been paying much attention to the last few years of news, both mainstream and non.)

Given the recent tragic national events that have arisen from frothy and nasty political rhetoric, I condemn the poster advertising an otherwise worthwhile protest from Imani-Alicia and hope that he and she can focus on the bigger prize - creating a firewall against the biggest threat to democracy, tolerance and decency the nation has seen in at least 100 years. And no, its not CC or the Q. The Q, for his part, plans to spend the day canvassing for Democrat Max Rose, who might just catch the multi-term incumbent who's biggest claim to fame is a bill to get Trump's picture hung in every post office across the land.

Such rot! I just passed a woman on Flatbush handing these out (or trying to) to every POC she passed (she was having about a 50/50 success rate). She refused to give me one. At what point to you get to sue these people for slander?

If enough people of color drop by your blog and catch on to what Alicia Boyd is trying to pull here, she could be in big trouble. In my opinion, what she's doing is disloyal to the black community. It is deception for political gain, plain and simple. Some folks will be deeply offended by her actions and not all of them are as easy going as me. Just sayin'.

I feel bad for the ten or so people who will show up and have no clue what they are getting themselves into with this MTOPP cult. Wonder how Boyd's AirBnB listing has been faring lately

You've been obsessed with this Black woman for years. It's really creepy. I hope you don't escalate further. Find another hobby besides stalking black women.

LOL Mikey; it seems pretty clear that any obsession is directed the other way, FROM Boyd to Tim And anyone else who might disagree with her.

Mikey has a creepy tendency to frame political disagreement as stalking. Seems like projection to this reader. Perhaps he should spend some time contemplating the issues at hand, rather than the skin color of the parties involved.

It's been hypothesized on Bklyner that Boyd is the Brownstoner Troll....the person who used to routinely badmouth PLG and Crown Heights, making it sound super scary in an effort to frighten "gentrifiers" and developers. There is a logic to that. Interesting.

The Brownstoner TROLL? The creep who started 12 or so years ago by posting vile racist nonsense about our neighborhood on the Brownstoner website and ended up "merely " posting scores of links to disgusting photographs of maimed bodies? THIS creep: http://brownstonertroll.blogspot.com/ ?

Whatever I might think about Ms. Boyd I can't begin to imagine that they're the same person. Besides, AFAIK Boyd didn't even know the location of our neighborhood back then. There! I've defended her!

Interesting. I don't remember the racist stuff posted by the B. Troll. What I remember is all the stuff about how deadly the neighborhood is, how you'll end up with a gigantic, gaping wound if you decide to walk around the blog at night, etc. etc. Weird, ridiculous stuff. However, I did hear this twerp when he was interviewed on the radio and it was most definitely a male voice. So, it was not Alicia Boyd.

This march was today, right? Anyone see it or get an estimate on crowd size?

While she's going around saying and doing crazy things, the neighborhood is being assaulted and destroyed by these developers. Because there's no one to keep them in check, they refer to PLG as a "developer friendly neighborhood."