The Salad Days of 205 Parkside

Some say I'm a Q obsessed. Why do you care what Moses Fried does with his property, they ask? At this point, what with scaffolding screaming "loitering and littering welcome," workers literally doing work in the dark of night or (illegally) on Sundays, and (according to the DOB website) changes being made to the plans as they go, I guess I'm beginning to take it personally. I'm considering going all Erin Brockovich on him; but I just don't have the time, what with spring upon us and a sale at the Gem.

Meanwhile, here's a wistful reminder of the building's better days, a death announcement for its onetime longtime retail tenant: 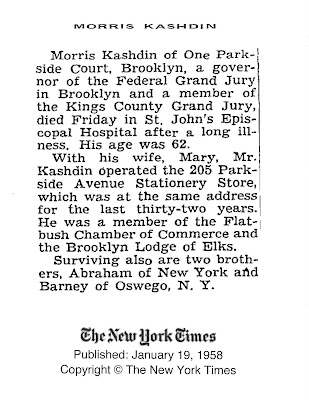 There's a lot packed in there worthy of comment. But I'd rather share another vintage clipping. I came upon it while looking for more info on Morris Kashdin and his 205 Parkside stationery store...a letter to the editor he wrote about what could easily pass as a very modern issue - budget deficits and bond issues. Then I read all the letters on that page, and I was stunned by their similarity to issues being volleyed about these days. Note the date: September, 1932 - roughly three years after the original Black Friday and the beginning of a lost decade for America economically.

Holy Moses Fried! It doesn't take a PhD in Astro-Economics to see that America has been down this path before, almost fit to a t. Here's the whole page of letters to the ed, with articles about Ivan Krueger (1932's Bernie Madoff), the Constitution and taxes (today's Tea Party), the evils of national deficits (seemingly everyone but Paul Krugman), the pain of unemployment at mid-life, the unwieldy size of drivers licenses (well, we fixed THAT problem) and of course - Pod Dismuke and Dink Botts - (??? and ????). 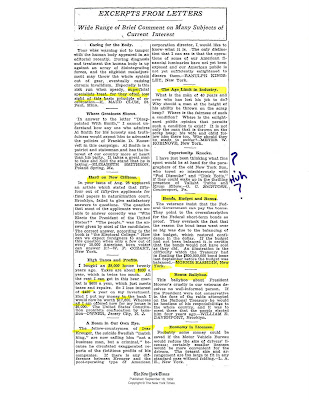 Posted by Clarkson FlatBed at 3:15 PM

Keep it up. Something needs to be done at that location. It is a hazard.

Mr. Kashdin's economic preferences (in his 1932 letter)seem positively tea bagger like. Of course when he wrote his letter he hadn't completely seen just how well Hoover's policies "fixed" the depression, so I guess we shouldn't criticize him too harshly.