205 Parkside Gets Ready For Its Closeup

Those of you who commute by walking down Parkside to the Q already know the remarkable transformation that has taken place to 205, the Moses Fried owned building that has been the bane of the block for more than two decades. Here you can see that new windows, removed graffiti and new glass to the lobby have done wonders, though the scaffolding continues to thwart passers-by: 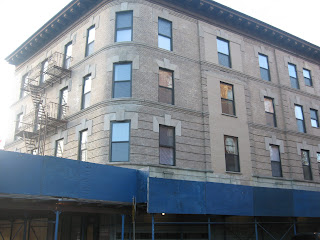 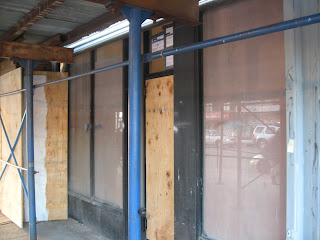 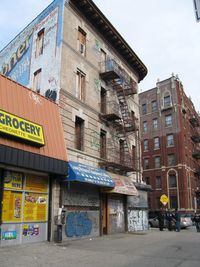 People have said I'm obsessed with the progress, but the look of the building is not my primary issue with Fried and his grandson David Tepper's development project. It's the "use" of the building, which is described as a long-stay hotel. The Community Board refused is other plan to change the Certificate of Occupancy, so he changed the plan to conform with a well-worn business model of his. Other Prince Hotel projects have yielded hooker/drug joints - no way to candy coat it. They've become hourly places "under the table."

I worked for the Doe Fund, a creative program for homeless men that involved the Ready, Willing and Able work and sobriety program, and I know well that there's a need for single-occupancy room (SRO) housing, especially given the state of homeless shelters in 2011. So the fact that Fried took a perfectly nice apartment building and turned it into a shelter-esque joint is not my beef. It's that as a landlord and developer, Fried has shown little interest in people beyond profit. Though in fairness, he leased a building of his to a pretty decent non-profit on Woodruff serving a deserving population of homeless women and kids. Let's be clear though - the price was right; Fried's no do-gooder. Given two such rather large buildings on Woodruff, another huge shelter-building at across Ocean on Woodruff, a real big one at 60 Clarkson, and it would be fair to say we've got a high percentage of "transient" folks in a fairly tight radius. I don't want to speculate about what that means for the neighborhood...though I've certainly heard plenty of opinions through the years. A building in northern PLG cause a major brouhaha over just this sort of business plan (read about Providence House here). I found the argument a bit overwrought, given that we live in a way more heavily "social-serviced" neighborhood down here, largely without too much trouble. Though I'm not impressed with how most landlord's assume their responsibility in maintaining these buildings, and in particular, the comings and goings of non-residents. Ambulances and police cars are frequent visitors to the four buildings I mentioned, and some of the stories I've heard of goings-on give me pause. And yet, this is part of the grand experiment of NYC, rich and poor, privileged and troubled, that hopefully still exists as an ideal in the hearts of many. The reality on the ground? Often less than ideal. Just ask the tenants.

More to come on 205 Parkside. I hope for the best, though the fact that squatters have been living there throughout the demo and construction makes me think Fried has little true caring for the people he claims to want to serve. One "resident" whom I queried says he's been paying rent for years. Wow. In an abandoned building without utilities. That's bold. "I'm a deeply religious man" is Fried's favorite refrain. I hope he lives up to the words of his faith.
Posted by Clarkson FlatBed at 5:05 PM

Sorry - I had to edit the above post a bit for clarity's sake. Here is the tightened-up version:

I'm just surprised he didn't go the condo conversion route - I'm pretty sure he could have turned a decent profit, but would that have required too much financial input now from him? I've got to say I don't understand why he would want to follow this business model, when he could sell the place off as condos and wash his hands of the whole thing - he isn't exactly a young man.

And, to clarify things a bit, we're plenty "social services" concentrated up here in northern PLG, having at least 8 such facilities between Empire Blvd and Rutland Rd (by my count in 2010), including 40 residents of SRO-type facilities for formerly homeless individuals "suffering from co-occurring mental health and substance abuse disorders," as well as 17 transient women in Providence House's existing facility on Lincoln Rd just east of Nostrand Ave. There are also several other smaller homes scattered throughout the area, including one in the Manor, and three apartment buildings on Sterling St. between Bedford and Washington with a total of 48 apartments. Yes, the vast majority of these facilities are trouble-free, but, trust me, the officers of the 71st Precinct are quite familiar with all of them (I've asked them).

The over-concentration of social service facilities in your neck of the woods is no excuse for perpetrating the same pattern here - Charles Barron, on the City Council, was the only one who got this point; he knows how much our 1% mayor has been pushing the construction of supportive housing facilities on poorer neighborhoods while keeping more affluent areas free of these establishments.

I won't re-open an old discussion, but if you have all the facts, you know that this plan is all about the money the City is paying to Providence House to subsidize the rents for the women to be housed there - the net they will get is way above market, and to whom else are you going to rent a 300 square foot studio at that price (and note that those are exterior dimensions - the actual usable square footage is more like 250)?

I think it's pretty clear that the neighborhood is better off with the improved state of this building. IIRC other Prince Hotel properties have been shut down because of illegal use so the best strategy is probably to watch and wait and to "drop a dime" when/if necessary.

Actually, Moses Fried is a slippery one there, Bob - any time his "hotels" were shut down for illegal use, he got them reopened pretty quickly. The only things that have been able to stick are buildings violations - his Prince Hotel, at 211 Schermerhorn St., has been closed via full vacate and stop work orders since March 31. 2010; the same is true of the 127 Lefferts Pl. property (March 19, 2010). There's also an SWO on his Bay Ridge outlet, at 315 93 St. Seems like only his Park Slope place, at 250 12 St, remains open, albeit with 2 DoB and 5 ECB violations - note these are all also for illegal construction - any "quality of Life" complaints have been dismissed. It really puzzles me as to why this guy even pretends to stay in business - I'm sure he could make a pretty penny if he just sold off the entire portfolio.

And if the people living in that building actually have been paying rent on the space they are living in, they have tenants' rights, and Fried will have a hard time getting them out of there if/when he seeks to actually begin "hotel" operations.