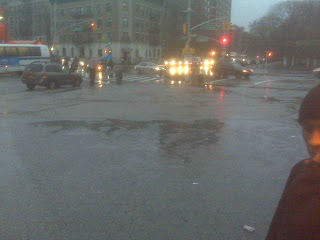 It's gone y'all. They said they were gonna take it down, and they did. And the timing was auspicious, since last night the DOT unveiled its big plan to change the name of the intersection from Death Corner to Half-As-Many-Deaths Corner. This must be the Bureaucracy Gods way of telling us it's time to think about how we want this ginormous unused public space to look - now and into the future. It's ours. Let's make it the envy of the City.

Ideas? I know the Community Board's Parks Committee is open...we just need to unite behind a plan and stay focused til it happens. I really hope that momentum is on our side, because what with the park's massive new Lakeside project, and the closing of this corner's entrance for traffic...we have a real opportunity to say something positive about our home through the magic of public design. Again...don't leave it to me. My latest idea is a giant human chess game taking place 24-7, giving employment to out-of-work actors and out-of-work costume makers. Then every Saturday you do sort of a Renaissance Fair, with jousting and wenches and lots of artisanal mead. Like I said, don't let me have anything to do with but cheer leading.

And by the way, last night was awesome. Take a peek at all of your neighbors who trudged through the rain to check out the plan to improve safety at Parkside and Ocean: 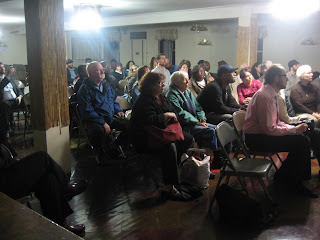 The presentation was strong, the ideas were good, and our questions were both passionate and astute. I mean...what's going on here? It was practically...dare I say it...productive. Great input from Ed Fanning of CB9's Transportation Committee, crucial input from Annie Williams of the Woodruff Block Association (I'm with you Annie - Woodruff traffic's a mess, and I blame my own Clarkson Avenue for feeding you the cars!). Celeste Lacy Davis from the Ocean on the Park Historic District made good points about the need for traffic calming along Ocean. All the high profile cats and dogs were in attendance, from the Democratic District Leader to Lefferts Manor Association prez to reps from the two most affected community boards (14 and 9), both precinct community councils (70th and 71st), a guy whose name I missed who said he was the head of the East 21st Block Association (Woodruff to Church), and lots of concerned citizens from 353 Ocean Avenue, a/k/a Prospect Park East. Plus Carrie from Hawthorne Street who got the whole ball rolling with her video nigh on three years ago, and her plan created in conjunction with Transportation Alternatives. And of course, the lady who got us all there, Maddie Fix-Hansen, who spoke eloquently of the need for drivers to get ticketed up the wazoo. All in all, a nice bunch of neighbors, and I felt proud of us all.

It's a good plan. With minor tweaks, let's make it happen, and show that when we put our minds and hearts to something, we can make shite happen. We may not be Pork Slip, and we don't wanna be, but the Man better be on notice - there's some fire in the Caledonian belly! (Or is that post-jerk indigestion?)

The plan itself? I'll post a diagram as soon as I get a good copy. In the meantime, here's my layman's description:

In addition to closing the park to vehicle entrance, they will extend the curb into the intersection, making the entire box smaller. The crosswalks will be tighter too - for instance, you'll go from the current corner in front of the Q station ON A DIAGONAL to the Park corner. Visibility will be improved greatly, for both pedestrians and drivers. Buses will no longer be allowed to idle on Ocean - this change will be affected by removing parking meters on the McDonalds side of Parkside and having the buses wait there. New, better markings will reduce driver confusion. And in all likelihood they will add some sort of enhanced traffic signal, like a left-turn only and head-starts for pedestrians.
Posted by Clarkson FlatBed at 9:33 PM

Can you give any specifics on the plan? As someone who was at the first meeting but (unfortunately) not this week's, it would be nice to learn what our activism got us.

I'm awaiting a nice-looking copy of the plan to publish. But in the meantime, the gist is this: with the closing of the car entrance to the park, the DOT will extend the curb into the intersection, making the entire box smaller. The crosswalks will be tighter too - for instance, you'll go from the current corner in front of the Q station ON A DIAGONAL to the Park corner. Visibility will be improved greatly, for both pedestrians and drivers. Buses will no longer be allowed to idle on Ocean - this change will be affected by removing parking meters on the McDonalds side of Parkside and having the buses wait there. New, better markings will reduce driver confusion. And in all likelihood they will add some sort of enhanced traffic signal, like a left-turn only and head-starts for pedestrians.

Obviously I added that comment to the post. Thanks anonymous for pointing out that I didn't mention the actual plan!

Which Democratic District leader attended (Each Assembly District has two, a male and a female. The 43rd Assembly District has Shirley Patterson and Jesse Hamilton. I assume you're referring to Jesse, as I don't know that anyone has actually ever seen Ms. Patterson)? Any other elected official on hand? Specifically, anyone from Mathieu Eugene's office?

Jesse was there, as per usual. I suspect he has ambitions of becoming a very, very powerful dude in Brooklyn politics, a la Clarence Norman Jr., our local kingmaker cum jailbird who held Jesse's position and then became head of the Democratic party in Brooklyn. Matthieu Eugene hosted and chaired; he was typically "removed" from the topics, acting mostly as MC. There's an annoying habit at these things of introducing every "important" person who's there, basically a process of reading from an attendance list provided by the councilman's assistant David Suarez. Although it does help this cub reporter get to know the names of these faces a little better. Our district manager Pearl Miles was there, and that guy who started the UMMA group for which the park is named - Ed Powell. UMMA was a civilian patrol, not unlike the one I've been trumpeting in the Q, started by 7 Muslim families in the area to stop the drugs and violence in the 80s and 90's. I'm not actually sure whether they're still active.

And word comes via Twitter and FB that yet another pedestrian was hit at this corner this AM. Said to have been in serious condition; Flatbush Ave closed down as far as Linden. Change can't come soon enough!

The plan is here: