The recent attention paid to troubled corner Parkside/Ocean has stirred up a mighty sandstorm of sentiment. I recall early in the discussion about that corner people were saying "hey, if you deal with that crossing you better deal with Parkside/Flatbush too." True enough that corner has stratospheric accident numbers too, and then came the recent pedestrain death to nail home what we all know well...traffic's a bitch around here, whether you're walking, biking, driving, swimming...but I do feel the need to point out a major difference between the two - Parkside/Flatbush suffers primarily from intense scofflawism. Speeding, running red lights, not waiting your turn to turn, crazy lane shifting...add to this (and this might not make me very popular) some really boneheaded pedestrian jaywalking, and you've got a hot mess. BUT...the intersection itself is pretty typical four-corner stoplight stuff. Parkside/Ocean suffers from serious problems of design as well - a huge unmarked space and five roads - though I'm sure improvements could be made at P/F too. The fact is, speed kills when you're in a wreck. The motorcycle accident touches a nerve, I think, because all of us suspend a bit of disbelief every time we venture out near our beloved main street. Another case in point...

A reader sent me some pictures yesterday (below) that show what we all know to be yet another local traffic cat-and-mouse game. The triangular BP station just below Lefferts has struck many of us [sic] as insanity-with-three-sides. There are "driveways" everywhere, parked cars at every-which-angle, and motorists speeding in and out all willy-nilly. Upon hearing that I was going to write about it, my good law-abiding friend informed me that he too on occasion "created" his own egress after gorging on gas. A scary fact is, and the below pictures prove, that the curb cuts intended for wheelchair access are used more often than the actual driveways when drivers exit certain "corners." Hey, it can save a few seconds, especially if the traffic light is not in your favor! Chaos, thy name is spelt BP. 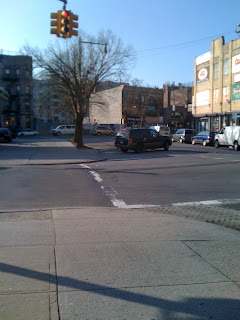 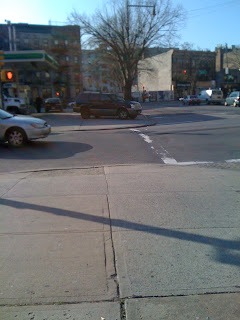 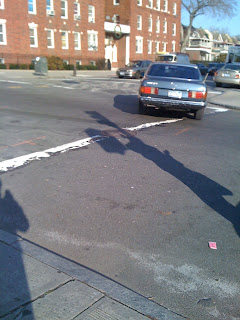 So...what can be done? One, never walk, bike or drive in the neighborhood. And if number one does not seem reasonable, then bring your concerns before the Community Board. The transportation committee chair is Ed Fanning. Ed's a great guy and super-knowledgeable about all things City. But he and the other chairs of committees need residents to bring their concerns before the Board so that City agencies hear about our complaints through "official" channels. It's either that, or we can get elected officials to get involved, who will or won't respond depending on any number of factors. What I'm going to say next may sound antithetical given our recent success in getting Mathieu Eugene on board for the traffic calming study...it's fine to tell electeds about your issues, but it's not always gonna work, especially if your issue doesn't coincide with their electoral objectives (i.e. getting another four years in office). I absolutely think that we should use the CB committees to get the ball rolling...once something leaves committee, it goes straight to the appropriate agency with an official looking letter coming from the District Manager. Believe it or not, it GETS RESULTS. That's not to say you shouldn't call Yvette Clarke, or Tish James, or Eric Adams or Barak Obama or Dr. Eugene...it's just that there is a legitimate community-led forum for concerns (the CB) and it has been massively underutilized in this neighborhood. I'm on a crusade to get people to realize that STUFF DOESN'T JUST HAPPEN to make things better - PEOPLE make things better by getting involved. I do hope you'll send me an email with your transportation concerns, and I'll forward it to Ed directly. Then again, if everything is hunky dory, don't bother squawking...the CB won't come knockin'

And Mathieu - please DO add the BP cruster-fruck to the growing number of complaints I send your way! I'm making a list, checkin' it twice, and gonna find out...
Posted by Clarkson FlatBed at 4:10 PM

Between the treacherous BP station and the car wash up a ways with vehicles constantly parked on or crossing the sidewalk both in front and in back of the building that whole stretch is unwalkable. Pedestrians are really allowed only on the East side of Washington or the West side of Flatbush. Nothing in between those zones is safe for them. And the fact the city considers that intersection safe for pedestrians to cross is lunacy. The light changes before you even reach the median. There are cars taking turns into the crosswalk from all directions. The city would never allow there to be intersections like we have here in PLG on Park Avenue. But it's allowed on Flatbush and on Ocean.

That car wash is maddening. Why is it that the city just lets car washes take over sidewalks and lanes wherever they want to?

And would someone, someone please primary Mathieu Eugene? I don't think there's any competition for worst city councilmember. He takes that hands down.

Most cops drive cars, and support car washes and hate bicyclists and bike lanes. Just a fact. If they had to live within the five boroughs of NYC things might be somewhat different, just like in racial profiling cases. Someone who drives in here from LI and has no interaction with residents here beyond dealing with bad apples is going to make some very incorrect assumptions, and wants to be able to drive his/her car out of here as fast as possible, pedestrians and bicyclists be damned.

Mathieu Eugene will have at least one challenger this election - Rickie Tullock. He ran against him last time, but considering that most people don't even bother to turn out to vote around here, Mathieu Eugene was re-elected by those who did - primarily the Haitian community, and the workers of SEIU, which endorsed him. He has kept in touch with these groups throughout, and the only resolutions he has ever introduced in City Council consist of calling on the Federal government to change Haitian immigration and deportation policies, most recently on November 3, calling upon the Federal government to create a Haitian Family Reunification Protocol to speed immigration of Haitian citizens with relatives in the US.

His concern for his fellow Haitians is important and laudable, however, his disregard for his other constituents is not. The only way to replace him is to vote in someone else.

Sorry, that's Rickie Tulloch, who was originally Una and Yvette Clarke's chosen successor for the post now occupied by Mathieu Eugene. However, they got into a dispute over the renaming of part of Church Ave Bob Marley Blvd, and allegiances were shifted to Mathieu Eugene. Lately, though, I have heard that even the Clarkes are fed up with him, just as many of my neighbors, long-term Clarke followers, are fed up with them, due to their support for Mathieu Eugene, who has done nothing for this neighborhood (note these are long-term residents, who formerly did anything the Clarkes decreed). If the Clarkes come back to supporting Rickie Tulloch, he will have the two characteristics (at least up until now) necessary for a win in this City Council district: Caribbean heritage (he's from Jamaica, as is Una Clarke) and the backing of the Clarkes. I don't really see any other viable candidate emerging given these "requirements" for a win in this district.