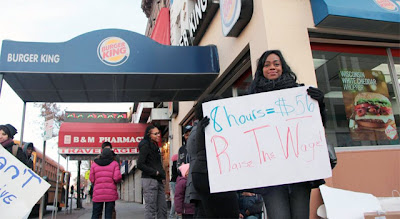 Folks at 914 Flatbush's Burger King are among many hundreds of workers trying to bring attention to the need for higher minimum wages (see above). When I think of people working 8 hours at the BK for $56 I get sick to my stomach. Actually, I get sick to my stomach thinking of the way I used to slam those Whoppers down while driving across the USofA as a younger man. Remember the 99 cent burger wars? Think about it...hunks of factory cow and high fructose corn syrup and embalmed tomatoes for less than a buck. I can only imagine how many poorly paid people all down the line it takes to bring us this garbage. (but damn it tastes good...until you get three-quarters of the way through your meal and you want to slit your wrists.)

God knows we have plenty of fast food around here. And that means we have hundreds of neighbors getting paid dirt for wages. It's just a petition of course (well, I guess I'm being hypocritical saying that), but fast food workers in NY are asking for our e-signature towards a higher wage and the right to unionize. Not much to ask I say. Here's the site: FastFoodForward.

(I promise not to make this site a political rant thing. We all get enough of that on Facebook and such. I just thought it was cool that the Burger King near Erasmus was taking part).
Posted by Clarkson FlatBed at 12:14 PM