From Hookah to Sing Sing

His name was Larry Pagett, but maybe you knew him better as Biz, or Biz Loc, or Molotovbizzz, the man who's been charged with killing Droppa, sorry Chrispine Philip, at the Flatbush Ave Buda Hookah Lounge. 589 Flatbush, to be exact.

This was a particularly terrifying gangland style shooting at a public watering hole and there were others critically hurt in the deadly assault. Depictions of such off-ings in movies might seem sickly glamorous to some. You know, Fats Joey sits in a quiet red checkered tablecloth eatery, face to the door, and his assailant enters with guns a-blazin'. Gore pours from the poor goon's head and onto his pasta. Visible splatters on the carefully arranged pictures of the owners with Freckle-Face Freddy and Squeaky Sal and Tony Orlando (with and without Dawn). In reality, as I've noted through the years of morbid fascination with these Brooklyn gang murders, the killer is a shitty shot and terrified and maybe high and he ends up shooting unintended victims and gets sent up river for a long, long time. Or gets off on a technicality. Or the wrong guy gets collared. Or...

Want a dark humor snicker? Check out the Google reviews of Sing Sing.

Before this particular place was the Hookah Lounge it was just plain Ali's Roti Shop, a classy looking joint with delicious take-out, a nice decor and swivel chairs at round tables. Then it went all Hookah on us, and the noise complaints started piling up. Neighbors weren't happy about it. The craziest part of this story is the strange lead up to the shooting, when the 311 calls about the place being unruly started piling up, and this appeared on a local telephone pole: 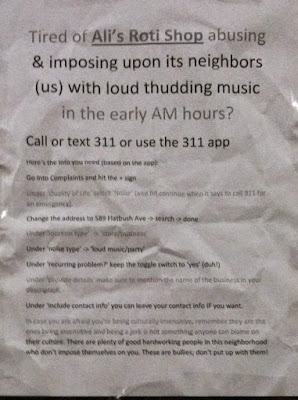 Some neighbors smelled a whiff of gentrifier haughtiness, and Ali's responsibly responded with this: 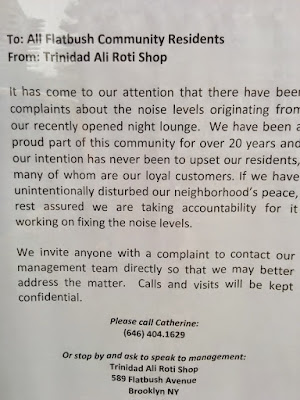 They seem to have found the guy, and another shooting seems to have been linked by retailiation to another shooting, at the same time as J'Ouvert at the start of September. Blame the Hookah? Nah. This crime probably would have happened anywhere. Whatever happened to the good old fashione Duel? You know, like Aaron Burr and Alexander Hamilton? Ten paces, turn, and pow. No innocent bystanders.

That was then, this is now. A new swell looking biz called Tasty has moved in. (Pretty sure this is cousin to another Tasty further down in the 'Bush.)

Sometimes you need a leader to put it all in perspective. Your councilman and mine had a fascinating insight when he stopped by the joint later that day of the early morning shooting, noted at the end of this contemporaneous account.

Councilman Matthieu Eugene stopped by the scene earlier Friday. He said the gun violence is just too much, not only in his district, but everywhere.

Again, this is racist comment. Mr Thomas is noted for such comments such as "Not in Blackyard 'and attacking 40th City Councilman incumbent Mathieu Eugene as " in a Grey Flannel Suit".Ali's Roti Shop has been a respectable institution.Mr Thomas as a former Iowa resident who is a racist Bigot. My suggestion to him id to leave Flatbush immediatedly

Disagree. Roti is NOT respectable if it's blasting loud music 2 in the morning, and there are gunshots where people die. All that angry yelling is ghetto. Sorry.

Interesting - I don't recall Q calling Eugene that (or even why he would - what is the connection between a City Councilmember and a 1950s film/movie about a WWII vet dealing with PTSD, corporate America, and family pressures?). Also, considering that the title character is white (played by Gregory Peck in the movie), I don't get the racist angle either, even if he did call Eugene that.

Here's a link for more info on that: https://en.wikipedia.org/wiki/The_Man_in_the_Gray_Flannel_Suit

Dad!! You old troll, you! I know this is just a ploy to get me to come back home to the "country," but I like it here in NYC! It's very, oh I dunno, what's a good word for it...gritty?

Don't forget to take your pills, dad. And stay off the internets! It's bad for your blood pressure.

btw I loved Ali's Roti. They jumped the shark when they went hookah and paid the piper. And so did a few unlucky patrons.