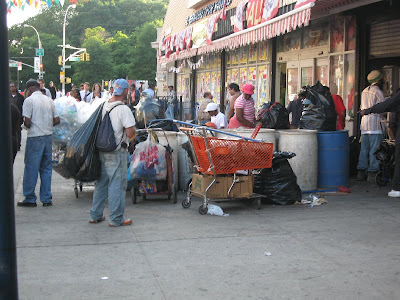 Have you noticed the increase in "canners" at the bottle redemption center at the Pioneer grocery store? If so, changes in the NYS Bottle Bill are probably the reason.

Last fall, the nickel deposit was extended to bottled water, which accounts for a huge portion of the recyclable market. Compliance is fairly good, meaning that most stores continue to accept returns, according to NYPIRG study. There are now a LOT more bottles to collect and return - by some estimates almost twice as many as before the new expansion of the law. More bottles, more "redeemers" as I like to call them.

I pose this question to you: As a resident of "Parkside," do you think the unruly scene should be tolerated, or does the "canner" crowd - sometimes unruly, even violent - generally drag the neighborhood down? I'm on the fence, personally. It's hard not to root for the underdog, and making a living off other people's lazy recycling habits qualifies as underdog labor in my book. And after all, it's the law - right? Retailers have to refund deposits, no matter how you look or smell, regardless of whether you have a receipt, and despite the fact that you might be taking your deposit money and buying a wee bit of crack to go with that bottle of bordeaux. It's all there in black and white, posted in every supermarket: The Bottle Bill of Rights.

But here's the thing. The second half of the first "right" reads:

It is illegal to return containers for refund that you did not pay a deposit on in New York State.

That seems awfully clear to me. Despite the general consensus that "canning" (as it is often called by the "redeemers") is a necessary part of the economic food chain, it's absolutely 100% full-on illegal. Though I'll bet it's rarely (and arbitrarily!) enforced.

What do you all think? I actually really want to know!

While the wording of the rule you cite does seem clear, are you sure it doesn't intend to stop the return of bottles on which no deposit at all was paid. Like bringing bottles from a no-deposit state to redeem in NY. And I wonder if, like with cigarette taxes, the deposit rules don't apply on Indian reservations.

There was a "Seinfeld" episode where Kramer's get-rich scheme was to bring New York returnables to Michigan where the refund is 10¢.

the thing is, that sometimes those "redeemers" get into fights near my building over the recycling that gets put out in front. i've been walking home and not been able to enter my building because some crackhead and some alcohol-doused bottle collector are scuffling over my discarded bottles and cans. this makes me feel unsafe.
also, when i moved to this neighborhood, i didn't realize that you bascially weren't allowed to take your own bottles in, and i resent that. i would like to be able to recycle my own things, but i feel like i can't because i don't have a month's worth of grunge on me and a stolen shopping cart full of recyclables.
those are my two issues with it.

Does anyone know how much money does the grocery store make off this enterprise? It seems to me that it is incumbent on the store to keep their business activities orderly and safe.

it's just annoying... and unsightly.