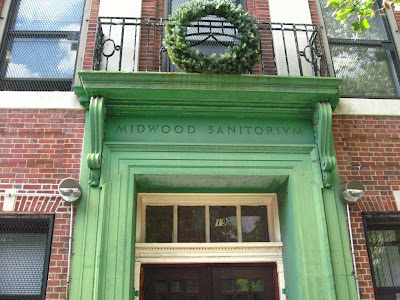 25 Winthrop Street. You've probably passed it without giving it much thought. It's one of the many buildings belonging to CAMBA, Brooklyn's largest social services non-profit. But it wasn't til just the other day that I noticed the engraving above its front door: 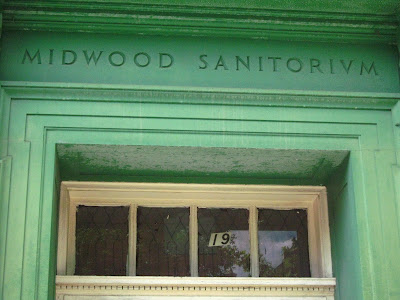 Yes, 100 years ago, right here in our midst, the MIDWOOD Sanitorium did its best to rid its residents of the "White Plague." Many years after it stopped being a TB rest home it would appear it continued to be used as a "last address" for many residents of Prospect Lefferts Gardens Flatbush Parkside Caledonia. I suspect that once 25 Winthrop became listed in the phone book next to your name, it was time to work out the details of your memorial service.

During my extensive research into the origins of American sanitoria (read: a quick peek at Wikipedia), I found myself absorbed in the story of the haunted Waverly Hills Sanitorium in Kentucky. Look it up...what a great story about the "body chute," that doctors thought would keep patients from having to "see" death. The mere existence of the "body chute" would have been enough to scare me straight into the grave.
Posted by Clarkson FlatBed at 8:20 PM

That is where Midwood Hospital use to be. Iwas born there in 1962, Your one of the blogs I read religiously as long time resident of Flatbush since 1962, Much of the information on your blog is an important source of historical information.I have a real estate license and until 2011 worked as a guidance counselor for the NYCDOE and much of what CAMBA does is not so great. I hope to include you in the website, The Flatbush Porject