A Cleaner Neighborhood, One Soiled Napkin At a Time

The Mad Mommas of Flatbush, a/k/a PLG Civic, were in fine form yesterday, shepherding nearly 40 volunteers to the task of cleaning up neighborhood streets from Empire on down to Lenox, from Ocean to New York. Barbara/Carmen/Skei/Sheila, pictured below, deserve a round of applause for keeping their eyes on the prize. 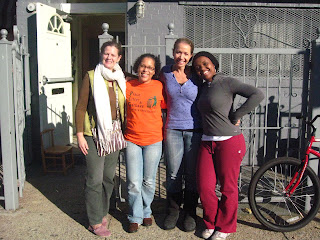 Skei tells the Q "it wasn't so bad out there" this time around. Maybe the blitz of signs announcing the cleanup day helped put people on notice. I tooled around on my bike and the streets were lookin' real nice, though we all know it never lasts. But that's not the point - awareness, public shaming, and most of all coming together to do something that shows the love for our home turf - that's really where the MM's are coming from. Another part of the campaign is letting businesses know their responsibilities, and letting YOU know that calling 311 about repeat offenders is a big part of the strategy too. I've said it before, but if you have a building address that's particularly egregious, send it my way or leave a comment below and I'll add it to the Google Garbage map we're working on. Apparently Nostrand has been heavy hit lately with the litter stick, and this despite vigilance on the part of the Nostrand Merchant's Association. Could it be PLG has a Serial Litterer on its hands? An unSanitary Son of Sam?

Hey, hey, PLGNA holds their annual meeting Monday night at Grace Church, Bedford at Lincoln/Lefferts, 7PM. If you want to hear more about what's going down round yar, y'all better attend. Another crime forum's happening Wednesday over on Nostrand...stay tuned for deets.
Posted by Clarkson FlatBed at 1:09 AM