About a year ago, the Q ignored what he thought was some pretty suspect advice, and walked into a Flatbush Avenue salon (male of course) and asked for a haircut. I wrote about it here, and I guess it struck a nerve, because I received a lot of emails and questions about my experience from people who I normally wouldn't expect to be so queasy about something as straightforward as a regular old hair trimming. But this being Brooklyn, and barbershops holding their unique double role as both service centers and cultural gathering places, I suppose I shouldn't have been surprised.

A few months after that first colorful experience, I decided to try another joint, this time over in the giant colorfully painted toolshed known at the Flatbush Caton Market. I was going to write about it here, and it was certainly a memorable 30 minutes, but the bottom line is that it was the worst haircut I've ever gotten, and that includes the drunken ones by ex-girlfriends. (actually, they weren't ex-girlfriends at the time, so the hatchet jobs weren't intentional. though now I'm thinking it could be cool to start a website where you can digitally give a haircut to an ex, rendering them unspeakably hideous). Basically, Orlando, in booth 28, was an incredibly entertaining, mid-50s-ish Colombian man with super-left political sympathies. Our conversation left me wondering if he'd had to leave South America because he had been barbering to the FARC. In fact, a little research unearthed this disturbingly similar haircut to mine on the scalp of notorious FARC security kingpin Alfonso Canos: 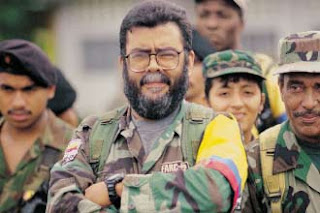 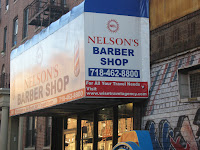 So this time around, and in desperate need of a respectable sheering for a work event that night, I went around the corner to Nelson's Barbershop on Parkside. I've been meaning to go for a long time, and Duane Joseph on Woodruff recommended it, but being a middle-aged white guy I still couldn't escape the fear that I'd be horribly unwelcome in there. Desperation being the mother of courage, I walked through Nelson's doors last Saturday afternoon, and the results were encouragingly similar to that of my first Flatbush cut.

Proprietor Nelson Urraca warmly greeted me, and I sat down and surveyed the scene. I recognized a young kid - Yusef - from my block, one of the youngsters from of an extended family of Yemenis. Even though the shop is way dude, Yusef's sister was there. An old episode of "Martin" starring the inimitable Martin Lawrence was emanating from three audio-visual devices simultaneously, and I guess I'd never really known how talented "MAHHHTENNN" really is, cause we were all laughing our tushes off. The ensemble cast is terrific, and I found myself really respecting the work of Tisha Campbell-Martin in the role of Martin's put-upon girlfriend. But I digress...

There were three guys cutting locks, but I waited specifically for Nelson, and after about 20 minutes of yucks a la Martin he summoned me to his chair with a big smile and a "whaddya doin' today?" and I instantly felt comfortable in his firm but gentle hands. I noticed the diploma from the New York, or American, or U.S., or something like that Barber Institute, and we dug into all manner of conversation about the neighborhood and "back in the day" stuff and I began to feel really silly for ever having gone all the way to Park Slope Barbers for so many years, especially because I could never tell those two brothers apart and one of them was halfway decent and the other sucked but I never knew what I'd walk out with. Come to think of it, they charged $20 and $15 respectively, so I guess I could've just asked how much the haircut was going to be and I would've known which cut to expect, though it would be weird, after sitting down and asking for the price, to say basically "nope! not expensive enough!" and walk out.

Turns out that the Dominican surnamed Nelson Urraca used to be my neighbor when I lived in crack-ridden Prospect Heights in the early '90s. We got a good laugh out of the massive price change in real estate over there...he told me some real sad stories about people he know in high school who were perfectly great and got sucked into "the life" never to return. I often wonder what will be the next killer drug to come along...meth, crack, heroin...they're still around, of course. But they're not new, and new always has a killer allure.

All that to say that I don't think I'll be picking up any lice for a couple months at least...evidence below: 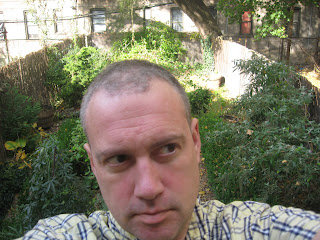 And speaking of crack, the above dude's hair used to reach nearly to it, so we're talking ravages of time here, my friends. Here are two pics from my musical past...one 20 years ago (w pal Rose Thomson of our Babe the blue Ox), the other from yesterdays kids show. And yes that's Oscar (Asa's dad) and Eddie (Tony & Hollis's dad). 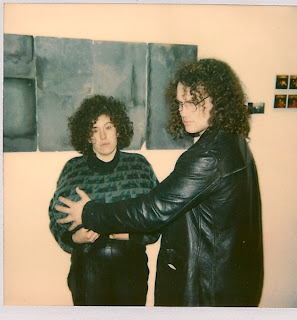 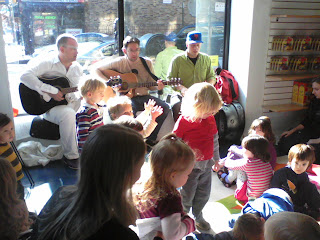 *
above photo by Eggs
Posted by Clarkson FlatBed at 9:23 PM