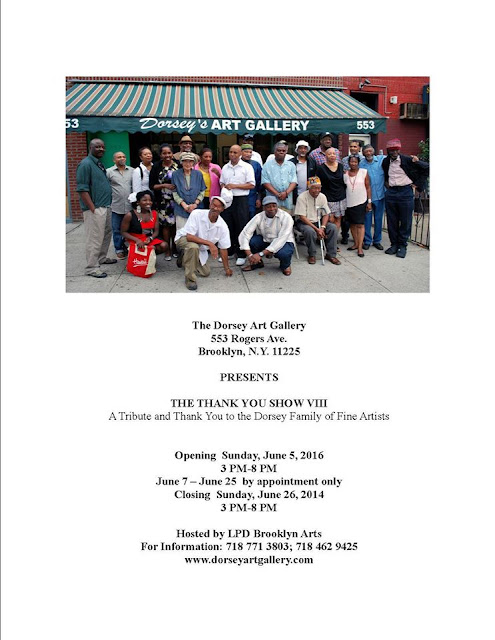 Dorsey's. Ever wandered by the gallery at 553 Rogers and wondered what was happening inside? Now you have the perfect excuse to find out. I mean the street it's on got co-named Dorsey's for God's sake, and that ain't getting undone anytime soon.


Lawrence Peter Dorsey, "High Priest of the Arts," master framer, patron of the arts extraordinaire, ardent collector and devoted mentor and friend to several generations of African-American artists and collectors, died on October 7, 2007 in Brooklyn New York's Methodist Hospital. He was 88.

In the late 1960's, Dorsey met the elderly owner of an art framing store. He became fascinated by the framing business. This fascination lead him to work with and learn all that the shopkeeper could teach him about the framing business. Then, in October of 1970, something happened that would change Dorsey's life and that of so many countless others. The shopkeeper sold the entire business to Dorsey! This was the humble beginnings of the historic Dorsey's Picture Frame and Art Gallery.​ The Dorsey Art Gallery is now the oldest, continuously active, black owned art gallery in New York City.

Dorsey became a master picture framer whose work rivaled that of any gallery or museum in the world. While Dorsey's profession was art framing, his passion was developing, mentoring and promoting African American artists and their works. He was equally passionate about educating, encouraging and developing those who were interested in art, into avid collectors. Literally, hundreds of collectors all over the country got their start at the Dorsey Art Gallery. The shop/gallery was well known for its magnificent art exhibitions, which packed the gallery with visitors who came for the art, the company, the music and the food. It became a haven for artists and collectors from the New York metropolitan area and beyond. Among the regulars were Ernest Crichlow, Tom Feelings, Elizabeth Catlett, Art Coppedge, Bob Blackborn, Otto Neals, James Denmark, Jacob Lawrence, Ann Tanksley, Christopher Gonzales, Emmett Wigglesworth, James Brown, and others to numerous to name.

On any given day, Brooklyn's art community knew that they could always find comfort, conversation, food, drink, an art education, art framing and even watch a game of golf at Dorsey's, at least until they heard those familiar words," you don't gotta go home but you gotta get the heck outta here!

In 2003, Mr. Dorsey's health began to fail and he could no longer run his business. With the consent and help of both Mr. Dorsey and his daughter Laurette, friends rallied around his family in their time of need. This support gave birth to the Dorsey Art Club, the forerunner of LPD Brooklyn Arts. Through their efforts; exhibitions, special events and classes continue to be held at the gallery. Mr. Dorsey left behind a magnificent legacy. His love of art and support of those who create it, was only equaled by the love and support he gave to children. LPD Brooklyn Arts is committed to the continued support of the legacies and traditions that he held so dear.​​

Posted by Clarkson FlatBed at 10:47 AM