Elizabeth C sent over some awesome pictures that show 3 distinctly Caledonian images worth sharing. First up, the Prospect Park "Parthenon" (as the Q calls it in his brain everytime he rides by it) gets a lovely trash makeover after one of its many big barbecue extravaganzas. Btw, you may not know that you can reserve spaces like the Parthenon for events for $25. In fact, you're SUPPOSED to for groups of 20 or more. Personally, I think you should also get a fine north of $500 if you don't pick up after yourself. 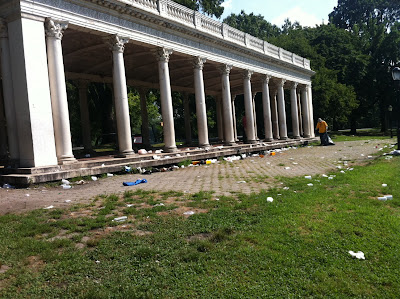 Not far down the road rises "123 On the Park," brick by brick and beam by beam. From the looks of this sign they've settled on the name 123 On the Park at least for filings. I think they could do better...any suggestions? My choice (of course) --- The Caledonian. 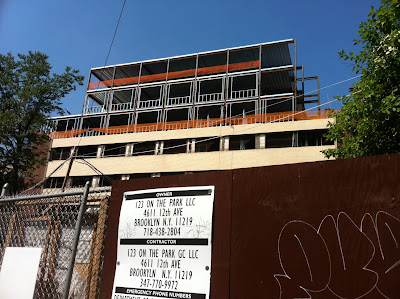 And finally, a plucky (adjective use a grammatical shout-out, you know who you are) Woodruff Avenue resident shows off a brilliant new use for burnt-out pay phones. The choice of periodical is priceless. Nicely done, sir/madam! 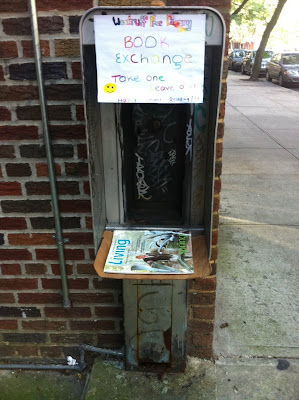 Posted by Clarkson FlatBed at 1:39 PM

I love this book exchange. It's possibly the most civic minded happening to ever take place on my block, outside of uncapping a fire hydrant, or communally setting up a table to play dominoes. I was thinking of making the burnt out telly booth into a planter--it was delightful to have someone beat me to using it in a different, but equally delightful way!