So it's official, and everyone and their step-uncle is talking about it. Flatbush's glory days are coming back, the proof being the renovation of a grand old movie palace, and to a lesser extent, renovations to the old original Erasmus Hall. But as usual, the Q has a bone to pick.

On what planet does it make sense to build the Loew's Kings Theater into a 3,200 seat performing arts venue? This from their press release:

When it reopens in early 2015 the Kings will host more than 200 concerts, dance performances, musicals and comedy shows per year — including programs geared to appeal to a wide range of Brooklyn’s diverse ethnic communities.


First, there's already a venue at Brooklyn College with the exact same mission, just a few blocks away. Second, Brooklyn and NYC generally are teeming with venues, all vying for top-notch entertainment. Filling 3,200 seats is going to be massive task, especially this far into Brooklyn. BAM struggles to fill the opera house. Why would people of a certain means trek miles further into Flatbush to watch "musicals" and "comedy shows?" Has no one heard of a thing called "Broadway?"

Third, what we really need is a movie theater. Have any of you tried to go to a blockbuster film in NY and been shut out by the overwhelming demand and long lines? A first run movie house could do great business, and how fun would it be to go to the movies in a Versailles inspired gem, as if you were going to the opera? With 3K of your neighbors laughing and crying along? Well-planned and promoted revivals of classics could draw too. "Electric Boogaloo" anyone?

A movie theater of such grandeur would be a truly unique reason to come out the borough of Kings and spend an afternoon shopping or dining, if that indeed is the economic purpose behind $100 million dollars in outlays. Plus it wouldn't cost nearly as much in "artist fees," and union stage hands, the very costs that makes running a performance theater prohibitive. Trust me, I'm in the biz. I know!

That's my piece. Here's the before and after pictures, and here's hoping that consider SHOWING pictures: 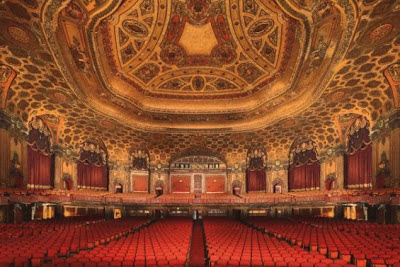 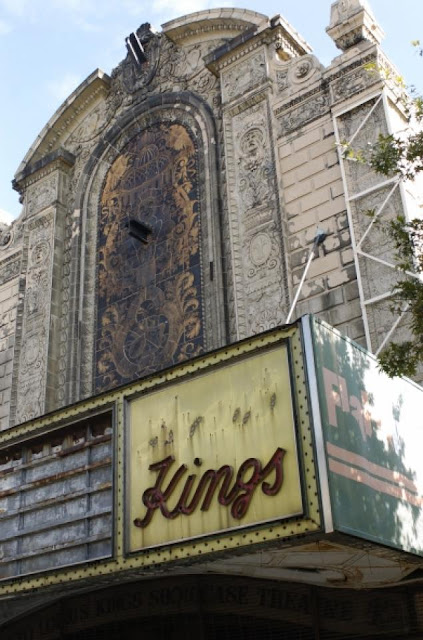 Posted by Clarkson FlatBed at 10:09 AM

I too hope they'll consider showing films. When I moved to Brooklyn in 1970 the options close to Park Slope (where I lived) were mainly the REALLY ratty Sanders at PPW and 15th Street (if you think the Pavilion, that replaced the Sanders is bad you haven't seen anything) or the theaters in Flatbush, of which the Kings was the best (although the Albermarle and Kenmore were really nice too). However the economics of running the Kings as a first-run movie house would probably require cutting it up into smaller venues, as was done (not TOO badly) in the BAM Playhouse. I suspect that keeping the magnificent interior of the Kings as a single venue requires the excuse of "needing" a 3,000+ seat theater. I hope it works out.

I think Bob is right as far as a movie theater operator wanting to divide the space. The Times recently wrote on how Barclays Center fulfills a need for additional arena concert space (http://www.nytimes.com/2012/09/28/arts/music/barclays-arena-rivals-the-gardens-glow.html?pagewanted=all), and it may be that there is also a need for smaller (but still largish) space as well. The Loews would be a perfect alternative to the Beacon Theater, for example.

good point. however, if I were, say, the Allman Brothers wanting to do a series of shows at 3,000 seater, why would I do it in Flatbush rather than Manhattan? Makes no sense...

What about a movie theater that, rather than showing movies every three hours, you did just one show an evening like the theater. And one matinee each on Saturday and Sunday? That could draw at least a couple thousand for the broadest appeal pics. And a movie studio might like the unusual setup and bring movie stars from L.A. for premieres!

I hear these "talkies" are all the rage. Why not give the people what they really want at a price they can afford? Broadway goes for more than $100 now - that's what it costs to make a profit in this day and age. Tix to a fancy night out at the movies could start at $20. What a great date night...

"One show an evening like the theater. And one matinee each on Saturday and Sunday" would be an excellent way to show movies when live events aren't scheduled. his theater [or ANY theater] should be in use as much as possible.

These grand movie palaces were designed for live theater, as well as films.

I actually went to the ribbon-cutting ceremony yesterday and talked my way in. Huge press-corps turnout for Bloomberg and Markowitz. The space is just massive, and there's a surprising amount of detail still intact. As far as I understand it, Q, they are going to show films there, but are also building out a huge extension (actually taking over a block of the street behind) for a high-end backstage area. A big part of the money is coming via the same Goldman Sachs development fund that's financing the massive 1000 Dean foodie business incubator.
The Kings is going to be the second largest venue in Brooklyn. The Houston-based company that will manage it sure seems to know what they're doing, and they've had similar successful projects all over the place. So I wouldn't agree with you that it'll be a boondoggle. And in any event, since it's really, actually, finally happening after decades of decay and neglect, I think we should give it all the support we can.

I actually went to the ribbon-cutting ceremony yesterday and talked my way in. Huge press-corps turnout for Bloomberg and Markowitz. The space is just massive, and there's a surprising amount of detail still intact. As far as I understand it, Q, they are going to show films there, but are also building out a huge extension (actually taking over a block of the street behind) for a high-end backstage area. A big part of the money is coming via the same Goldman Sachs development fund that's financing the massive 1000 Dean foodie business incubator.
The Kings is going to be the second largest venue in Brooklyn. The Houston-based company that will manage it sure seems to know what they're doing, and they've had similar successful projects all over the place. So I wouldn't agree with you that it'll be a boondoggle. And in any event, since it's really, actually, finally happening after decades of decay and neglect, I think we should give it all the support we can.

Honestly, CF, I don't get why you're picking this bone. First of all, when it comes to "giving the people what they really want," I consider myself one of the many people who will delight in walking just a few blocks from my home for "a wide variety of cultural arts attractions including music, comedy, dance, theatrically staged extravaganzas live theater. . ." I can also imagine there to be lots of the "people's institutions" such as schools, churches, NPOs, etc. that will be thrilled to use this historic, restored space for graduations, "banquets, seminars, product launches and weddings" and other special events. (Check out Ace's own website and project description at: http://www.acetheatricalgroup.com/projects.)

How ACE is going to pull this off, I don't know! But they seem to have had their skin in the theater restoration/theater management game for quite some time now. Plus, besides the City and ACE, some pretty heavy hitters like Goldman Sachs' Urban Investment Group and the National Development Council are in on this as well. Doesn't seem like a group of amateur investors who haven't weighed the pros and cons of throwing $93M into a historic theater renovation in Flatbush to me.

You know, we folk on this side of the Park too often find ourselves complaining about how much we get passed over for the development/redevelopment goodies that typically go to other nabes. So,if ACE and the City are willing to sink mega bucks into this project, and if Flatbush, Flatbush Avenue and this historic gorgeous theater in our own backyard get revitalized and "the people" get some jobs as a result -- what's not to like? Rather than seeing this project as not what the people really want, I'm excited that the City has finally chosen to show the people of Flatbush a little bit of love.

I am not disappointed in this at all.
The Allman Brothers seem somewhat tied to the Beacon for the last, oh, 25 years or so, but I don't think that means that we can't attract some more exciting talent to a Flatbush venue. Let the Allman Bros stay in Manhattan for all I care. I don't think anyone really saw the Masonic Temple in Ft. Greene as a viable performance space until that started happening a few years ago, or say, the big pool in Greenpoint. There's plenty of demand for spaces like this. I think we will be very very happy with it.

I see the venues in NYC competing desperately for the kinds of shows that fill 3,000 seats. It's going to be an uphill battle. I wish them luck.

And as long as they have movies, at a reasonable cost, to fall back on, I'll be there. I'm not going to CATS though, or the Allman Brothers, or just about anything else that can fill 3000 seats!

By the way, ACE is not putting up $93 million of its own money. We're on the hook for most of that in terms of city financing and incentives. I'm quite certain that ACE knows exactly what's it's doing, but I doubt they understand the NY market as well as some of the people I deal with on a daily basis. I want it to work, that's why I'm suggesting alternatives to CATS. Brooklyn Performing Arts Center is probably none too psyched.

I like the idea of a first run movie theatre, but that's business model, not a growing one. There's only a few big movie palaces left in the city (Iike the Ziegfield), and they are not doing well. I can't imagine a place this far out competing with a place like the Ziegfield.

A mix of live acts and movies is probably wisest - I just hope no one actually expects this place to turn a profit. I think it's worth having for the community.

The difference between the other perf arts venues and this one is that from what I've seen in the literature, it will have an emphasis on representing the diversity of the Flatbush neighborhoods. I think it's great. These people are very experienced and know what they're doing. Movie theaters don't make enough money to pay for this kind of renovation. This is comparable to Fox Theatre in Atlanta which is mixed use.

The renovation is fabulous. I will be GRATEFUL to take a short bus ride for great cultural events.

I remember going to the movies there when I was a little girl.

The detail in this space is beyond reproach... can't compare in any way manner shape or form to Brooklyn College.

Anything that brings real culture to Flatbush? I welcome it with open arms. I am hoping Barbra Streisand will come once again...