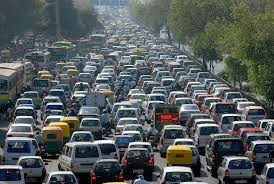 Traffic along the Lefferts link of the Flabenue has been moving quite nicely in the last couple business days, not the logjam of last Monday and Tuesday. In fact, a water main problem at Caton Avenue seems to have caused the bulk of the problem during last week's changeover in traffic design (this from DoT's assessment). So it would appear that the local uproar about the changes by drivers was a bit premature.

However, the ridiculous problem at the Lincoln to Washington left turn persists. We were denied our request for traffic agents, citing their deployment at other areas due to holiday traffic. Fair enough. So we asked the 71st to step up enforcement, and yesterday I'm pleased to report for the first time summonses were issues for those disobeying the signage on Lincoln. According to Vinnie Martinos of Community
Affairs, 25 summonses were issued. There really is no other way to change driver behavior, so it appears.

I for one am thrilled about the relative calm I've seen lately. Traffic is moving with a steady syrup-like fluidity. BUT a sign needs to clearly state the disallowed Lincoln turn, as in "NO LEFT TURN ONTO WASHINGTON ALLOWED," and enforcement needs to continue unabated.

And yeah, we'll push for a more formal request through CB9 to deal with reckless Dollar Vans. Anecdotally, a woman I know told me that as she was riding in a Dollar Van she asked the driver what he though of the new lanes. Clearly it had been slowing him down, and perhaps noticing her color and/or  demeanor, he blurted out "You're the reason this happened!" Trust me, that was not an isolated opinion. I don't need to go into further detail, except to express my deepest sympathies for the man and his loss of his ability to put pedestrians and drivers in harms way. Clearly, he's been the victim of a systematic attempt to destroy his livelihood, even as his paying customer attempted to make convivial conversation. I'm generally on the side of protecting the rights of longtime residents, but this was one time I wasn't buying it.
Posted by Clarkson FlatBed at 8:52 AM

Great news on the enforcement. I saw someone get pulled over this morning, but as they were talking to the guy about a 1/2 dozen more cars took the left and they were not pulled over. The volume of people ignoring (or not seeing) the signs is too high to keep up with. They need to put in more prominent signs.

In terms of the dollar vans, former lawyer for the city council told me that she doesn't understand why the dollar vans are even permitted on Flatbush, as they are intended to make up for gaps in the transit system where there are no other options. Between the buses and trains, Flatubhs is pretty well served. Their presence doesn't make any sense.

To which I'd say - we should be careful to preserve the Dollar Vans as long as they can be reined in. Regarding what I said above, it's really not a good idea to deny people these important jobs, and that really would be the sort of change that would reflect a dominant culture trying to colonize.

AND...I effing love the Dollar Vans when you need a cheap quick alternative to waiting for the bus! So I wouldn't be in favor of legislating them away...

Why not put up an island with the sign "NO LEFT TURNS"? Make it impossible for anyone to disobey the rules.

As for dollar vans, they should be reined in but it would be foolish to do away with them. They provide a cheap and relativity fast commute through Flatbush especially during rush hour where buses and trains become overcrowded. If we can enforce the rules, and redesign some of the roads on Flatbush Avenue, so it forces some of these reckless dollar vans to slow down and yield to pedestrians, it should work. Yellow cab drivers have the tendency to behave aggressively and some people have paid with their lives because of it but that doesn't mean we should eliminate them. Plus, some of them overcharge their customers but at same time, they provide an alternative to mass transit.

That is why you regulate these services.

If there was some unforeseen accident on the rails or a weather related event that effects the whole entire transit system, and the buses aren't running as they should, what are you going to do when you are stranded on flatbush avenue? Not all of us carry bikes to our work place.

I use them often, and I don't think we should get rid of them, but they definitely need regulating. Some of them are notoriously reckless, and often show no concern for pedestrians. I guess it's all about how fast and quick you go to make the mighty dollar.
Also Q I asked one the same question two days ago about the changes on Flatbush (mind you he and I are of the same complexion) and he still gave me a dirty look. I am not a new comer either; I was raised in the area. So I'm not so sure it's color or new vs. old. They simply don't like the change which is preventing them from going crazily fast to make more money. It's all economics.

Maybe they should put an officer at the gas station on Lefferts and Flatbush to stop cars from using that as a means of getting around waiting on the light.

I agree with Rose... to the van operators it's an economic thing. Faster speeds; run red lights; invent new lanes=more trips=more fares=more money.
So if there was a real chance that they might get $200 or $300 worth of tickets in a week, maybe that would have the desired effect. They don't pay the tickets? Impound the van.
And I'd also encourage the ticketing officer to take his or her sweet time, as in, "Gee, something seems to be wrong with the computer. You'll just have to wait until we check your registration. Won't be more than 20 minutes or a half hour I'm sure..."

That happens a lot bossy.

Livery cab drivers and taxi drivers are even worse than dollar van drivers. I don't see the sense in singling out one particular kind of vehicle. If we get the larger, articulated buses on Flatbush it may make dollar vans less needed. Right now though the buses are too crowded too often. Where they need dollar vans for gaps in service - 7th Ave in Park Slope. Has anyone actually ever seen a bus on 7th Ave lately? Did they do away with them? I rode one once and only once because it's the only time one has ever arrived within a reasonable amount of time waiting for it.

Well, they stopped pulling people over after a couple days, and now cars from the 71st are taking the illegal left themselves, often leading a row of followers, so I guess they've given up. Great. I have again written DOT and CB9.

I too am ready to give up. I see making Lincoln one-way all the way to the park as the only viable solution at this point. We lived without Lincoln b/t Flatbush and Ocean for like a year when the bridge was out and I don't recall any issues, so I don't think it would be too big of a deal to make it westward only.

Alex's one-way idea is definitely worth study.
And don't forget that plans are in the works to remake the Park's Lincoln Rd exit into a two-way street in order to access the skating rink parking lot.
(Work to begin in the spring, I think.) In might be in our interest to direct the increased park-exiting traffic either left or right on Ocean rather than straight into the Lincoln/Washington/Flatbush/BP station chaos.