Hilarious Comps I: Get Thee To a Nunnery

From the Q's Cleveland correspondent comes word that in a homey area of "The Sixth City" called Cleveland Heights is currently on the market for about what you'd spend on a 3-bedroom coop on Winthrop Street. Knowing Midwesterners like I do, it's not clear to me how well residents of the "Metropolis of the Western Reserve" would appreciate the silliness of residing in such a home. And yet, isn't it every little girl and boy's dream to live in something like this? 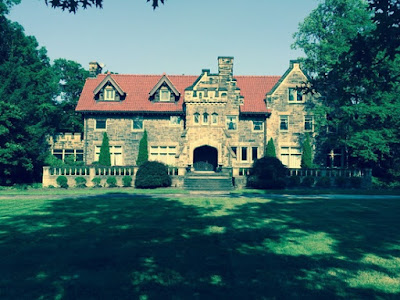 The Cleveland Castle was custom built in 1910 for Joseph Randolph Nutt, president and board chairman of the Union Trust Co. treasurer of the Republican National Committee, and a personal friend of Republican President Herbert Hoover. The Cleveland Castle is in such immaculate condition because it served as convent and was maintained by the Ursuline nuns of St. Ann Church from 1948 to 1983. It is registered as a historical home under the Cleveland Heights Historical Society.

For more pics and pangs of something unsettling just shy of heartburn, take a gander here. The Downside? Living in C-Town, I suppose. Working as a docent at the Rock and Roll Hall of Fame. But on the bright side, as Sinatra's song about Cleveland goes:

If you can make it here, you can probably make it in Green Bay, it's up to you Cleve-Land, Land of Cleves.

For kicks here's a Cleveland Tourism video our correspondent sent not too long ago:


Posted by Clarkson FlatBed at 9:19 PM

Am I the only one who noticed that this property last traded hands for $1.2M in 2005? ...it (and likely the surrounding area) has lost almost half of its value in the last 10 years.

The Q states: "Knowing Midwesterners like I do, it's not clear to me how well residents of the "Metropolis of the Western Reserve" would appreciate the silliness of residing in such a home. And yet, isn't it every little girl and boy's dream to live in something like this?"

Yes, stereotypes are no longer acceptable unless its a smug urbanite sneering at unwashed "Middle America."

Yes the unwashed from Flyover country don't appreciate how "silly" it must be to live in a large, stone house with ample grounds and period architectural detail made by hand. Obviously the rubes can't appreciate the superior value of an equally priced two-bedroom hipster box in Williamsburg where the streets are covered in trash, but you can get a decaf chai mocha latte at 2 am!

The only thing silly about this picture is, as a prior commentor noted, that property values have apparently plummeted on what was apparently once a beautiful estate. I think that type of "silliness" has mostly to do with the fact that so much of Cleveland has deteriorated to an urban wasteland. Is that because of the "silliness" of people who might like to live a castle, or the silliness of a city made essentially bankrupt by years of mismanagement.

The author is of course trying to be whimsical. And he is only poking gentle fun. I just think that the attitudes of so many pretentious urbanites are too perfectly reflected not to comment.