Diana Richardson Got Your Back? Stop By Tomorrow May 21 and Find Out

You want change? You want results? You want politicians to step up to the plate and address the issues that matter to you? Then no more of this complain, complain. Get on board. You're welcome to join the parade, the fight, the dialogue. Don't like what you see over at your Community Board? Get involved elsewhere. Come on down to a new convening of neighborhood stakeholders, to meet with agencies and have your voice heard. It's called "Civic Minded" and the next meeting is May 21 at MS61 on Empire & New York Ave. Follow me on Facebook, people. Come on up to Albany for a protest. Get to know the players, and the enemies. Check out my videos. Let's get real about what's really happening, people!  *

Welcome to the world of Diana Richardson. The above is an amalgam of comments she's made in person or online in her year or so in the State Assembly. If you live 'round here, she's quite likely YOUR NY State Assemblyperson. Smart, hilarious and sharp of tongue, she is exactly the right leader for the right times. She's 33. No, that is not a misprint. The way politics work in NYC she will likely be in our lives for a long, long time. So why not get to know her before she becomes, I dunno, governor or something in 2041 or some such.


Start chatting with her and you KNOW she's a local girl. She know everybody who's been here more than 10 minutes. I first got to know Diana as the brash voice talking tough at Community Board 9 meetings. She ran for Treasurer after the long, long time Treasurer died, and she wanted to open up the books and see what was really going on in the District Office. With an annual operating budget of under $200,000, the answer was...not much. The office is just an office. It's the person doing the job that matters, and I soon learned that many on the Board did not care for longtime DM Pearl Miles personally. (The fact that she was damn good at her job didn't matter much, and she was tossed last Fall once the numbers were against her and a new Chairman was in place following nearly 30 years of the Pearl & Jake Show. Chairman Goldstein, it turns out, was NOT as popular as one would have thought. But I still love him and enjoy every chance I get to talk to him. Stories, he gots stories!) So despite the fact that there was little to unearth as Treasurer, it was clear that DR was an ambitious voice in local politics. Having worked under longtime State Senator Kevin Parker, she knew the ropes. But the power players - like Eric Adams - didn't think she was ready yet I guess. She thought otherwise.

You get tell DR was going places. The surprise abdication of Karim Camara from the NY Assembly  seat sent people scrambling to fill the role. A hilarious screw-up led to no Democratic nominee, and Richardson roled into office past Shirley Patterson, Geoffrey Davis and one-time candidate Demetrius Lawrence, now unpaid overworked Chair of CB9. The victory meant single-mom Richardson was off to Albany. Luckily she had her ducks in a row, some good advisors and a cat-like sense of readiness for the Ways of the Wolves. Because as she described to me in a recent sit-down, they don't exactly welcome you into the old boy's club. Even if you're an old boy! There's no "how-to" manual. You have to get your bearings quickly and on your own, follow the leaders, get in with the cool kids, brush up on your lingo and ask, ask, ask. Thankfully, your pol does not suffer from shyness, and she's been able to tackle tough bills, make important friends, bring home some bacon, and become part of the all-important movement to take back the Legislature for the Democrats. For as followers of Albany Football well know, the City is forever beholden to Upstate Republicans who love to deny NYC its due. And one of the biggest issues for Downstate legislators has been the absurd reality that the City's rent laws and many development agencies are State controlled. Leaving the City with little recourse to deal with runaway rents, building and land prices. That can change, but only when the Dems are in the lead.

So unlike our Councilman, who seems to grasp issues the way fists grasp water, Diana knows precisely what's at stake and what course to take. And by gum she might have the tools and personalities to make some breaks fall our way. (yes, sometimes it takes more than one personality).

After talking with her for an hour at her District Office recently, I decided to pretend I was writing her platform, based on her comments, videos and things I've read from her online. Okay. Here's my 5 Point DR Agenda:

By housing, of course I mean keeping people in their homes, creating more opportunities for low income housing, ending predatory practices and preferential rent spikes and more City control of our rent destiny.

By empowerment I mean that folks in our community, young to old, need to dig deep and find the inner resources to go out and believe in themselves, from education to jobs to spiritual fulfillment. That might sound squishy to you, but I assure you that many people in our community could benefit from a world that values them, their potential and their contributions.

By activism, I mean DR believes you can't just sit on your duff and complain. By getting out there and making your voice heard, you can be a guiding light for change. That's about empowerment too.

Violence is a plague, a disease worth curing, and you make it your goal to end both the symptoms and the causes. In one year she's already brought home resources to fund anti-violence initiatives that are less about brute force and more about community based policing and solutions.

Youth. Self-explanatory. Nothing changes for the better without investing in the future.

Go to her Assembly site and you can see her videos and get to know her personality a bit. If you can stomach The Facebook, then check out her feed.

Feel free to disagree. But I think DR is the real deal, and we should encourage her to act in the interests of all. See something you believe needs to be changed? Let her know. Get to know her. USE her. That's why we set up this whole damn republic in the first place. 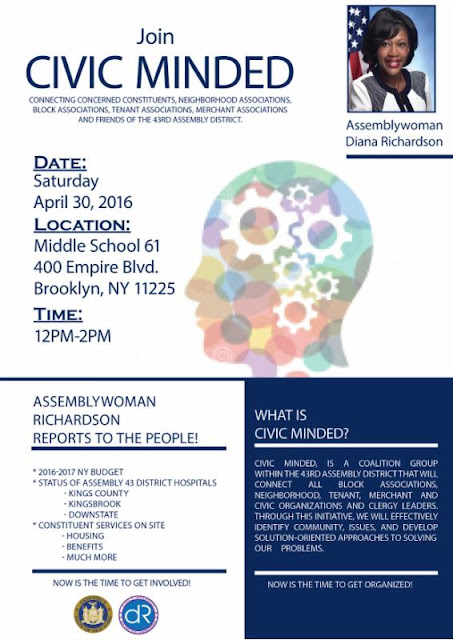 Posted by Clarkson FlatBed at 1:45 PM