It's kind of remarkable, in a Trump-administration sort of way. The anger, misinformation and downright surliness of the Community Board and its committees and their attendees has officially entered the realm of absurdity. After arguing with DOT over crash stats, asserting they know more about how 18-wheelers turn corners than those "useless" compute simulations, insinuating that buses cause traffic jams that are actually caused by OTHER drivers parallel parking, and fighting common sense fixes to long-standing safety problems, this last one is outrageous even for this longtime bystander and ex-board member.

Get this. The Transportation Committee managed to so botch its vote for upcoming road repairs to Franklin Avenue south of Eastern Parkway that they actually wrote themselves out of a bike lane that there is PLENTY of room for. That's right. After noting that they are REQUIRED to reduce the car travel lanes to one from two since the street is too narrow (what with double-sided parking), the board actually screwed us out of a dedicated bike lane to continue the Franklin bike lane in CB8 north of EP.

I'll let Rachel at DNA tell the story. I'm too pissed to even retell the debacle. If a bicyclist or pedestrian is killed or maimed because of these fools constant pro-car posturing, I hold them personally responsible.

Ridiculous. We deserve better. Actually, our children, seniors and non-car urban travellers (the majority by the way) deserve a wholesale change in the board, which is skewed well over 50, home-owning and car-driving. And surly beyond belief. At the full board meeting, speaker after speaker spent their moment in the spotlight to bash bicyclists. Whom let's be honest often ride unsafely. But even when they do, they don't mangle your car the way your car can mangle a bicyclist. 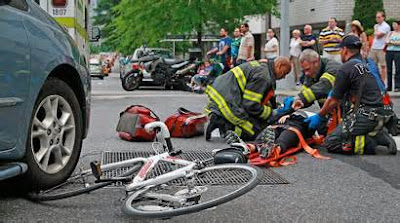 Posted by Clarkson FlatBed at 9:48 AM

Some cyclists do ride unsafely, and do make it hard for cars. But if they had a bike lane, then it would be easier for cars since bikes would be confined to that lane rather than driving all over. The drivers who complain about bikers in their way would actually be served by a bike lane. But they would rather have everyone suffer, so long as someone else is suffering more. Sad!

Ridiculous! CB9 is one of the most pathetic boards we have. They are so dysfunctional and inapt. So what are the chances of moving forward with this?

Send a note to Laurie Cumbo. She trumps the CB and has a reelection campaign coming up with a serious challenger.

FWIW I'm one [well] over 50 car-driving homeowner who favors bike lanes, possibly because I used to be a bicycle commuter when I worked in lower Manhattan (or maybe because I'm not a complete idiot). I do wish there were more protected bike lanes though; I'm skeptical about how much safety a painted line provides–IMO many bike lanes just provide an illusion of safety and encourage cyclists to sometimes abandon common sense.

I hear you Bob. But no one needs ask whether suggested markings provide an illusion of safety. They are there to be followed by all. When they aren't, trouble ensues. Car drivers seem to think that bicyclists impede them somehow. I believe that bad drivers are generally mad about one thing or another, or buzzed, or distracted, and take it out on the rest of us. Excessive honking, road rage, running lights. Talk about the pot calling the kettle stainless steel.

Bad drivers give y'all a bad name. But they're hardly an endangered species. Showing them where the bikes are meant to go, and where they're NOT supposed to go, is dumbing it down to their level. And there's a lot of dumb drivers out there.

Most important fact: 2,000 pounds of steel needs to be managed safely.

I think the DOT should only treat the CB as advisory and just go ahead with the plan. When it comes to designing our city's streets, why should a group of NIMBY know-nothings have the final word?

AlexVee, that's what DOT is supposed to do! CB's serve in an advisory capacity on ALL matters, which is why it is so sickening that ours continually succeeds in depriving our community of resources.

"there's a lot of dumb drivers out there",

Indeed there are and most of them are oblivious to things like painted lines showing where they're supposed to go. Sometimes I wonder how many of them answer to their own names. When you combine that with ALMOST equally oblivious bike riders trouble really ensues. Not that the drivers aren't usually at fault, but bike lanes should be for more than establishing liability.

What is remarkable about CB9 being inept?