Finally, Some Kick From the "Other" Side

So few folks seem to want to believe that fighting new housing is also fighting affordable housing. That's fine, they have their reasons. But economics, history and actual renter's needs should not be primary among them. Planning experts don't buy that homeowner NIMBYism and downzoning are good for prices and rents. Restricting supply is not a viable alternative to rapid gentrification. The Mayor's much-demonized MIH plan REQUIRES that below-market permanent housing be added to new buildings. But that's when you start to realize how selfish it is to fight ALL upzonings. Should be smart changes, for sure. Combined with contextual downzonings. But that ain't the way the winds been blowing. Here's a much-needed alternative perspective from Neighbors for More Neighbors, and a hilarious PSA to boot (thx MikeF) 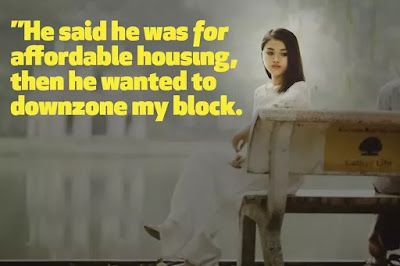 Posted by Clarkson FlatBed at 10:33 PM

While there are many rational and reasonable arguments against so-called NIMBYism, when it comes to housing density I thought that much of these Minneapolis artists criticisms were a gross caricaturization of the ideas of pro-preservation people, like me.

agreed, Bob. That's why my attitude was always to strike a balance. Not every street or block deserves landmarking or downzoning. But in combination with a net gain of units, you can satisfy both goals. But you can't grow a city if no one accepts growth. Actually, you can. But you make a lot of enemies unnecessarily.

To give you an example right from my own block. We would be happy to downzone the attached row houses and allow affordable housing in the vacant lots and tear-downs. They're being torn down anyway, so why not get more below-market units? For a couple or three more stories of height, I don't have a problem with that. No one I've met wants 25 story towers - anywhere. But to not open obvious spots like Empire is just plain obnoxious.