I'll get to that provocative title in a minute. First...The neighborhood report.

Tonight CB9 and various community members expressed their near-unanimous dismay that Cornell Realty hopes to build 17 stories on Franklin near the Botanic Garden with well over 500 units, 25% of which will be "affordable," or rather means-tested. They'll be $1000 or less, even for two-bedrooms, so when someone asks "affordable to whom" just say they are a shit-ton cheaper than what you'd see on Craigslist and leave it at that. As I've said in these meetings they are NOT for the poor. That would be public housing, and hey I'm all for buiilding that too, unlike many of the so-called champions of the little gal who when it comes down to it really just want no new people, and particularly not people that aren't to their liking, which it doesn't take a leap to say is middle to upper-middle class whites - the neo-colonialists. The developer noted that The Q was wrong (yes, unlike the prez, I can admit it)...the Spice Factory is NOT a part of the upzoning request. Oh, and the Garden, remarkably, had little to no comment - it's rep said BBG has no opinion on matters that don't affect it. Hmm. The environmental review showed that there are virtually no shadows cast on the Garden throughout the day and year by a 17 story building on Franklin, so apparently the BBG doesn't care that it's views from within get sullied, even though that was the whole reason the area was downzoned 25 years ago. Go figure. Oh yes, and confirmation received that rents on the Flabenue are nearly double what they were even five years ago. And yes indeedy they're letting things stay vacant til they get the big bucks, oh and a well respected Cake dude is opening a bakery near 626. Generally though it would appear only gentrifier-friendly joints need apply. Double the rent; wow. Like the apartments on my block, which are now officially TRIPLE what they were when I moved here 14 years ago. The only kind of doubles we need around here are those delicious little curried chickpea snacks from De Hot Pot. And the only kind of triples? Dunno...the only culture I know that makes triples is America. The Big Mac. Three layers of bun. Ray Kroch was a genius. Three buns!

And in other, broader news: 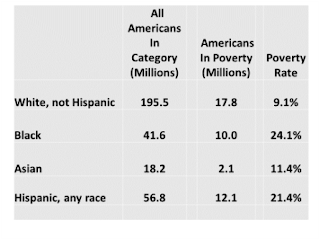 It occurs to the Q that much of what we as a nation do is gossip. The Q is guilty as charged. It seems a particular keen, maybe even crucial, way to differentiate ourselves from others, helping to define our tribes. Sometimes it's harmless (she's got a serious pants problem) or viciously hurtful (he's a big fat loser). Lately I've been noticing, once again, that Americans of all sorts have a real problem with the poor, and seem less and less afraid to express their displeasure, even in polite company. I came across a 2016 table (left) that worked its way into my brain and set up shop. It's a simple set of numbers and should come as no surprise to anyone. But with the current state of affairs I can't help being jolted by the fact though black Americans are 2.5 times more likely as whites to be poor, there are still almost twice as many whites as blacks who are poor nationwide, and that's a lot of votes, potential or realized. I tend, and the liberal-ish media tends, to focus on the first fact, and it is of course a continuing national disgrace. But so is 17.8 million white poor people, in a country that boasts dozens of restaurants with tasting menus topping $500 before wine, tax and tip. And country clubs with $250K initial membership dues. And, well, the absurd wealth of the entire cabinet of the new administration.

And if such obscene disparities of means weren't quite enough, doesn't it seem almost conspiratorial that poor whites and "minorities" should be so manipulated by pollsters and pols and religion and universities that they are corralled into neat political boxes of left and right by media and moneyed elites on both sides of the aisle? It would seem that people of limited means would have enough in common to break out of the bonds of Elephant and Donkey. And yet, somehow, we're still in a golden age of blame, whether for Trump Racists or Welfare Queens, White Trash or Hoodied Hoodlums. I've been party to many a white-trash trashing conversation and til recently I barely raised an eyebrow. And hell I was raised among 'em, though truth be told I heard nary an anti-immigrant or anti-black sentiment in my youth. Maybe some ignorant jokes here and there, misconceptions, even stereotyping. But rarely downright mean and offensive. The real white national types were out there, but you stayed clear of those folks. They were the minority then, and Representative Steve Kings accounted for, they're still the minority. It's true. Most people I knew grew up with love in their hearts, and a certain reverence for the civil rights era, and sure they don't always vote the way you'd want them to. But plenty do, and still do, and the ones that don't well, sometimes they're as susceptible to bullshit as the rest of us. Mostly though, Republicans vote for Republicans and Democrats vote for Democrats, no matter who's running, and whoever fires up even a fraction of the country to get out there will take home the mantle. It's true. NO REALLY. Barack Obama won Iowa in the first delegate race in Iowa in 2008, and went for him twice in the general. Oh, and my year's homecoming king was black in a town with, I dunno, maybe a couple dozen African-Americans all told. That's not to say folks didn't harbor their ignorant feelings. But they weren't threatening to eradicate anyone. You read that shit now; it's been given a legitimacy I couldn't have dreamed possible. All because of one loudmouth asshole who proved that, yes, ANYone can grow up to be President.

It's amazing to me how the center holds even as all hell breaks loose around the fringes. Now with the Antifa and Neo-Nazis on the rise, the media cling to a narrow reading of political bickering, much of which is so familiar it reeks of smokescreen. Is the healthcare debate really as good as it gets? A compromise on the left or compromise on the right, that seems destined to fail and will need fixing again in four years? Maybe it's time for a real discussion. In this country, or hell, in ANY country, people want to make a decent living. By and large they WANT to work. Hanging out on The Corner or at the Kum 'n' Go gets old real quick. A guaranteed income for work, whatever the work, starts to make a lot of sense. And with the robots on the rise, will there be much work to do at all? And weren't the robots supposed to SET US FREE? For more leisure and/or hanging out on the corner or at the Kum 'n' Go? Or at the $250,000 golf club? 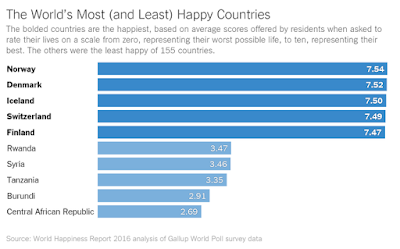 It's not that hard, really. And yet, it is. Advanced capitalism. And in my house with hot and cold running drinkable water, curb-side garbage and recycling, organic honey and frozen Edy's popsicles, and healthy children and a decent-paying job - I've got a lot of damn gall calling out poor folks for being poor, ignorant or gullible - even if they voted for Trumpy. And yet...I'm pretty sure that's what we've been doing, politicians, media, home-owners, police, TV, and the tone-deaf social-media echo-chamber of which I participate, on the left or on the right, not recognizing the three-dimentional nature of contemporary America. A bunch of babies we are, stewing in our own diapers.

Oh and if you're looking for a rent-stabilized home under $1,000 a month near the Park and Garden, well, we're more concerned about a few shadows, secondary displacement and increased traffic than your sorry ass. Go be poor somewhere else. We've got density to worry about.

Walked by today. I guess I answered my own question. https://www.jjdcakes.com

You desperately need a course in economics. Desperately. FREE universal healthcare? FREE? Who pays for FREE? You've come a lot closer to describing Cuba than Scandinavia. And you said you recently visited Cuba. As a result of seeing for yourself how things go when the government is in charge of everything, you should know the Cuban way has its problems.

Try Venezuela. Chavez. What a guy. And Maduro. They both got it in their heads that all they needed was money from selling oil. They believed the oil money would carry Venezuela forever. Then -- after American oilfield innovators advanced hydraulic fracturing -- the US became the swing producer and OPEC was, to its own deep shock and mortification, put to sleep.

With oil at $50 a barrel, Venezuela can't pay the bills for all its social programs. Gasoline was about 7 cents a gallon. But toilet paper? Now, it's almost impossible to find toilet paper.

Saudi Arabia is in the same boat. In a few years, the kingdom will run into the same problems if the Houthis from Yemen haven't overthrown the monarchy.

None of the OPEC nations manufactures anything. They collect oil revenue and spend a lot on social programs and some to import all the stuff they need but don't know how to make.

Scandinavia. Norway should be the model for Nigeria. Norway is home to 5 million Norwegians, who all speak Norwegian, who all belong to the Church of Norway and who all share the same cultural views. A monkey could run that country. They consume 10% of the oil they extract from the North Sea and sell the other 90% for the rest of the world, including a few barrels for us.

But Norway is also home to real businesses. Global shipping, for example.

If there were only 5 million or 10 million Americans, and we produced our current oil output of about 9 million barrels a day, we'd have that little utopia you're dreaming about. But there are 325 million of us. So when it comes to oil revenue, it doesn't go that far.