UPDATE - SEE BELOW: Adorable Cat Seeks Free Room and Board for Life

see the bottom of the post for the "rest of the story."

Someone dumped this cat when they moved out of their apartment: 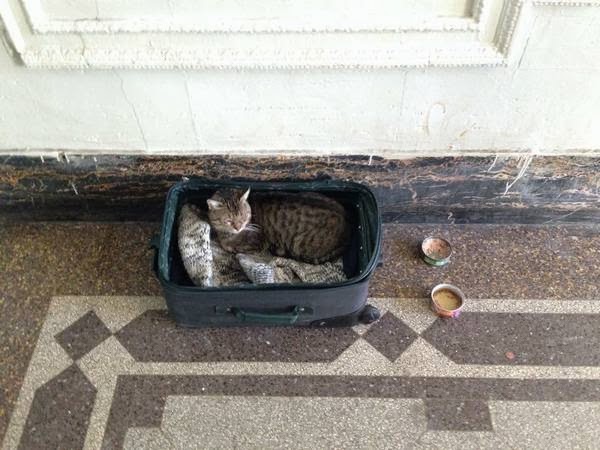 Here's what the poster says:

So, I live right off of the Winthrop Street subway stop. Someone in my community moved out right before the blizzard and just left their cat in the lobby. Predictably, management evicted the cat and she's just been sitting out in the patio area, freezing, and waiting for her owners to come home.

She is the sweetest cat in the world. I have seriously never encountered such an affectionate animal. Unfortunately, however, I am not allowed to have a pet by conditions of my lease.

I called animal control and they said they'd euthanize her within 72 hours if she isn't adopted, so I'm trying to find a better option than that. The only no kill shelters in this borough are full-up.

If anyone at all is interested in helping out or has ideas, please get in contact with me, either via email or via phone. I really want to save her.

Later today, I'm sent a note that the ad has changed to this:

So, my craigslist post about this cat went absolutely insane viral. My phone has not stopped ringing. Here's how it went down.
When my roommate flipped his shit at me and told me to get rid of the cat, I put her in the lobby and realized she might be a he. The cat, heretofore known as "him," had balls. Whatever.
I put out food and water and commenced my internet search for rescuers. Around 7, I got a very nice man and his wife who were both calling me to arrange pick up. I went downstairs to check on the cat and saw a much smaller version of the same cat in the area where my cat usually was.
Fuck.
There are two of them.
Well, that was okay. I was getting so many calls I could arrange two adoptions. However, big, has-balls cat was not around. He had presumably gone to get some food for the evening or found a warm place to sleep. Two of my neighbors admitted to trying to bring him in, so maybe he found lodging for the night.
The nice man came anyway. His name is Rob. There was also a nice lady with five pets of her own from a rescue society named Debbie. She was interested in Smaller Cat with a Cough. We'll call it Mini-Mew.
By the time they get here, it is 5 degrees outside. I have set out tuna and water, both of which are cubes of ice now. Mini-Mew and Has-Balls are both gone. We walk around calling for them for a while to no avail.
Then my landlord emerges like Jesus on the Water from the basement. His name is Hector. I ask Hector if he's seen either cat, and he says oh yes, he let them into the basement.
Then he drops this: "The apartment has holes in the walls, so they are in the walls during the night. They will be back in the morning."
The apartment. Has holes. In the walls.
Do I pay rent here? What the fuck?
Whatever, I'm just glad they are accounted for. I exchange numbers with Rob for Has-Balls and Debbie for Mini-Mew.
They will be back tomorrow to retrieve their respective adoptees. Hector has promised to keep the cats in the basement until they arrive.
I will update when all is settled.
In the meantime, my phone will not stop ringing. Lots of people keep telling me that Craigslist adopters are going to do sick things to my beloved strays, but I don't think Rob or Debbie are psychos, so we're all good.
Now please, take my number off of facebook.

The Q has a sneaking suspicion of what might have happened here. Eagle Eyed Michael S might that be you?
Posted by Clarkson FlatBed at 2:56 PM

I saw a small tabby on Hawthorne/Nostrand... couldn't get close enough

If the super put the cats out on the street not in the basement then needless to say the cats are not safe. Hope the small tabby spotted on the street wasn't the smaller of these two cats.

I looked for them tonight. No sign of them.