On this particularly trashy Flatbush commute, I'm reminded of the oft-heard complaint that we are a neighborhood of litterers. While I don't dispute the claim, it is not, in my opinion, the litter that causes the trash problem. It is the dumping, and the lack of simple cleanup by merchants and landlords along the Flabenue. Because we haven't got a BID doing regular cleanup, we're stuck with what we got.

Dumping includes leaving big bags and stacks of trash at corners and in tree pits and next to buildings. Over the last few days, a Trash Vigilante on Ocean has been sending me pictures like this: 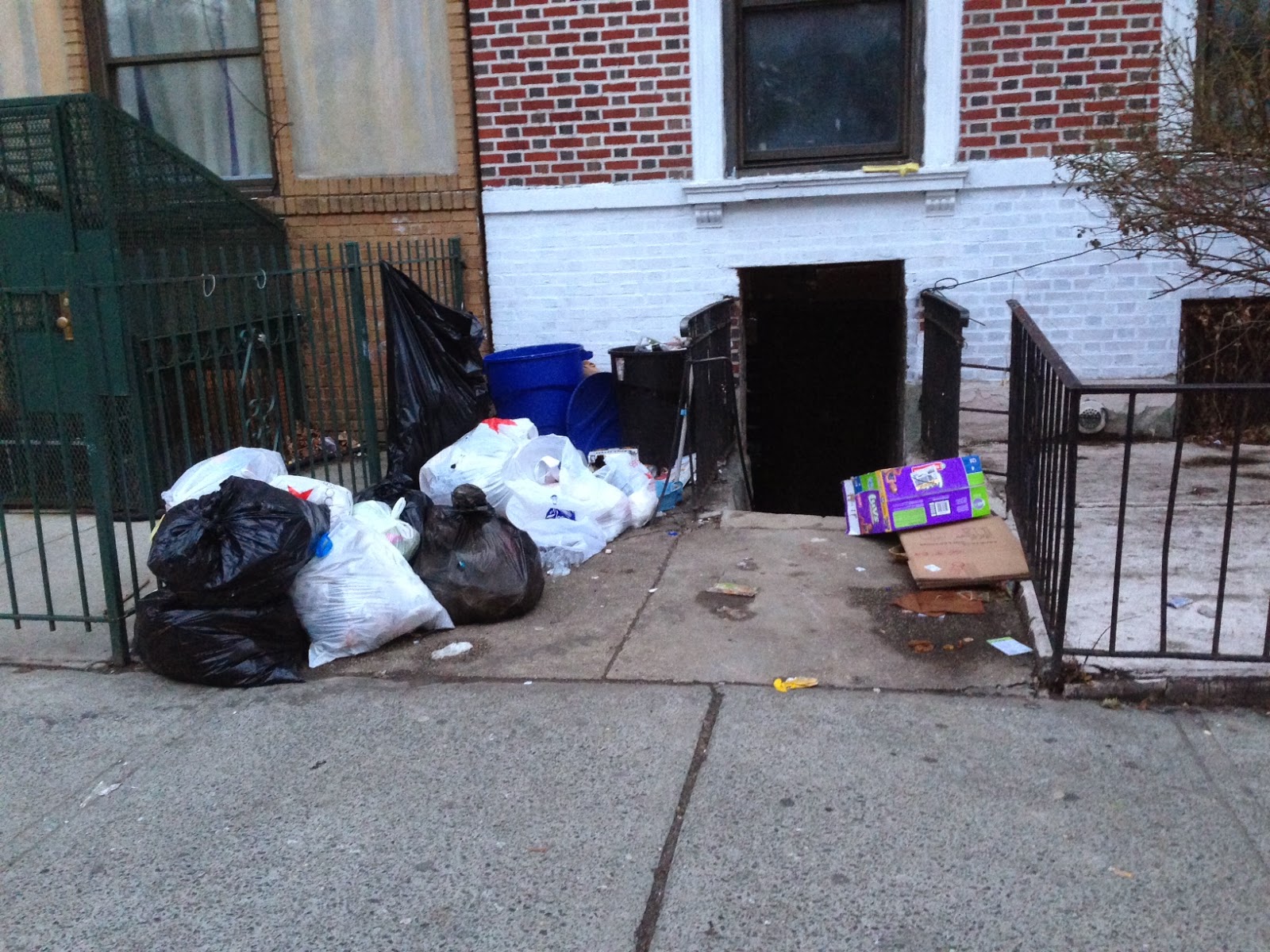 Besides being a health concern and despite the fact that wind can easily blow debris all down the street, this kind of thing just encourages more dumping and littering. These photos have been forwarded to Sanitation with promises of greater enforcement.

I'm heaping mad at this stuff. It degrades the neighborhood and shows complete lack of respect. To me, this is not an issue that invites division among neighborhood residents. Rather, it's something we can all agree could make the area much more livable. That's why I may come off as...obsessed(?) about it.

Posted by Clarkson FlatBed at 9:47 AM

The photograph looks like it might be of residential trash brought out by tenants of the building. IF that's the case, I'd fault the apartment building management for not making a better provision to collect garbage.

Tim, I totally agree. It's really sad that in NYC these days you have to create a special organization just to ensure that a neighborhood receives the most basic of services. While I do hope that efforts underway to get a BID started pay off, we shouldn't need one to receive adequate attention from Sanitation.

And just a note to those who think Park Slope, Prospect Heights, Bed-Stuy and Crown Heights became cleaner because of the folks who just happened to have upscaled it recently. It's been the combined efforts of local folks, block associations and merchants groups. In other words, the collective work of the people who care. Vanderbilt used to be a shithole, for people who have long memories. So did Franklin. Even Park Slope was garbagey.

I live right by this garbage dump on Ocean and that is actually pretty clean for the building. I have filed numerous complaints through 311 online about this building and nothing seems to happen. This is the way the super maintains the building. He does not put trash into larger bags but simple throws household bags (usually untied) into this area.

Is there a more effective way to complain about this?

What is pictured is a disgrace. Does anyone know what company manages the building and/or who the landlord is? I would think a constant bombardment of calls and emails to the management company or landlord may help remedy this specific situation.

Yes, JDB. And it's been issued through an official complaint by the Community Board. Sanitation must now demonstrate that it's taking action.

HOWEVER, it would be extremely helpful to have neighbors talk to the super. Or, if you're feeling shy, try putting a flyer and attaching it to the garbage that says "please clean up this mess. your neighbors are tired of it." Leave it every day you pass by. It will be a source of amusement for passers-by as well.

The landlords and storekeepers are certainly remiss; but how do we deal with individuals who allow garbage to accumulate in the tree pits in front of their houses and those who place their household garbage in the cans along Flatbush and Bedford?

There seems to be a lack of pride in their surroundings or standards of cleanliness or whatever, by everyone who is contributing to or tolerating this situation.

The responsibility in front of buildings is very clear, particularly in a very dense neighborhood like ours with primarily renters (the single-family Manor blocks are NOT the problem here).

Blaming individuals is gonna get us nowhere.

I'm the trash vigilante, though maybe I'd prefer another title. This is the only building I've noticed that's a problem on Ocean between Parkside and Lincoln. And as another commenter noted, the picture is from one of the cleaner days. It's usually much worse. Why not focus our energy on this problem building until we've had success, then move on to the next one.

I've noticed success in calling the DEP AND the management companies of the buildings. On occasion I've offered to send pictures. I mean, supers and porters get paid to deal with stuff like that: management usually wants to know when they are throwing their money away. Not every time, but an encouraging amount.

I will certainly start to leave some flyers but the super for this building is not very helpful. Unlike the other buildings on this stretch which have really wonderful supers.

Not to say that Sanitation shouldn't act, but there is the carrot as well as the stick, and self-help in addition to waiting for someone else to look after your building.

How about one of the tenants of the large buildings advertises to put together a small fund to privately pay the Super to rebag the individual bags more neatly?

The Super would probably do it for $20/week plus someone provides the bags.

Particularly in the larger buildings, it would probably take some investment of time, and yes someone else "should" do this for you (building owner) but you could probably sign up 20 or more people to contribute $20 each to such a fund, which would get you about as many weeks of an improved situation.

I've also often thought that you could probably recruit one of the homeless guys once a week to do litter patrol for $10 or so, which I would most certainly do if I lived right on Flatbush.

Yes you will have some free riders, but you also have free riders if you put flowers in your window box (others who don't do the work or pay for them will enjoy them).

But I do think that the tenants of the large buildings on Flatbush and the Flatbush I blocks could do a lot more to organize their own building trash, by taking a bit of initiative to do so.