IDENTIFIED! Do You Know This Man? Jogger Clings to Life 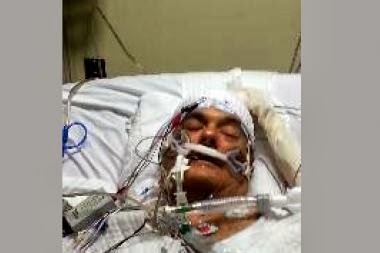 See this story for the good news on his identification. Godspeed.

If this guy looks familiar, and you know him to be someone who jogs in Prospect Park, police want to know what you know.

The man, who is believed to be approximately 60 years old and has thinning gray hair, was spotted running in Prospect Park on Dec. 31, police said. He collapsed about 1 p.m. and was rushed to New York Methodist Hospital, where he was in critical condition, according to police.
The man had no identification on him and was carrying only an asthma inhaler, the source said.

He stands 5-foot-9 and weighs 200 pounds and has brown eyes, police said. He was wearing blue jogging pants and jacket, and black, size 9 1/2 Adidas sneakers when he fell.

Call 911 and tell them you may have info on a Missing Persons case.
Posted by Clarkson FlatBed at 10:27 AM

Wow, that could be me. Actually, dying while running in the park would be my preferred way to go, but not until i'm at least 99.

The man, who is believed to be approximately 60 years old and has ... joggerspantsformen.blogspot.com

The man, who is believed to be approximately 60 years old and has thinning gray hair, was spotted running in Prospect Park on Dec. 31, police ... joggersmen.blogspot.com