Now THAT Is a Meeting

Whoa Nelly! Move over Yalta...there's a new conference in town and it's name is The Parkside-Empire! After years of fitful starts, a true merchant's association was birthed today at none other than Dr. Cuts. The good doctor was in, Desmond Romeo, and he presided as the newly elected president of the Flatbush Merchant's Association. The other elected board members included Exec VP Shelley Kramer of Play Kids, VP of Communications Joyce David Esq, Treasurer Jesse Gomez of 30 year merchant Gomez & Gomez, and VP at Large Tammy Merlain of Human Hair. The meeting was joined by many merchants, neighbors, some CB9 folks AND the Director of Economic Development Dale Charles of the Pratt Area Community Council. You see, the PACC is helping organize and assist the Merchant's Association in its quest to finally bring together the feisty ragtag assortment of businesses that call the Flabenue home. Yours truly, wearing the hat of sanitation chair at CB9, blah-blahed about trash on the avenue and how to rid ourselves of it.
Before reading any further (farther?) please go to their Facebook page and "like" them. Le Facebook page.

The Q's been watching helplessly for the past many years as a group has tried to get off the ground, and tonight I believe he (I) witnessed the beginning of something truly marvelous. Sandra from Tafari Tribe was there. Richard was there to talk up D Avenue, his latest bar to sprout at 673 Flatbush. Michael was there from the Fen Empire (65 Fen, Delroy's and PLG Outpost). Which reminds me to say that the businesses just off the Flabenue are included, plus Lincoln Road and hopefully Parkside. Because the Flatbush BID ends at Parkside from Cortelyou Road, and doesn't include the Parkside businesses.

And who runs the BID now that Jack Katz, the old-school style leader of decades, has passed on to the great Street Fair in the Sky? Her name is Lauren Elvers Collins, and she holds the titles now of Executive Director of both the Church Avenue BID AND the Flatbush Avenue BID. This super-slick move should create efficiencies, one would think, and she does think it too.

I had lunch with Lauren last week at Am Thai, the delectable restaurant on that very Church Avenue near Lark Cafe, either of which many of you have probably stumbled into a time or two. That little section of Church Avenue almost to Coney Island Avenue has become quite the Little Economic Engine That Could, and a new bakery just opened up called, um, um, shoot I can't remember. Looked super cute though. Since I stole the picture to the right from Ditmas Park Corner I really should just link to their brief article about Lauren here rather than pretend I staged that shot myself. Thanks Nora!

Speaking of Am Thai, here's their delivery map area. Guess the Q's gonna be drowning in the Tom Yum while some of you are plum out of duck basil. 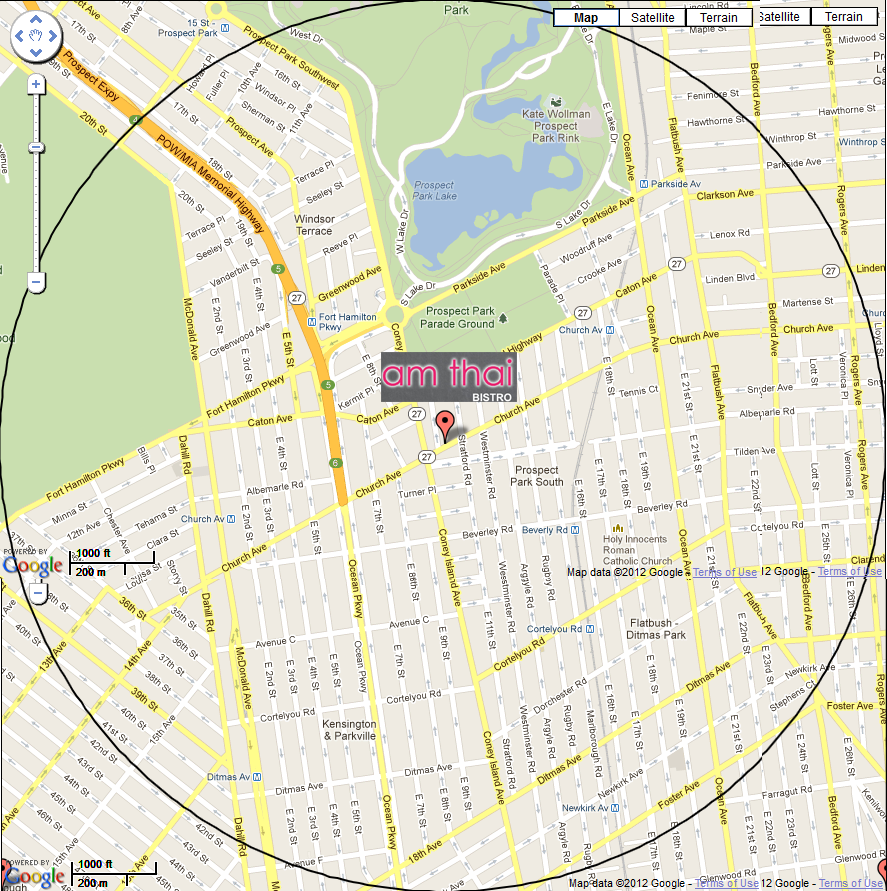 However, I figure that since according to this map about 20% of their delivery area goes to dead people in Greenwood Cemetary or squirrels in the Nethermead, they could probably be convinced to deliver throughout Lefferts. Anyone had any experience with their delivery radius? Amy who owns Am Thai assured me that sweet talking can do the trick, and promises of a nice tip.

Anyhow, Lauren's great and I'm sure she'll whip that beleaguered Caton Market into shape, among other things, so so so many other things. Visit the Church Ave BID site here, and remember to tip your delivery person well. All of your Lefferts neighbors are counting on our good reputation among deliverers!


Posted by Clarkson FlatBed at 9:55 PM

Thanks for the recap, Tim. This is really wonderful news.

I Q,
My husband Nicolas was also there last night and thought the group was impressive. He has very high hopes, for this group.

I heard from someone that they don’t want chain stores. Does that mean they will not encourage the opening of a Trader Joe’s? I understand that they will send out a survey requesting community input on type of businesses that the neighborhood would like to see. When will they send out the survey, and will it be done via internet or leg work?

Cool,I am also very interested in filling out this survey, please keep us posted when and where we can do this.
Thanks

The comment of not wanting a starbucks was surprising. you would think that a starbucks would generate foot traffic for the benefit of all.

I think the comments about box stores and Starbucks are coming from the perspective of small business owners who would prefer the neighborhood remain healthy for Mom and Pop shops. Look, if Starbucks wants to put up a shop, they put up a shop. They do their marketing and they come on in. So don't boo hoo about them, they'll be just fine. I wouldn't be surprised to see one on the Flabenue in the next couple years.

Trader Joe's is a different kettle of fish altogether. It's basically a curated discount food store. The low prices make it desirable to a lot of different sorts of folks, so if the space could be found I doubt there'd be a lot of belly aching. (I still think there must be an evil underbelly there, speaking of bellies...how DO they keep their prices that low?)

Rhetoric about chain stores aside, I think it's healthy to encourage smaller enterprises to set up shop here - it's good for character and morale. Like I say, the chains will come, if and when THEY'RE ready. It won't be because we begged 'em to come or stay away.

Speaking of chains, the name of the cute new bakery on Church Ave? Nine Chains.
Speaking of this meeting, sounds like it's fair to announce: The Parkside Empire Strikes Back!

Chain stores, how about not wanting anymore hair salon/beauty shops/hair supply shops. Every third store is a some kind of hair related operation and I can barely get a decent meal up here.

Looking at the Church Avenue BID site, I wonder about why is it that they stop at Flatbush Avenue, starting at Coney Island Avenue. There are parts of Church Avenue that are in Flatbush: Bedford, Rogers and Nostrand Avenues. And as for serving as BID for both districts, I wonder about the old saying "serving two masters," ie. will one group get more attention than the other? I searched for the Flatbush BID website, and unless there is something I'm missing, it didn't seem as together as the one for the Church Avenue group?

Jack Katz, the longtime head of Flatbush BID, didn't own a computer. There was nearly no online presence, but the effects of the BID - less trash, more cohesion - are clear to anyone who shops there.

Look for Flatbush to enter the 21st Century. I think it's great to think of the "area" as one, and I think Lauren can make great progress providing she gains the trust of the longtime merchants. I'm very hopeful

Hi, thanks for your reply. But do you think that Church Avenue BID will include the stretch I was imagining, ie., to Nostrand or even New York Avenue? They are still in Flatbush.

Here is the thing, even if you go by the Brooklyn Community District map, district 14's swath of Flatbush goes from Coney Island Avenue to Bedford Avenue.