Thoughts From a Mtg 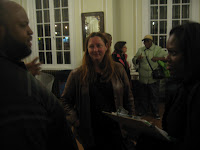 Yeah, I was there. It was a real nice room too. You know that really old and "important" looking building behind the old Dutch Reformed Church on Flatbush at, uh, what's that's street's name...Church? There's a community room there that's just PERFECT for a community meeting. Coincidence? I think not.

It happened last week, the community meeting, so I kinda blew through deadline on this one, but you know I'm both the writer AND the editor around here so I can cut myself some slack. Anyhoo, what went down last week at the combined Woodruff Ave Block Association and East 21st Street Block Association meeting was this: a bunch of cops from the 70th were there, a dozen or so community residents were there, Assemblywoman Rhoda Jacobs was there with Ed Powell (who works for Rhoda's office AND chairs the 70th Precinct Community Council, and founded Umma and led the effort to build Umma Park, interview w/Ditmas Blog here) and the whole proceedings were led by a real cool character named Walter whose last name I forgot and I wrote it down too but lost the piece of paper (due to poor journalistic practices like writing meeting notes on receipts from the food coop, which when I find them in my pockets I always immediately toss and berate myself for keeping such insignificant pieces of paper in jacket pockets when in 15 years of membership I've yet to return anything to the food coop cause it's too much of a pain). So a bunch of people were there, and when I walked in (late) I was ushered over to a seat at the table where a longtime resident and friend of the Q's was giving a full-throttle description of the gang and drug activity taking place in broad daylight along Woodruff near Flatbush and the cops said they'd take a look, though it seemed pretty clear to me they wouldn't, even though they had basically been given all the information they needed to go out and start cleaning things up. Frankly, I think the scene over there deserves some kind of narcotics operation, but I'm feeling kind of tired of the whole alerting the cops thing and I want someone to just take care of the problem rather than citizens having to get up in people's faces and try to force stuff happen. Know what I mean? Like...there they are! Drug dealers, gang bangers, a couple of delis getting paid off to let the shit go down, numbers running and plenty of public intox and I guess that's all just hunky dory and I should shut my big white trap and mind my own business as one guy said to me in one of the delis last summer after a shooting. Or as the cops from the 70th have have said to me and to others when asked what we can do about this problem or that...and I quote..."move." Honest to God y'all when you ask a cop around here what can be done, they'll tell you it's your fault for moving into the wrong neighborhood. The Q wrote to the 70th community affairs guy and said that's not acceptable and I have yet to hear back.

Walter and Rhoda and Ed are awesome and I love that we have people like them still at it after all these years, but they were quick to offer my least favorite response - you know the one about how "it's so much better than it was." I mean, doctors are much better than they were in the Victorian age too, but that doesn't mean there's not still VAST room for improvement. Someone said to me once "Q, what problem do you have with people hanging out on the street anyway?" to which I say I don't have ANY problem with people hanging out. I have a problem with thugs, drugs and guns...and as even Walter put it at the meeting, and HE'S been around the block a time or two...it's obvious as all hell when people are up to no good, and THAT's the kind of hanging out that nobody should tolerate, but we do, because we're all too scared to do anything about it, except the folks at the meeting who are all pretty much on the same page, and frankly the cops are not leading on the issue, they're following, or causing more problems by randomly shaking people down rather than posting a beat cop or two where the problems are and keeping an eye out for patterns of criminal activity. There's a mini-drug-hotel happening on the south side of Woodruff, with no landlord or super in sight, the building's in receivership (whatever that means) and one would think the cops would want to show up every now and then and let folks know the the drug action is unwanted at the very least. This would actually ENHANCE their relationship with the community, most of whom ask only that the cops do their best to try to tell the difference between the good guys and the bad, but for all the talk of cultural sensitivity training most of these cops are (no offense) more Staten Island than Caribbean Island and they seem to see the community like it's a wild animal park to be tamed and tolerated, not engaged. Isn't that the whole idea behind community policing, to get out there and get to know us? Even the beat cops you DO see are texting all the time and not paying attention. Seriously, how many times have you walked by a cop and he's busy with a cell phone, smiling to himself about something he's just read? There, I'm done ranting and now I can go back to trying to be constructive and polite. But really, the texting cops need a talking to, and it better come from another cop, preferably of higher rank, and not me, because I have a feeling I'll just get arrested myself for noting the issue directly. Maybe I'll just text it to them.

Walter and Evria (she's the new Woodruff Block Ass pres, Walter's E.21) are holding meetings regularly, first Wednesdays of the month, and I'll let you know when they happen. Because these are the sorts of places where the real work of community improvement can get done, or at the very least, the real needs of the immediate area can get communicated to the cops or elected officials. The Q will keep you posted on an upcoming meeting the the D.A. Charlie Hynes...now THAT will be something worth attending, and I hope to see a big crowd!

Posted by Clarkson FlatBed at 8:16 AM