The meeting is now scheduled for Wednesday January 29. Thanks again to Developer Seth Brown for taking time to meet with neighbors. 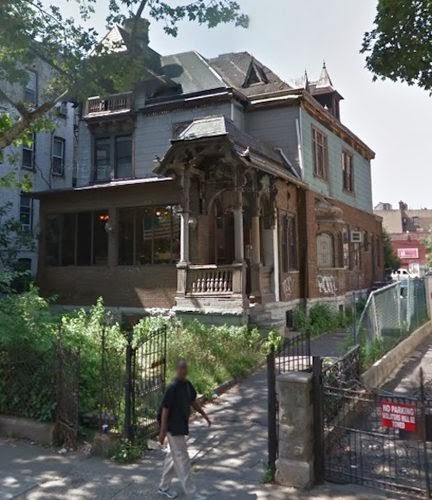 Those of you who are mourning the soon to be razed Haunted House of Clarkson, a/k/a the AIA's fave example of Berserk Eclectic Architectural Movement of 111 Clarkson, will be interested to hear what developer Seth Brown has to say about his planned 50 unit building with luxury amenities, an earth-friendly building to boot.

We are sitting down with the developer of 111 Clarkson Avenue, Seth Brown, to discuss our concerns and wishes for the upcoming project.

Please join us. We need a strong, but courteous and friendly, community presence at this meeting.

Please pass it on thanks!

To some, this may seem like an overdue use of a parking lot and dilapidated-beyond-repair mansion. To some, it may seem like the loss of a neighborhood icon. And to some, it's simply not wise to tear down a haunted house, thereby releasing the spirits and creating an antagonistic relationship with the angry gods who oversee the ORIGINAL purpose of the site, which was as a Native American burial ground. Add to that the fact that the site is also the peak of a legendary volcano system and the intersection of three major fault lines, not to mention the site of numerous Sasquatch sightings over the years...there's bound to be trouble.

But hey, it's steps to park and 25 minutes to midtown, so basically six of one half dozen of another.
Posted by Clarkson FlatBed at 2:10 PM

thx bob! so much for cut and paste. one would think a seasoned journalist like myself would at least read his posts.

I finally saw in person this house the other day and it looks much better in photos than it does in real life. I can't imagine it being saved. It's so far gone. The community has to step in more actively and strongly much earlier on if they hope to save historic homes. You can't scramble to do it only after somebody buys the property. Like did anybody on the first block of Maple try to convince the owners of 50 Maple not to let it rot? If I lived next door to that house I would have been calling 311 every day. And 911 each time I spotted the various homeless men who used to hang in the yard or house drinking. Its windows are now covered in wood boards. It is protected so it won't turn into a condo but if nobody wants to invest a ton of money into a gun renovation the house will sit there forever with nobody in it and continuing to decay. Why does NYC allow this in the first place? Other places they'll seize the house. There's no enforcement of anything here. Sad.

Anon I think you missed the point of the meeting. It's too discuss the development, not to fight to keep the building standing.

Just curious: how far away do you live that you couldn't have called 311 yourself? Rather than pointing fingers, perhaps using them to press the three digits would have been more helpful.

Many people worked to get 50 Maple taken care of. Don't assume that you're the first person in the community to care.

Only a close-by neighbor sees enough specifics of the condition and activities at the house to call 311 enough times to be effective and with many details to provide like incidents of people breaking into the house or hanging in the yard. If they don't want to make a project of it is really difficult to get anything done about it with the city. I mean, we know that, right? Look at what has had to be done about illegal dumping. It didn't take merely a few 311 calls.

Wait. 50 Maple? Tell me about it, I don't know the story. Thought you were referring to a different house. Still, if you had such detailed info I'd hope you'd take the initiative.

The most you can hope for is violations aplenty. The City doesn't have a lot of recourse to take a house away from a private owner, though efforts are underway to create more power to take over neglected properties. Not sure if that would count in terms of single-family homes though.

This sounds like a job for Bob Marvin and/or Babs!

Is that the one that had hundreds of thousands in liens? If so, I suspect the hardest thing is getting someone to take it.

In this environment though, you'd think someone would snap it up if it were for sale.

The vagrant situation is a 911 call.

They've had a couple of open houses, and let me tell you that the use of the word "untouched" in the description is...beyond words. Without going into vulgar detail, the sellers would have done well to remove the squatters' "biological evidence" before listing it for $1.2m.

I'm a fan of protecting a house's historic character, inside and out, but that one needs to be gutted. I just hope they drop the price far enough to entice some ambitious/crazy/long-sighted person.

Neighborhood scuttlebut is that it was owned by a model who never moved in. Some online sleuthing seems to back that up.

Oops! Walked by this evening and realized that I was referring to 51 Maple, not 50 Maple. The original poster was, as well, given that he referred to the boarded up windows.

When a house is abandoned and falling apart and getting boarded up, the community needs to take action and get the owners fined, stay on it over and over and simply make it unaffordable for the owners to abandon but insist on hanging onto the house while refusing to maintain it. Which is such a hostile thing for them to do to their neighbors and neighborhood. This is exactly how the house on Clarkson became what it is now. And the infamous house on Bedford Ave.

Both 50 and 51 Maple are abandoned houses. Confusing. And I added to confusion, sorry. 51 Maple is the one that hasn't been maintained in any way whatsoever, has had the squatters and garbage and now has windows all boarded up. 50 Maple has somebody doing groundskeeping at least, though if they don't fix some of the windows and exterior they'll get water and vermin in the house and it goes downhill fast after that.

I'm pretty sure that 50 Maple isn't abandoned. I've met the people who live there, if briefly, and they seem quite nice. Maintenance on a big place like that can get overwhelming, and that might be the case here. I don't envy them repairs to a slate roof.

51 Maple is (on the other hand/other side of the street) quite obviously abandoned. I wish they'd drop the price so someone would move in. Abandoned buildings are such bad news...