People have been asking me lately whether a call to 311 is really good for anything. When everything else fails, it surely can't hurt. But I'm going to throw this here case study out to y'all, and we can track the effectiveness together. This morning, I called in complaints to two of my trash nemeses...673-675 Flatbush (The Original Struggs) and the back alley of 225 Parkside (which you can see through a fence at 700 Flatbush. The man on the other end was pleasant, informative, patient. He explained how the gig works...basically, the complaint goes in, I get a confirmation number, they go and investigate, and a summons is written if what I say is true. Here's the confirmation on those two claims: 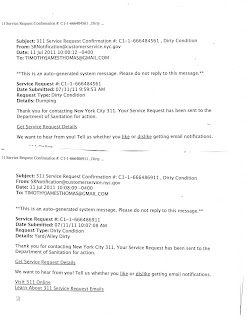 Of course, they could write them up and nothing happens. Or, perhaps if I'm lucky, those two spots will get cleaned up, even briefly, for the first time in months. I'll let you know how it goes.

On the subject of alleys, there's one behind my house. Actually two...one big enough for cars (it once was a functioning alley with parking for, I don't know, Packards and Edsels and later AMC Pacers) running east/west behind the huge apartment complex on Parkside. And there's a thin alley next to my neighbors house, running north/south, along the rental units of 35 Clarkson. Over the years we've seen all manner of garbage get tossed out of windows...and let's admit it, this is just plain craaaazy, because we live in a town where all you gotta do is get it to your super, who takes it to the street, where well-compensated City employees lug it and take care of disposing it for you. So for the nutjobs using their windows as trash compactors, I'm suspecting mental illness, booze, drugs or all three. Not that those always lead inevitably to sacks of leftovers tossed from fifth-story apartment windows (I for one never did those things whilst under the sway of that sweet trio), Still, I gotta say it took me by surprise the first time I saw someone stick their garbage pail out a window upside down and shake. Come to think of it, that's not the only thing I've seen stuck out a window and shaken. Not long after we moved here, I caught a guy regularly peeing out his window, for all to see and hear. The guy in the flat below was particularly bummed. One day, I'd had enough. I heard the familiar trickle, stuck my head out my back door and screamed "you stick that thing out your window one more time I'm gonna shoot it off with my shotgun!" Now, I don't own a firearm, and there's an argument to be made that threatening a stranger's manhood thusly could backfire tragically. Luckily, my lunatic scream proved convincing, and I never heard or saw the guy or his schlong again.

Which brings me to this question, to be answered soon, I hope. What the heck do you do with a slumlord? Got a real bad one just down the block, who's cheating the City AND his tenants at the same time. Stay tuned for more on 60 friggin' Clarkson...
Posted by Clarkson FlatBed at 10:21 PM

Residents of the building need to organize to demand their landlord respect the law. PLGNA's Housing Committe can help. If the residents don't do anything very little can happen. www.PLGNA.org