When I stopped in at Community Board 9 headquarters the other day, I noticed this pretty frickin' fantastic flyer from the Department of Sanitation. It's even in colour!! 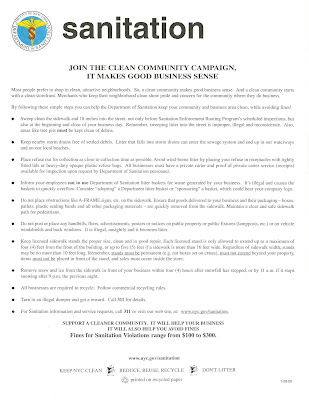 We should drop one of these on every biz on Flatbush, Parkside, Rogers, Nostrand...you name it. Now, most business owners probably already know this stuff. But some may not. It's basically the owner or merchant's responsibility to clean all the way out to 18 inches past the curb...and bullet point one notes, IN BOLD NO LESS, that tree pits must be kept totally clean. Nothing gets my goat more than seeing a struggling tree crowded out by dumped crap.

While I'm thinking of it, I should relate that a vote took place at last month's CB meeting in support of placing a limited number of speed cameras to catch speeders - not just in our neighborhood mind you - to get people to obey the speed limit. Did you know that the speed limit CITYWIDE is 30 mph? As far as I can tell, that makes most NYC drivers outlaws. Transportation Alternatives wanted to solicit our endorsement as they make their case for cams to the City. To be clear, a ticket via these license-plate snatching vids costs dough, but not points on your license. That's because it's hard to know for certain WHO was actually driving. The City figures, though, that if you lent your car to someone, you'll be motivated to collect from them if you get a fine.

There were a few voices expressing dismay that the City seems hell-bent on thwarting drivers. One board member went as far as to accuse the Mayor of wanting us to go back to the time of horse and buggy.

I'm going on the record as fully against the idea of "going back to horse and buggy." I mean, if we can't keep a few Popeye's containers off the streets, how are we going to handle the cartloads of horse patties?
Posted by Clarkson FlatBed at 2:41 PM

What kind of cameras are they talking about that don't show exactly who is driving? Must be very low tech ones. Because the ones on the intersections in Los Angeles absolutely show who is driving and very clearly. There is a camera mounted on all the corners of an intersection and at least two of the cameras are pointed and zoomed directly into the car at the driver. My friend got one of these tickets and it made a very clear portrait of her as she ran the red light. And this was ten years ago. NYC is way way behind other big cities in the country in this regard.