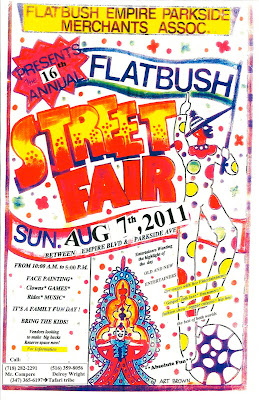 I attended the informal gathering on Wednesday night of the latest attempt to revive FEPMA, which used to be FECMA (there are still FECMA signs up on lamposts along the 'Bush). Whole volumes have been written about the change from Flatbush Empire to Clarkson Merchants Association to Flatbush Empire to Parkside Merchants Association. Some scholars believe that Voltan Bagot, the mad wizard of Globe Electronics, is a key reason why FEC became FEP. He threw his hat in with The Flatbush Avenue Business Improvement District (BID) that heads south from Parkside, and I'm sure the rest of the block followed. And I'm telling you right here and now that the BID has led to a much cleaner, less chaotic feel, what with daily trash patrols, better lighting and the infamous Christmas ornaments and music. Enough insider talk...onto the meat of my missive.

At 7:20 PM, Wilfrid Compere (of Compere & Compere accountants) beckoned me to sit down on a lovely and comfy imported couch at Tafari Tribe, one of the grooviest stores on the Avenue (more on that in another post). Mr. Compere used to be president of FECMA, but he seems to now be more of an honorary, having ceded his title to Delroy Wright of Source Health Food store. Delroy led the meeting of about 10 or so, as they tried to dust themselves off from previous misbegotten efforts and start afresh. Apparently, having a street fair is a great way to encourage participation among merchants. This is akin to having a block party to kick off a block association (of residents.) [Having just gone through that process, I'd be happy to help you create a block association and get your block party going. If you live in CB9, all the easier, cuz I'm now on the Board God help us all. I'd love to share my experience with you, so don't hesitate to email me.]

Bottom line is - without a coherent merchant's group, change will come slow to the 'bush. And while it's hard to imagine all those salons and tax places and delis and liquor stores and take-out places coming together as one...stranger things have happened. To hear Mr. Compere tell it, the real buy-in takes place at the level of landlord/owners. They're the ones who can turn a merchant's group into a BID, a city-recognized org that volunteers for a slight increase in taxes to pay for a proper staff and things like hired street sweepers. The tax increases eventually make their way to store owners in slightly higher rents, but this is usually offset by greater sales and a better quality of life all around.

In other words, it's up to the merchants and "owners" to decide what kind of commercial neighborhood we're gonna have. It's not just a City thang, though the government can surely help. Power to the people, if they want it.
Posted by Clarkson FlatBed at 9:37 AM

Is there anything the community can do to help create a BID? In places where I have seen them, it is so much more pleasant to walk around and shop because of the cleaner streets and could be a great step forward for our neighborhood!

Also, any more updates from the crime meeting last week? Any productive come out of it?

As mentioned, a BID costs money, and a majority of landlords must sign on. Once this happens ALL owners must contribute to it (although they can pass these costs along to tenants). As a result they are quite controversial - Seventh Ave in Park Slope has never been able to get one through, even though a good number of merchants on the strip voluntarily contribute to a Merchants' Association, which pays for cleaners from the Doe Fund, among other things. There is also the contention that BIDs raise rent and force out long-term businesses; witness the long-contested and still-opposed (by some) Fulton St BID in Fort Greene/Clinton Hill. My take on it is that even if rents do increase, the positive developments that come with a BziD will lead to increased business for all, making rent increases less of an issue.

We had a beloved old curmudgeon in the Caton Park Block Assn. who used to rant about the Church Avenue BID: "Thanks to them, we always have a goddam banner up to tell us what season it is! What would we do without them?" The Church Ave. BID has, of course, done more than just festoon the avenue with seasonal banners. They, too, have the Doe Fund and I think we're going for new lightposts now. Something else will surely occur to me.