Growing up in Ames, IA, Block Party Weekend meant three cuts in a row from the likes of Led Zep and Genesis. The tag line for the local classic rock radio station was: "KGGO...rockin' de Galaxy. From Des Moines, to de Moon." Brooklyn Block Parties are another thing entirely. They've been happening all summer long throughout our neighborhood, so I'm late in posting. I'll focus on Saturday's events in the ol' PLG, but as I rode my bike through the borough yesterday there were plenty more happening throughout. By the way, if your block doesn't have one, you can always be the guy/gal who gets it rolling for next year. Just go to the Street Activity Permit Office website and follow directions. You'll need probably six months to prepare.

Hawthorne Street always runs a classy affair. Yesterday, at its intersection with Flatbush, Carrie and Monk's Trunk had set up a bazaar benefiting the Playground Committee of the Prospect Park Alliance. The other big highlight was the trademark Hawthorne I puppet show - courtesy of ABC Arts. If you have trouble picturing the scene, I have this little thingy to help you visualize:

Over on Maple 2 (see, people in the Manor prefer to refer to themselves thus, the numeral referring to distance from Flatbush) a markedly more mature block party took place, in the sense that it seems older and more refined (good thing in a block party?), and they pulled off the mean feat of both Dog Beauty Contest AND Classic Rock Cover Band - the latter being provided by local Dad-band Bangstrum, the former by kids and their equally adorable mutts. It looked kinda like this: 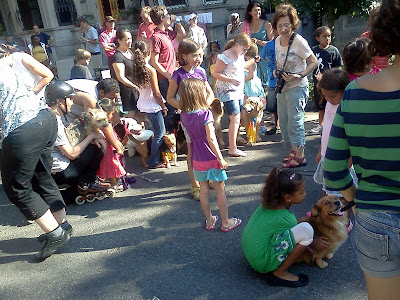 Next week, we over on Clarkson of the bus route and two precincts and massive rowdy apartment buildings, hold a block party too. Who knows what will happen - we're miserably ill-prepared. But between the stoop sales, talent show, DJ, grills and popcorn machines, there are enough ingredients that a marvelous urban souflee might emerge. So why not stop by next Saturday?
Posted by Clarkson FlatBed at 5:03 PM

Block party on Clarkson? I won't dare miss the fun :) I must say, these block parties have been an awesome way to meet the people I so often just pass by on the street.

It's going to be awesome, Tim. I mean not quite like balloon arch in Park Slope awesome but awesome.


I should really, really participate in the tag sale. We have so much stuff.

Less doooooo it!!! Lets turn the whole street into a Flea Market! I'm haulin my wares out starting at 9 am... everything from Bedroom furniture to splintered wooden spoons... hey ya nevah know!