Go To the Precinct Council Meeting on Thursday...and consider this

Thursday. Be there at 7:30, the 71st Precinct Council Meeting. It's held every month, and the SWFlatbush/PLG/Lefferts/Parkside turnout is typically too low. This is a chance to see why it's so important to engage with cops.

I spent some time yesterday with Officer Vincent Martinos of Community Affairs. He's approachable, though very busy. Call him at (718) 735-0527, but I suggest meeting him first at the CC meeting so he can put name to voice. He'll be there on Thursday. He's coming up on 20 years in the cops; he's a union leader and knows what's up with the rank and file. You may not agree with him on everything, but I feel comfortable that he's honest, hard-working and genuinely interested in the safety of our neighborhood. But one thing stands out to me from all the clutter: we're down to nearly half the cops from the height of the buildup in the late '90s. So if you're feeling a lighter presence, it's not just a mirage. And privately, some officers are saying its only a matter of time before that massive cutback shows up in the "numbers."

Task forces, TBOC (Take Back Your Community), Public Safety committee of the CB, PLGNA...all ways to engage issues of violence, drugs, crime; it's always important to act as one against the knuckleheads. I mean, we outnumber them like 99 to 1! But lest you get discouraged about that "1," consider what one group has done over in the 77th, the NE part of Crown Heights. Save Our Streets is an amazing organization that doesn't just talk about ending gun violence. Modeled on a program in Chicago, these gals and guys get deep into the issues causing the problem, and they're not afraid to put people right in the middle of brewing conflicts. Because it's rare that a shooting happens on a whim; disputes and despair usually come first, but sadly no one goes to the cops til after the trigger gets pulled. Please check out the SOS Crown Heights website and spend some time there. You may run across this drawing there, and if it doesn't touch you somewhere deep, well, I just don't know what to say.* Peace, literally. 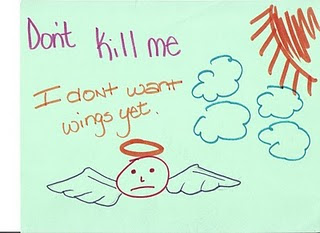 *unless this was drawn by a 30-something graphic designer working out of DUMBO. In which case, I want your address and phone number because I'm going to crank deliver you bad Thai Food for the next three weeks. You should be ashamed of yourself.
Posted by Clarkson FlatBed at 10:34 AM