There's a lot to like about "Woodruff I"* resident Duane Joseph. A big guy with a warm countenance, Duane came up to Brooklyn when he was in middle school, from his home country of Antigua and Barbuda. 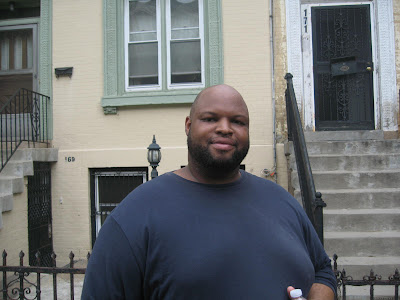 The island nation may be known for its emerald beaches,but guess what? The tiny country of 85,000 permanent residents, mostly living in the urban capital St. John's, has its own version of Rio's "City of God." and so Duane's folks sent him up to Flatbush for a better shot at a decent life. Living with relatives, for awhile over on Rogers, then on Woodruff, Duane got to know the rough and tumble world of Caledonian Flatbush in the 1990's. He considers himself lucky to have gone to MLK High School on the Upper West Side. His daily journey to and from, plus the good atmosphere at MLK, gave him a bit of insulation from the knuckleheads. He jokes that Crooke Avenue really lived up to its name back in the day, and UMMA Park at Woodruff/Ocean was a real lively scene at night before they put in the playground and gates.

Duane's been involved in efforts to improve the quality of life around him. He cites prodding from Andrew "Mac" McConnell who lives around the corner in the awesomely named Prospect Park East building. Mac's been involved with volunteering for years (he was recently helping us push the Councilman and DOT for traffic calming for Flatbush/Ocean - hey Maddie, what's up with that?). Mac, seeing that Duane had a head on his shoulders, suggested he get involved in local improvement efforts. And he's now very involved with Rudy on Winthrop and his Parkside Prize to re-envision Parkside Avenue.

Duane had some interesting points about the block that I'm following up on (like the extraordinary reality behind the mysterious clan who lives communally at 162 Woodruff...I'm barely containing my excitement to tell you about that one - soon). The street action on Woodruff is pretty wild these days; but Duane's seen a lot in his two decades on the block, so he takes it in stride. One tidbit: apparently the little junk store in the first floor of the building at the NW corner of Ocean/Woodruff? He says it's one of what once were many year-round MAS camp storefronts, where locals spent the entire annum getting ready for Brooklyn's Labor Day J'Ouvert. Steel Drum bands made so much noise back then that Duane led an effort to get them to move off his block. The Trinidadian specialty is delightful to be sure, except at 4AM or when sustained for days on end. I believe Rudy on Winthrop can attest to that fact.

By day, Duane's an executive assistant at a major publishing firm. And he's started his own business providing start-up advice to local businesses. Good luck with everything Duane. I'm looking forward to getting to know you better.

*For those not in the know, folks in PLG often refer to their blocks as the street followed by a number, referring to the distance from Flatbush. So Maple 2, for instance, would mean Maple between Bedford and Rogers. Woodruff I is intended to suggest Woodruff between Flatbush and Ocean...ha ha. Ha ha. Joke. Ha. Me Funny Man!
Posted by Clarkson FlatBed at 9:16 PM