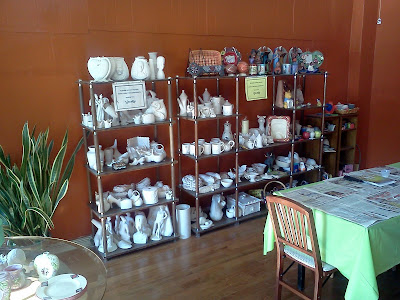 You know, in my 45 years on the planet I can think of no instances where I expressed myself in ceramics. There may have been a thrown pot or two back in my youth, but I'm pretty sure it was just to get an art teacher off my back. You could argue I was expressing something in ceramics then...resignation or annoyance perhaps. Bottom line, I best stick with English, though I have been known to emote on my trusty six-string a time or two.

I'm setting the stage so you can imagine my disorientation this afternoon, sitting in Lindiwe Kamau's wonderful shop on Nostrand at at Rutland, marveling at the expressive clay figurines and shapes made by kids throughout Brooklyn, each groovy piece perched neatly on the shop's shelves. "Expressions in Ceramics" is Kamau's place of business, and you really must visit or at the very least check out her website: EiC.

She works with kids and adults, and its fair to say that this is just the sort of neighborhood shoppe that makes this a very special place to live indeed. Her workshops are fancied by schools and summer camps, and it's clear from her telling that Ms. Kamau is a passionate practicer of the potting arts. But there's more to Lindiwe, as I shall herein relate...

Here's Lindiwe Kamau in her other role, that as community leader as head of the Nostrand Avenue Merchants Association, with her Assemblyman and mine, Karim Camara: 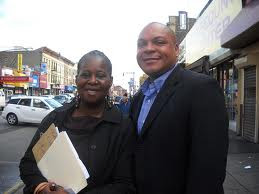 I met her this morning at yet another meetup at Eric's Klubhouse, the State Senators' joint on Flatbush. This was the first time I got full-on excited about the prospect of the neighborhood coming together to make positive quality of life changes, since there was TRUE diversity in the crowd, and I was duly impressed with the seriousness of pretty much everyone in the room. Could a movement be brewing? Senator Adams wants us to take on a project called "Take Back Our Community" to empower just such a mobilization effort. More on that later; but one of the folks at the meeting was Lindiwe, and here's what I learned from my talk with her at her shoppe later on this afternoon.

If you walk down Nostrand, a similarly hectic commercial thoroughfare to Flatbush, you get a very different vibe. It ain't Champs de Elysee, but the wide sidewalks give you room to breathe, and the lack of trash is seriously refreshing. Ma and Pa businesses have at least a modicum of shop-pride about their appearance. I believe you can attribute this is large part to the existence of a healthy Merchants Association, and Lindiwe has helped organize them to near-BID levels (you need 60% participation of shops and landlords for that). She even described a special initiative to create a Rapid Transit bus lane, in from the curb so as not to disturb customer parking. If you're not familiar with the concept of Rapid Transit, or Select Bus Service (there's some in the City, like along 2nd Avenue), it's an innovative way to speed up buses, with amenities like off-site fare payments and Bus Bulbs, which you really must know something about for proper cocktail party conversations at Gatsby-esque gatherings in the Manor, say. Read all about the Nostrand project here: SBS Bus on Nostrand.

So stop in to Expression in Ceramics. Say hi to Lindiwe. Check out her wares. And keep your eyes on Nostrand. As Nostrandamus once famously warned: Don't Cut off Your Nostrand To Spite Your Flatbush.
Posted by Clarkson FlatBed at 5:05 PM