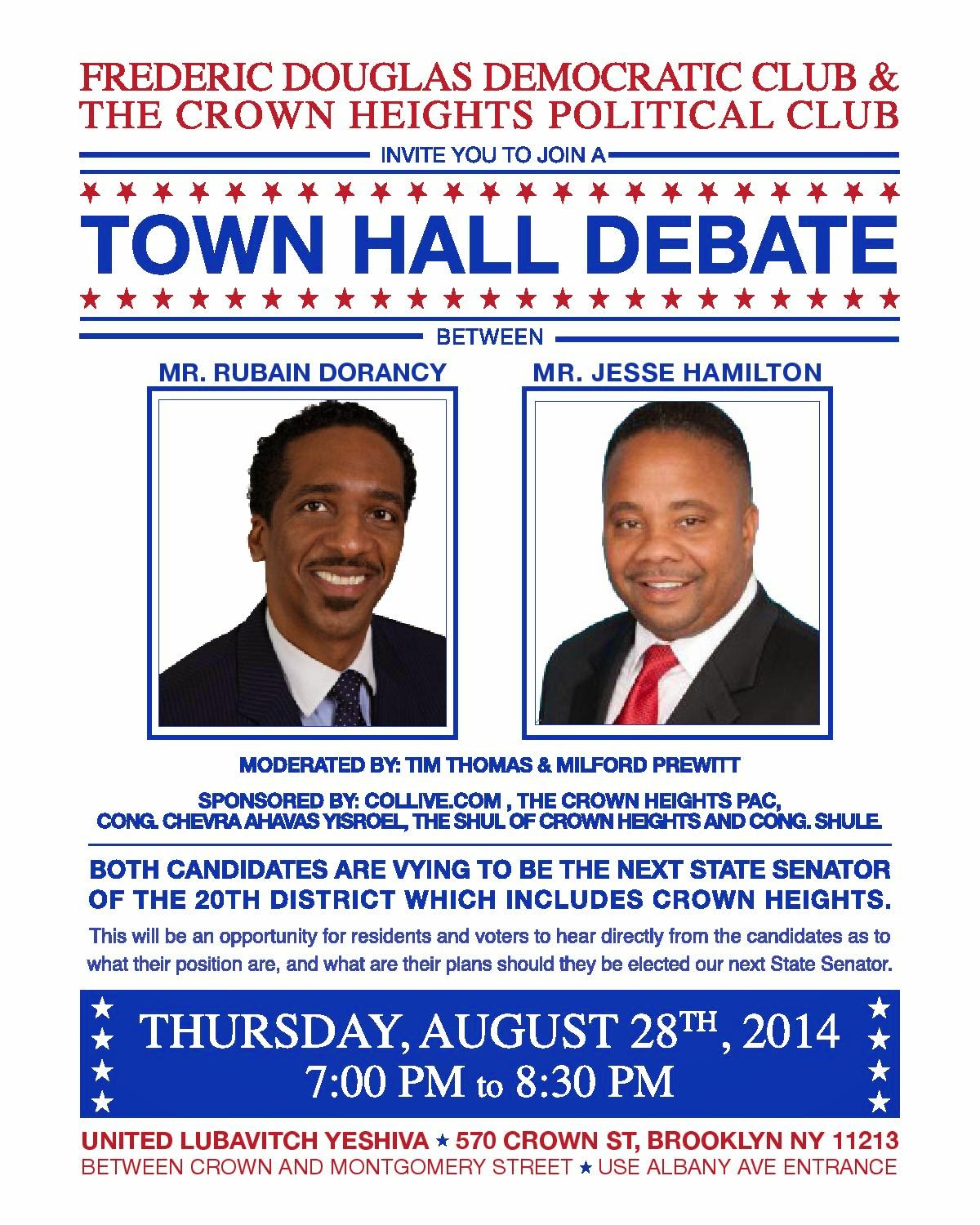 this post is a rerun to alert you to tonight's event.

Hey y'all. For the State Senate debate we had to exchange Demetrius Lawrence (too partisan say some) for Milford Prewitt, long of the Lefferts Manor "Echo," meaning you can count on some actual journalistic expertise along with the Q's rabid gotcha-isms. (That's a joke; Geena Davis, during the shooting of our film "League of Your Own" referred to me as "Softball Thomas." That too is a joke. The only movie star I actually had a conversation with was Ethan Hawke back in 1991, who said "Tim...you and me, we're rebels" over bourbon and beer. I have a feeling I remember that interaction much better than he. That's not a joke, but feels like one. Ask me about the time I hosted an MTV show called "Buzz Bin Report" and got canned after only one broadcast. Probably a record in the world of VJ's. They wanted a "corn-fed Midwesterner" and I aced the screen-test, but under the bright lights I think I was a bit forced. My other brushes with fame? Ask me about Bob Seger (not his dad Pete) and how we "walked into a restaurant, strung out from the road" and both wrote a song about how we "just wanted to explode" and then he stole the song and my best line "is that a woman or a man?" Oh, and the "trusty wood" of "Night Moves?" Mine too, both the wood AND the song. Or how I asked Pete Seeger if he was Bob Seger's dad and why he took that extra "e" away, and that he must've been a terrible father to raise such a thieving kid. Oh, and one time I peed in Natalie Merchant's pool. And I shared a dinner with Wendy of Wendy & Lisa from Prince's band "The Revolution." Now I ask you to guess which of those stories are true. Yes, the Q has many surprise revelations up his sleeve. If one stays alive and keeps leaving the house, more wild and wonderful stuff will happen than one ever could have imagined playing that tennis racket in front of the mirror as a child. "Meet the New Boss...Same As the Old Boss" indeed! Oh, and playing onstage with Bun E. Carlos on drums? Priceless! More will be revealed...and if you get that reference, you know what I'm talkin' about.

Do any of those things qualify me to moderate a debate? No, but like I said, if you stay alive and keep leaving the house, you never know...


Posted by Clarkson FlatBed at 8:58 AM

Or how I asked Pete Seeger if he was Bob Seger's dad and why he took that extra "e" away...

Or how the organizers of this "debate" took away the extra "s" at the end of Frederick Douglass.

In the context of this firing-line event, the name mis-spelling says a lot.

Different Frederick. This one owns a bodega up on Franklin.