What A Difference Four Weeks Make 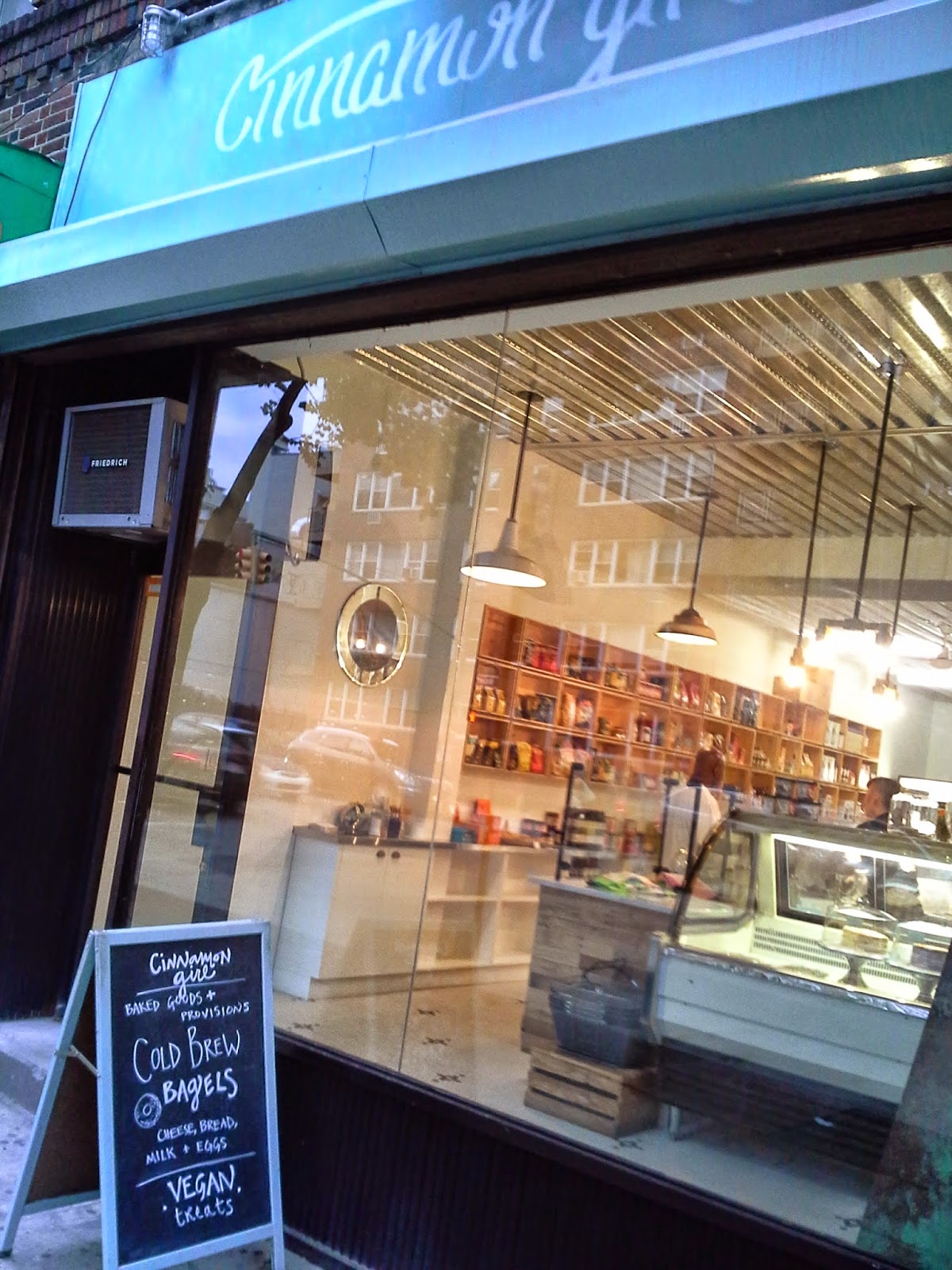 Can't hardly swing a dead cat around here without hitting a new shoppe or commercial enterprise. "Cinnamon Girl" is already up and running in the old Pilar salon at 583 Flatbush. With two other locations in BK, the team that runs these cute upscale coffee/baked-goods/gourmet-products joints really knows their (food)stuff. AND they sell a $1 small coffee! (Take note, competitors. Sometimes, that's all we want. Of course, you can also get a delicious cold brew ice coffee for a few bucks more.) You gotchyer select fresh produce, eggs, even a fancy coconut milk, kool kimchi...there'll be more take-home selections soon. Friendly staff - Brent and the woman with the pretty Asian-sounding name I can't now recall - were both super helpful and pro. (I guess I really should take notes. Journalists do that, right?) How's about a menu: 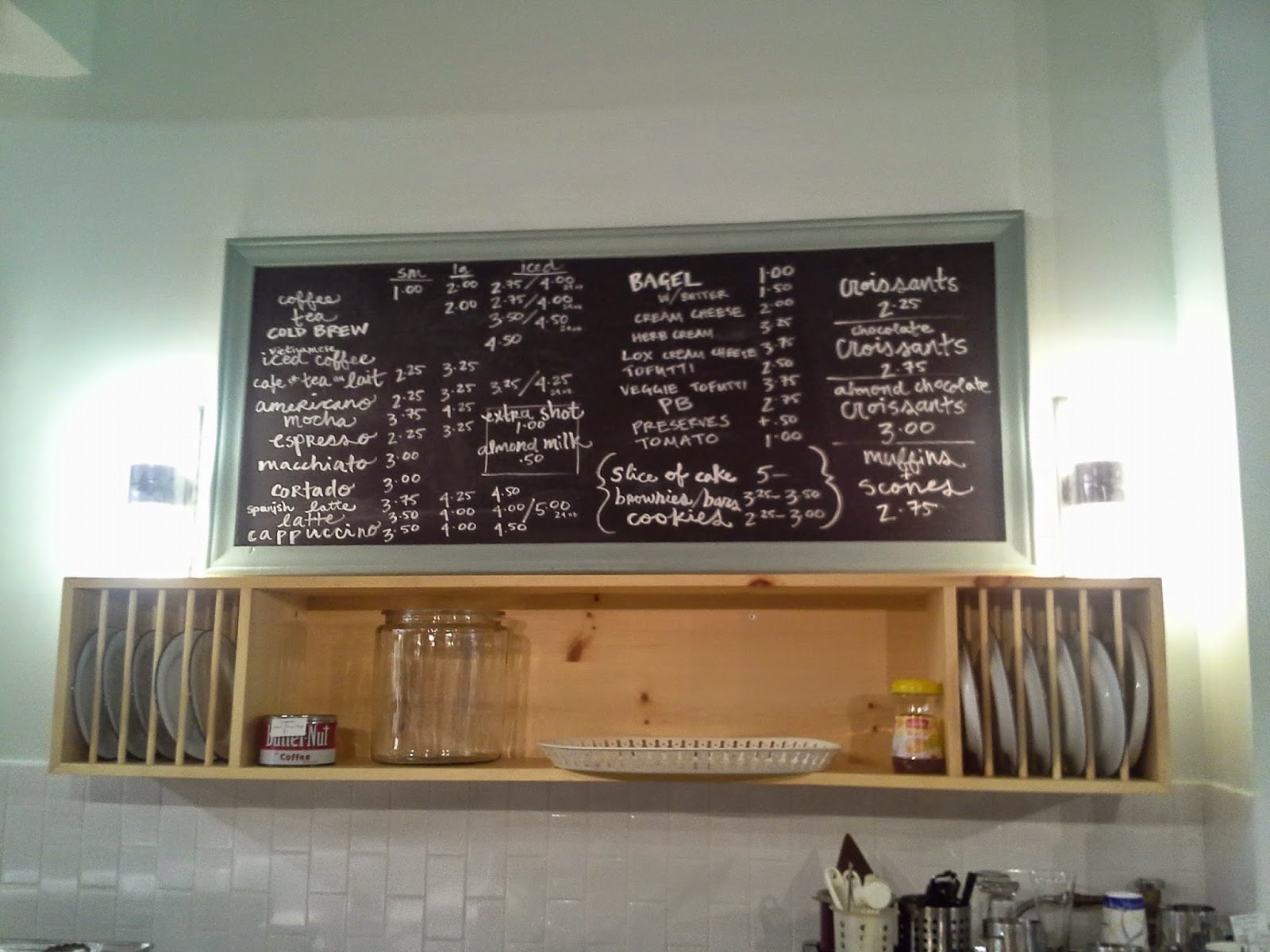 Erv's has opened on Beekman, but you might miss it since it has no sign and is not smack dab on the Flabenue and, uh, I forgot to shoot a picture. From what I hear it's got a good cup of joe and they'll be serving mixed drinks presently. Now, I'm no brilliant capitalist, but it would seem to me that they'd need to take over the whole corner, including the laundry and 99-cent store, and turn it into an evening destination, if they wanted to make more than a coupla bits in profit. As is, I can't imagine the foot traffic would pay the bills. Something tells me they have a game plan.

Oh, and speaking of game plans. I spoke to Eskimo of 65 Fen to see what was up, and it turns out they're moving 65 Fen to, er, 69 Fen? 71? and expanding Delroy's to be a larger wine-bar space. PLG Outpost didn't work out (was their heart really in it?) and Cinnamon Girl is satisfying that long-rumbling hunger pang anyhow, but I'll be danged if a wine-bar couldn't work if done right. The wine store is open, just a couple doors down, so pay 'em a visit and wish 'em well.

Shelley and Carl changed the color and window display at Play Kids to, um, what is that, turquoise? Aqua? Kudos to them for keeping things fresh. Shelley's been busy with the emerging Parkside | Empire merchants group, so I'm guessing it was Carl got out there with the ladder. Just guessing. Gotta be careful on that ladder. I've heard stories that would make your hair spin... 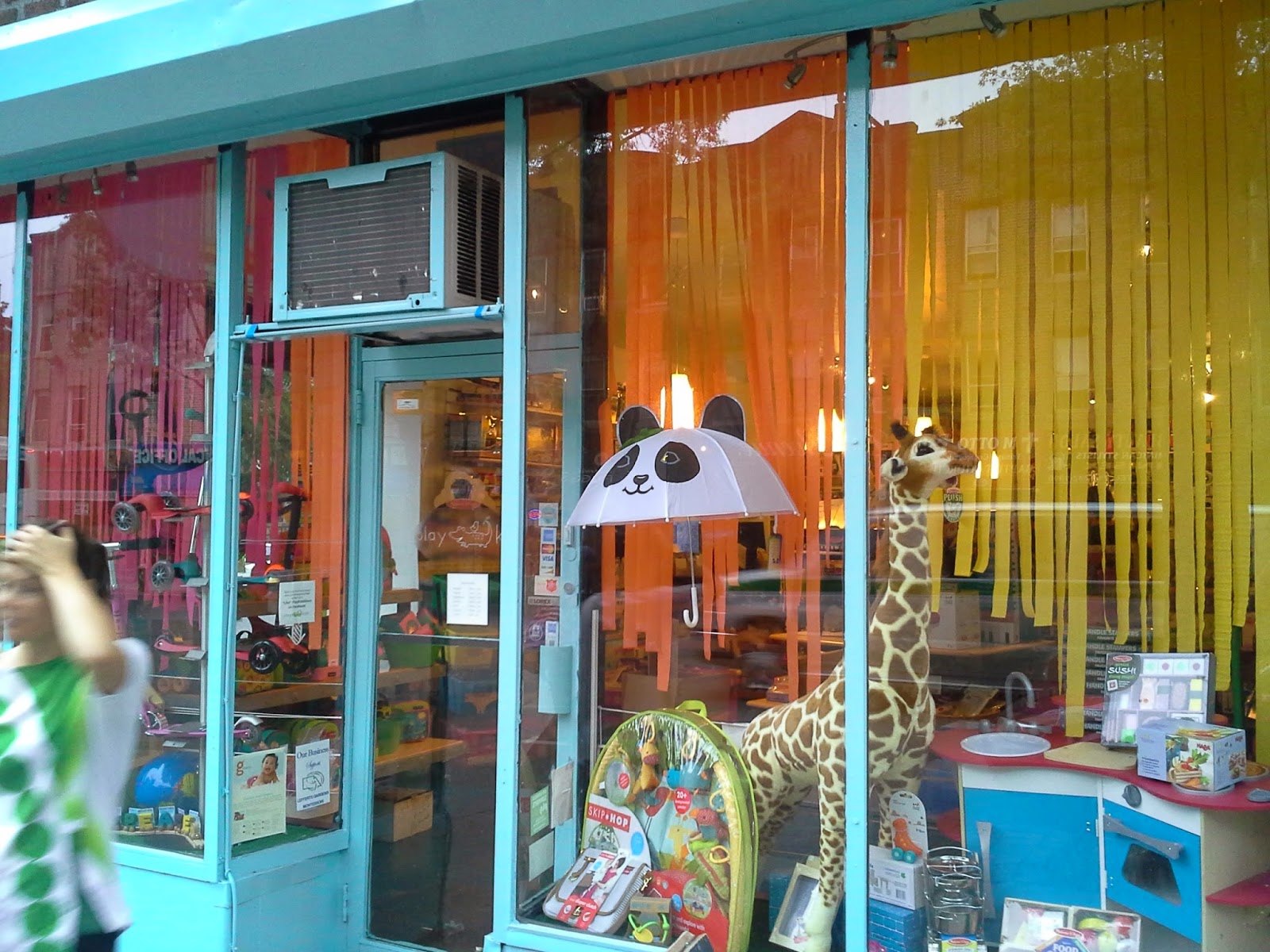 Now, some of you may shrug when you see that there's a new chicken-burger-dog joint just up the road from Shelley and Carl's. "Sultan's" it's called. Used to was these places were more plentiful than parking meters in Brooklyn, but they're still holding their own, like that one with the spitting problem on Parkside. (The one on Bedford near Clarkson closed recently). They used to all be called "Kennedy Fried Chicken" (get it? KFC?) and trace their roots to the first Afghan proprietor in the 1970's who took the idea behind the African-American-owned "Kansas Fried Chicken" and ran with it to ultimately include everything he could sell in buckets and bags from a bullet-proofed glass counter. The first time I ate at one back in '88 my friend told me we were going to the "ghetto chicken" place and I had no reason to argue - he was BORN here after all. What did I know about where chickens lived? I thought he meant the chickens were living in the ghetto, and he laughed. How prescient though. Turns out, after learning as we have about the conditions at factory farms, that the term was damn near accurate. Chickens really DO live and die in ghettos. Read about the Afghan Chicken dynasty here. Only on Main Street NYC my friends... 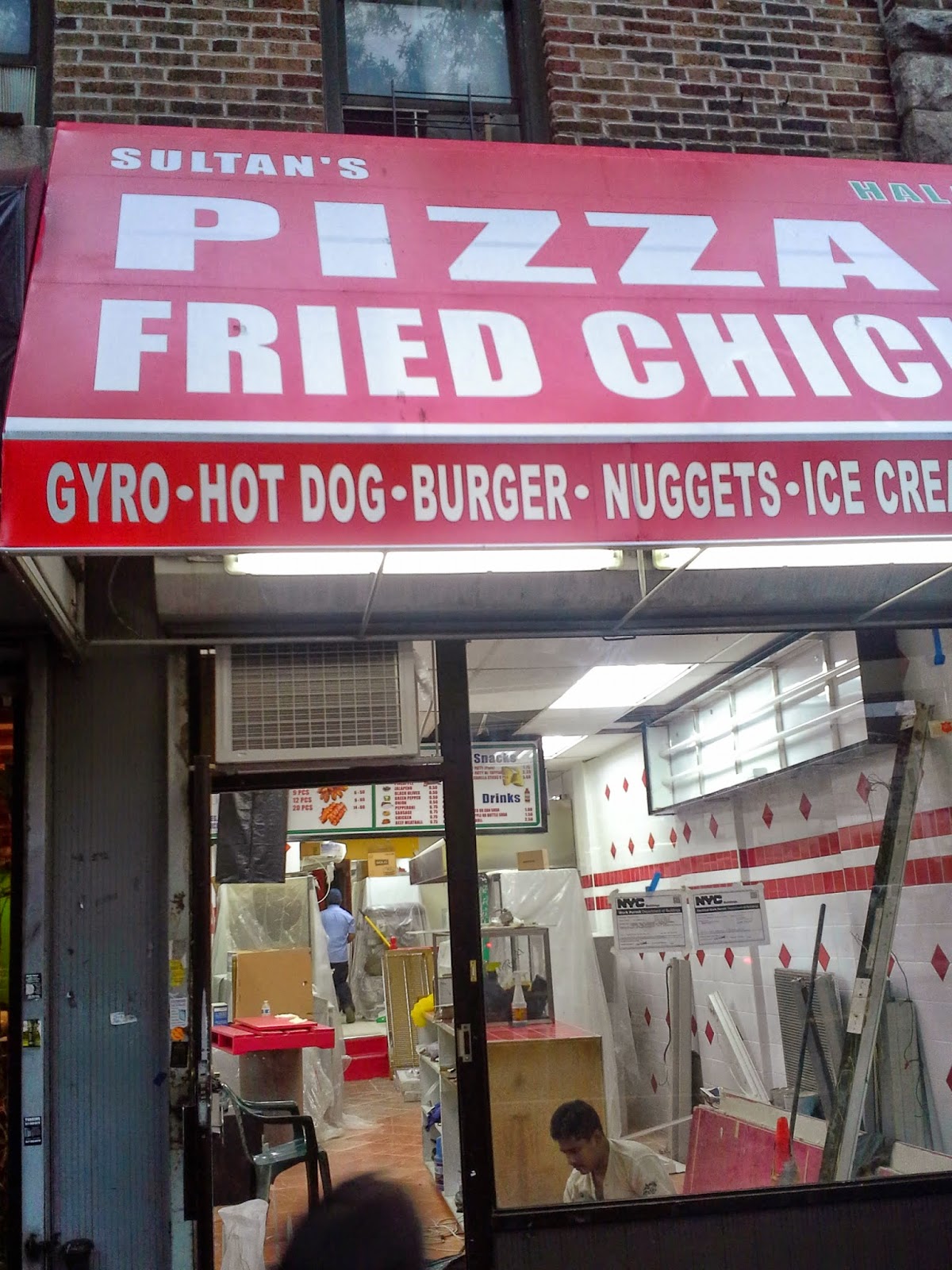 Things are moving along at the Gastro Pub, too: 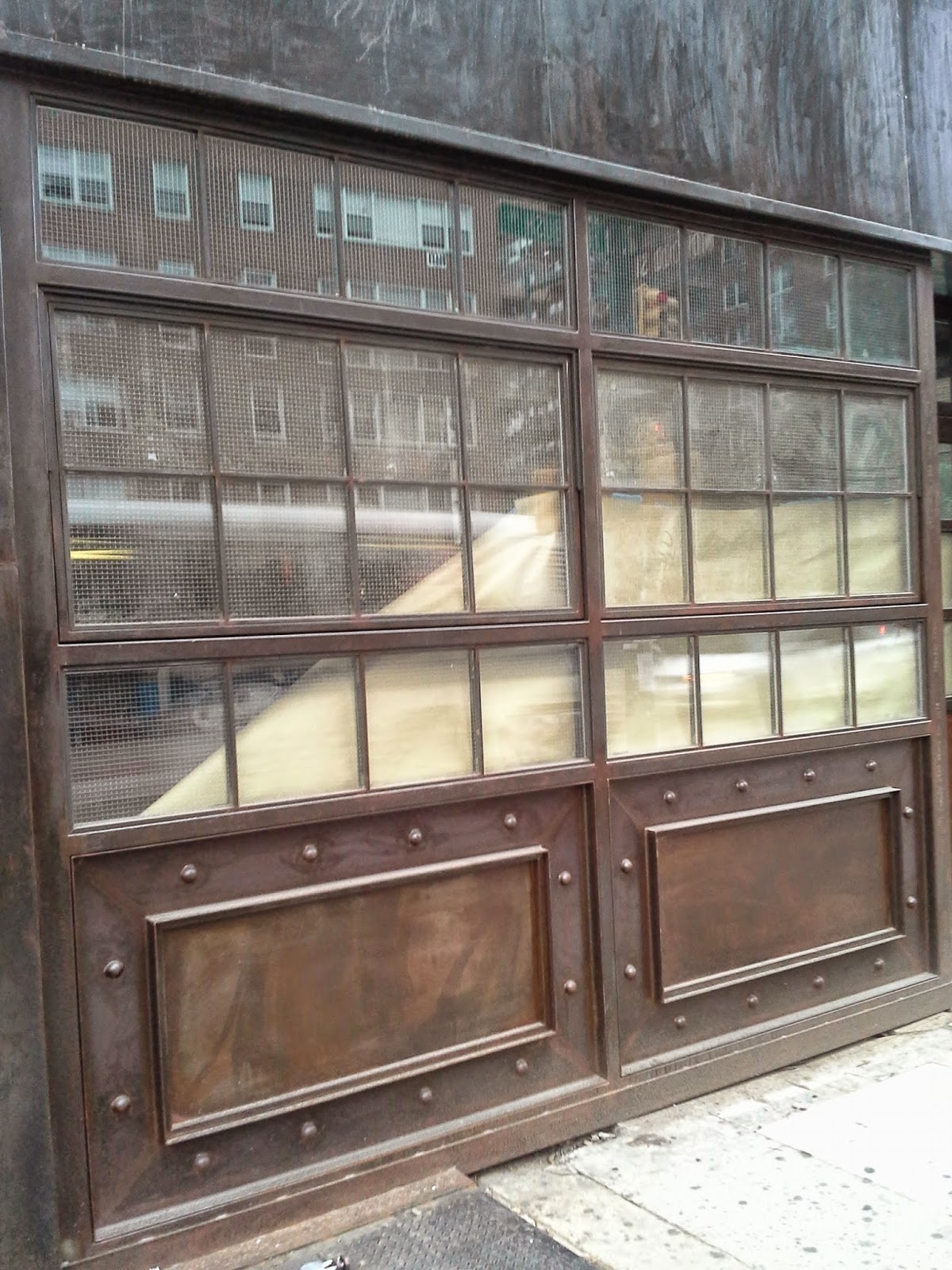 Jim Mamary's Bluebird Cafe got a (strange) shout-out as a result of a schadenfreude piece on his biz partner Alan Harding.

Hot yoga (Bikram), communal workspaces (The Compound) and Planet Fitness have joined the ever-expanding selection of beers at ground floor Brooklyn Beer & Soda (growlers you say?) in the buildings known as the Phat Albert Industrial Mall (okay, only I call it that). And yes, you can still get a cheap pair of knickers around the corner at the not quite so phat Alberts. My favorite bit of it all? Check the sign below for Bikram Yoga. It notes two locations...one in Park Slope, the other in Lefferts. Small victory for neighborhood-naming sanity. Maybe I'll have to put on my yogatard, grab me a placemat, and go sweatin' to the oldies. Or whatever they do over to there. 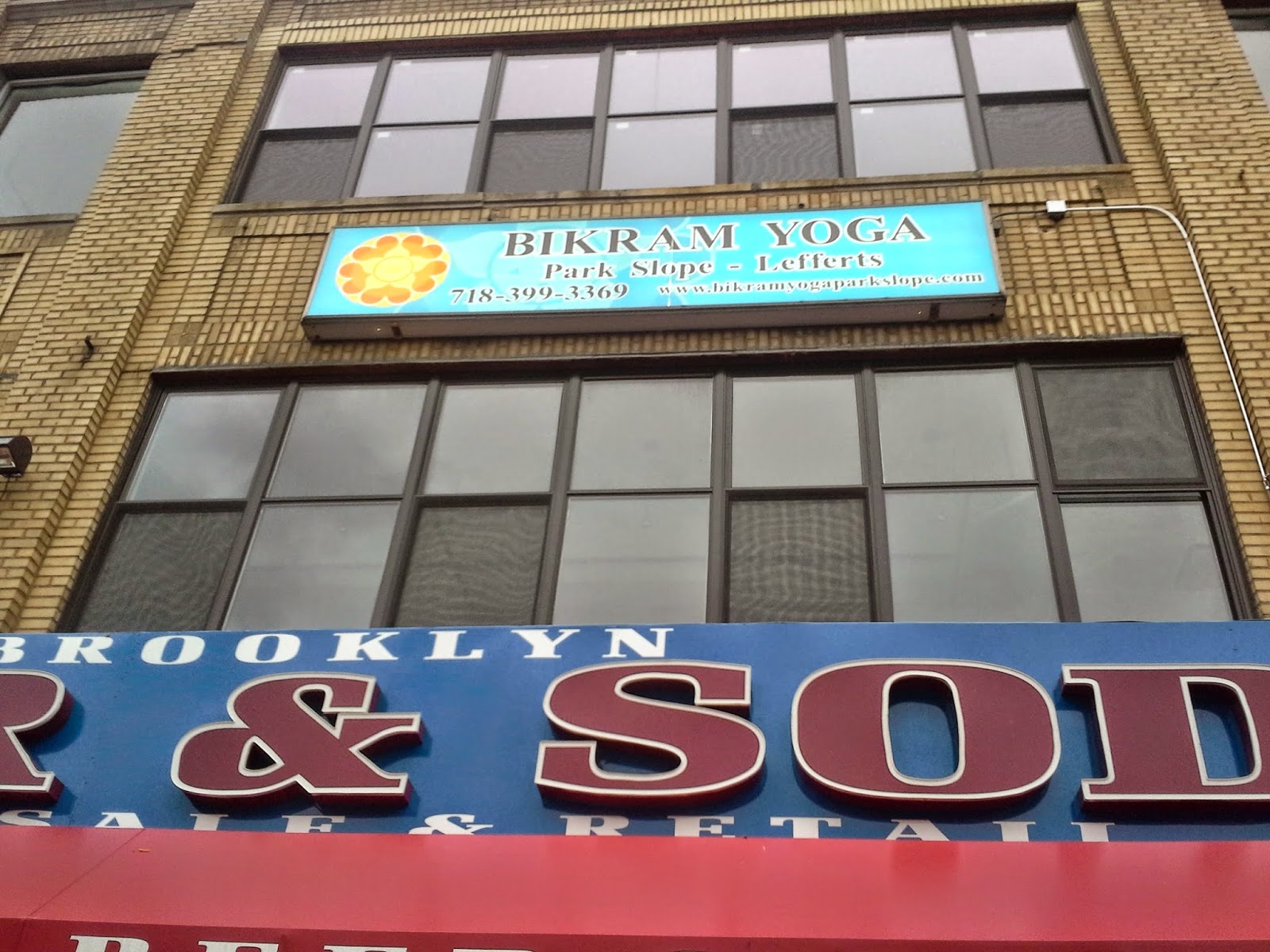 And then of course, there's the eye-popping progress of the 23-story tower at 626 Flatbush. Wow. At this rate they're going to beat that slow-moving pre-fab next to the Barclay's. 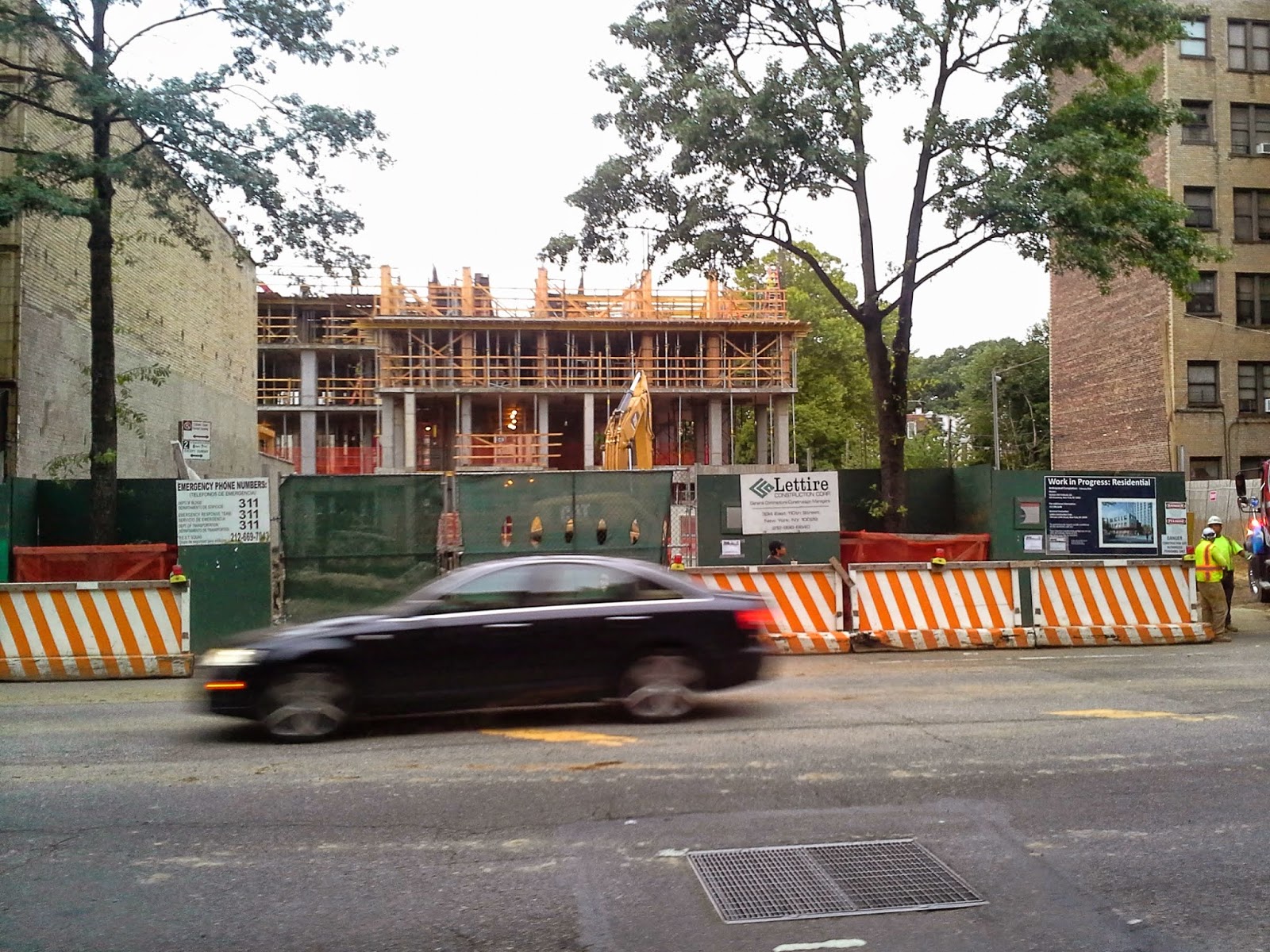 I honestly can't possibly find the words to wrap this all up in a tidy take-out container. It's like a long, long fuse that ends...I dunno. Hey, did you see that a brand new building is going up to the just-opened 123 on the Park?


Posted by Clarkson FlatBed at 8:04 PM

Loving the neighborhood progress. Very exciting! I might actually be able to convince my wife to move in......

i've been to cinnamon girl while on my staycation this week (normally i'm never home before 9pm; weh) and it's wonderful! some really good pastries and good-looking items. they even have raw eggs sold individually for 50 cents each. strange but intriguing to me for some reason.

i also peeked behind the drooping papered window at the Midwood place, and it looks gorgeous inside! a billion shiny new beer taps have already been installed, along with pretty much everything but the tables and chairs.

"For rent" sign is down on Meytex Cafe. Anyone know who took it?

Erv's is open?? It wasn't open at all yesterday... or maybe I'm just home at the wrong times. Also, I will cry if they take over the laundromat.

Hi Q! Welcome back! Thanks for the shout out. You know us so well, Carl was the man on the ladder, along with Juan from Mawusi Fitness Training, (located in an upper level store front between Clarkson & Lenox). Awesome, awesome guy to volunteer his time to help us out. If anyone is looking for a trainer or looking into trying martial arts, check out their gym.

I walked by this area. What I think is Erv's (the only other commercial storefront on that block other than the laundromat) wasn't open as of approximately 6:30 pm.

I did go to Cinnamon Girl. They have a nice selection of baked goods - began and otherwise.

The sign for "Midwood Flats" went up today. And Erv's now has a sidewalk chalkboard sign so it's easier to find. Things are happening, people!

Stopped by Cinnamon Girl today. Cold Brew was only eh, but the baked goods looked amazing. It's possible not everyone prefers coffee of jet fuel type strength, I guess.

Thank you so much Shelley. Its a pleasure working with positive and outstanding people like You and Carl in our neighborhood. I'm new to this site, and just found how to respond. So, in response to Disco Princess, we're located at 753 Flatbush Ave, on the 2nd Floor. Our Kuntaw Martial Arts School is there, and the facility is currently being upgraded to accommodate Mawusi Fitness Training, Inc., which on completion we will have Professional Fitness Training sessions and group classes throughout the day.
You can stop by any Mon, Wed, or Fri evenings between 6pm-9pm to check out and/or sign up for Kuntaw Martial Arts Classes at an affordable price for you, or your entire family. We periodically hold Women's Self Defence Classes (be sure to check for upcoming dates.
Together with Mawusi Fitness Training, Inc., we'll be having not for profit community services on the weekends. Your ideas and voluntary help are most welcome.
Juan.