The Q stopped by the soon-to-be-opened children's and baby's stuff store at the NW corner of Flatbush and Westbury Court. Local couple Carl and Shelley are shooting for a November 1st or so grand opening, and by the looks of things they're just about there. Carl's done a fine job on the interior, learning as he goes about design, and by the look of things he's got the knack. I still haven't spoken to Shelley in person, but since she's originally from out in God's Country (Iowa) like yours truly, I can only bet she's good people, a Midwestern phrase that always struck me as odd even as I learned to know exactly what was meant went Mr. Homer next door used to say it. 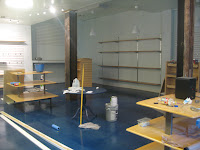 A peak inside revealed plenty of space for inventory - sing alongs and classes are in the biz plan as well, and Carl says it'll be heavy on toys and gear but light on clothes, and all the inventory will all be new, which makes it an ideal companion to neighborhood consignment powerhouse Monk's Trunk. In fact, if you ask this bargaineer, Carrie McLaren's shop on Hawthorne'll keep 'em honest. Was just there today and man her prices are smokin'! Plus, she's got great taste, and keeps her small store-within-her-house stocked mouldings to hardwood with killer stuff.

Of course, if you haven't a wee one, you're probably rolling your eyes and bemoaning how even PLG Flatbush has become a stroller rink, and so right now you're heading out to one of the local liquor stores for some hooch to drown your sorrows over the sad state of retail on our major thoroughfares. But guess what...if you live on or east of Bedford, you'll soon have a brand new rotgut-hut to patronize. The weeks of speculation are over, and concerns that yet another hair concern was in the offing turned out to be unfounded. It's a package store, or packy, as they like to say back East. 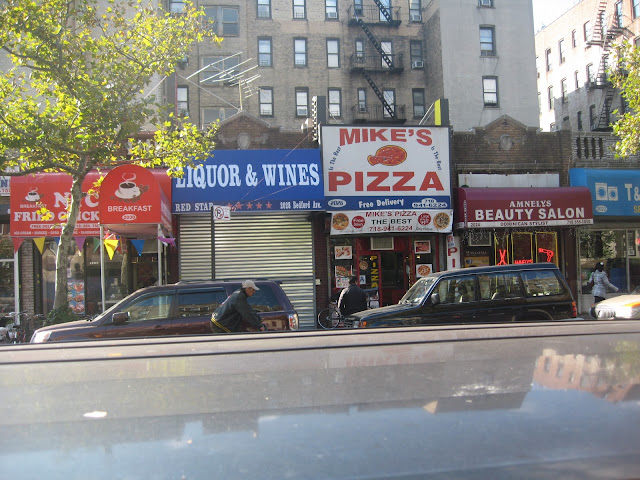 Posted by Clarkson FlatBed at 9:13 PM

Since I refuse to support Monk Trunk, I'm really excited about this new store. Yay for new!

Huh? Refuse? Were you mercilessly teased by a consignment shop as a child? Monk's Trunk is amazing, and every thing in the shop is heat treated to avoid the spread of you know whats. I agree that some things should be purchased new...dental floss, surgical gloves, tape...cute clothes for kids though are definitely recycle-worthy.

As a loyal Monk's Trunk shopper/provider I'd be offended at the first comment, except I'm grateful for the coffee-spewing guffaw that person gave me this morning. That's hilarious.

Wow, we have an internet hater - we've arrived! For the record, I feel compelled to mention that we sell new toys and accessories as well as the gently used variety.

Wow, having an anonymous internet hater is certainly a sign of success. Mazel tov!