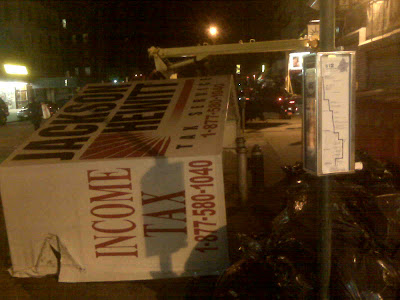 At 9PM, this was the scene in front of Parkside Cleaners - both this sign and the one for Parkside Donut were lying on their sides, blocking the sidewalk, while a flatbed with a cherry picker parked perpendicular to the storefronts. It made for one Krazy Tableau.

No doubt, Parkside Avenue has some of the fugliest signs and awnings in town. But perhaps the most egregious is (was?) the giant Jackson Hewitt tax preparation awning. Awnings are tough things to get right, and some people assume that the bigger the sign the bigger the profits. AS to Jackson Hewitt, once the 2nd place rival to H&R Block, well...I hate these companies with a passion. Masquerading as expert accountants, they're basically glorified loan sharks, offering pennies on the dollar to give you your refund up front. Oh, sure, they probably help the occasional old lady who just needs someone to fill out the forms. But 90% of the people going to these places are best off filing the 1040A or even the EZ - hardly tougher than applying for a driver's license. Folks low on income certainly don't need to be paying for crappy, often crooked, advice anyway. And Jackson Hewitt was one of the worst of the biggies - it's recent bankruptcy coming on the heels of a massive Federal crackdown on its nationwide practices.

More to the point, however, I love Parkside Donut, home to the best Pupusa's this side of Ocean Parkway. Maybe now's the time for a facelift for their sad awning? We can only hope. The font is terrible with a capital comic sans T.

Oh, and if you didn't read the Wall Street Journal today (I only read it when it's sitting on top of the garbage in a trash can), here's a chance to read their take on the pop up store at Mike's International! Scrappy PLG Arts - got give 'em a massive ovation for daring to think big and ornery. Love it.
Posted by Clarkson FlatBed at 11:46 PM

Hi, I believe this article is written by a PLG-er (I think he still lives in the hood.). I don't know the author personally, but we have some shared acquaintances.

Help me out here, people. What the heck is that previous comment? Is it spam? Was someone thinking they were forwarding a message to someone? I'm flabbergasted, but intrigued...