Sunday in the 'Bush with George

A Sunday afternoon stroll down the Avenue produced more than the usual "hmmm"s and "oh my"s and "what have we here"s. First stop, the new shop "Play Kids" at the corner of Westbury, which is opening on Tuesday. We spent some time putzing around and kibbitzing with Shelley and Carl and their adorable wee ones Elle and Will. 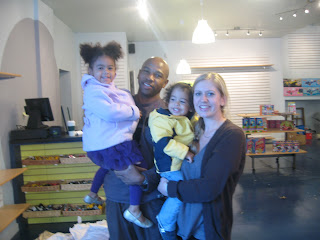 They seem remarkably at ease about their big retail close-up, and lil' Mrs. Clarkson Flatbed Jr. and I wished them well. Seems that this Friday will be the first sing-along session in the morning. so come on by ready to tra-la-la. 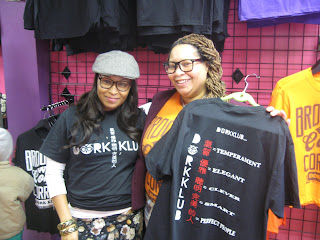 Just a couple doors up my new fave shoppe Dork Klub opened its doors yesterday, but due to the storm today was the Grand Opening. I'll admit I have absolutely no idea how you make a buck as a boutique, but I love mom and daughter team Artyste and Laura's world view. They wear the same dork glasses, are eloquent preachers for the Gospel of Dork, and the bags and clothes are handpicked to create a seriously offbeat aesthetic. What started as the name for a group of off-beat teens at Artyste's high school (remember Breakfast Club?) has become a reality store, and we wished them luck as well, then headed up to the old Mike's International for some neighborhood art love.

The scene was hoppin', the music was an intriguing blend of guitar and steel pans, the art was all over the place from landscapes and still-lifes to comic-booky to photos to kids paintings from the Caton School (PS 139). The place was full of just the sorts of people you've come to love in the North Eastern Flatbush region, and a poorly directed video of the scene looked like this:
There is something in the air here, can't quite describe it, since it's not just about any one person or a grand movement. There's an elemental Flatbushian essence to our neighborhood that defies description and bucks the usual Brooklyn trend towards bourgie blandness. So many smiles on faces today...perhaps a sign of relief that winter had not in fact invited itself over before the agreed to three month sublet from mid-December to mid-March, during which time darkness and cold become grudgingly tolerated, and we all linger indoors a bit longer and cry more often, but usually for the joy of close proximity to the ones we love.

And besides, snow is always an excuse to blow off schedules and lists.
Posted by Clarkson FlatBed at 11:09 PM

Curious, Clooney, Burns, Sand, Soros...take your pick. They were all out strollin' up and down the 'Bush yesterday!

Not (either) Bush, however - seemed the obvious one, but I was hoping it was just a Halloween trick!