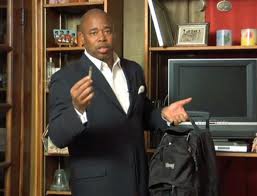 According to the endlessly gabby Rock Hackshaw (who ran against Mathieu Eugene for City Council last time out), our current State Senator Eric Adams will run to take Marty Markowitz's seat as Borough President in 2013.

That's right. Brooklyn might get its first African-American borough president, and in my opinion, he would be an excellent man to represent an incredibly diverse and getting diverser "city." Adams works well with all sorts of constituencies, and he's an approachable and principled dude. I cannot speak for his personal life (he and I don't take vacations together), but I do like what I've seen so far. His brilliant "Stop the Sag" video explaining why young men need to hike up their pants, has 167,000 views and counting. As a former police officer, he sets a great tone on crime and relations w the NYPD. And he's a civil rights liberal in a borough that, in my opinion, needs to wake from its artisanal-cheese political complacency. There's so much talent and brains in Brooklyn...we could be leading the country on so many progressive fronts, and I'm hopeful we can influence the next mayoral race and national issues in a positive direction. I know that sounds very vague, but I do think a strong borough president leading the charge and representing the "entire" borough is important!

Markowitz will leave an impressive legacy of successes and controversies. Sure, the borough president has limited powers, but they're extremely important powers when it comes to getting things done - appointing board members and setting budget priorities is a lot more leverage than most people probably think. He can't really take on City Hall, but he can line up forces against it. And yes, that arena is as much his as Ratner's.

Anyway, thought you'd like to know that the guy who until very recently kept an office on Flatbush near Patio Gardens might soon be keeping house in Borough Hall.
Posted by Clarkson FlatBed at 7:45 AM

Marty Markowitz leaves a legacy of buffoonery and corruption. Can't wait to see him go! Eric Adams is wonderful and I would love to see him at Borough Hall (so sad to walk by his former office, with the "For Rent" sign out front). With ridiculous upstate Republicans (and a few of their colleagues down here) trying to gerrymander him out of his Senate seat, where better to be than back home in Brooklyn? No more Albany winters! Yay! Eric, Brooklyn loves and need you, especially since you've gone on the record against the Rat, to whom Buffoonowitz delivered us. Save us!

Where do I volunteer?

I didn't know he moved from his Flatbush office. And I tried to call his office last week, but I didn't get an answer. Where is he now, and what number do I dial?

what has he done for us? who cares about the stop the sag video?

Dan: Perhaps you could clarify what you mean by "done for us." Eric has led on many issues, been incredibly responsive to community concerns, tried to bring together various constituencies to tackle problems...here's his stellar (in my view) record on key votes: http://www.votesmart.org/candidate/key-votes/69129/eric-adams. He was a major behind-the-scenes guy on gay marriage. He is a state rep, and as such, his bag is the business of NY State. Granted, NY State government is a wreck, but he echoes my own sentiment on nearly every issue. So...I'm all ears to the negatives, or to insights you may have learned on how a State Assemblyman SHOULD bring the goods to his neighborhoods. And he represents a fair number of them - parts of Crown Heights, Windsor Terrace... Like I said, I want to hear more of your thoughts! the Q

Correction...State Senator. By the way, heads up to the new gerrymandered districts that may very well change who's your rep.

Adams has gotten significantly worse at doing his job in the last year or two--seemingly directly the result of having become something of a star. He used to speak in a very direct, modest way; now he pontificates endlessly, using all these gross over-generalizations, applause lines, etc. I like him--he's not obviously corrupt and he's a relatively competent administrator--but if you can't hold your ego in check while being something as unimportant as a state senator, you're doomed at a mostly PR/boosterism job like borough president.

Considering the enormous reduction in Borough Presidents' powers since the abolition of the old Board of Estimate 20 some odd years ago, can we expect more than PR and boosterism?

You know what? I'd go for Eric's PR over Marty any day!

Wasn't aware of his gay marriage advocacy. I still haven't forgiven him for voting against congestion pricing, or his lame justification of his vote--that he remembers going on car trips when he was a kid and wants others to have the same opportunity. It seems he has been responsive to community concerns--at least I know he's held various meetings that I never have time to attend. You attend them, Q, and if you find him responsive I should defer to you. Still, I was surprised to see you get hyped up about the "stop the sag" video. who cares?

The "Stop the Sag" video is amusing and interesting. I'm not hyped...I'm intrigued. It takes a lot for a little known state senator to get 160,000+ views. Something is going on here, with the issue, and with Eric's take on it, that caught my attention and, apparently, a lot of others.

Snopes that sagging britches originated in prison and continues to amuse and concern adults across the world. It's interesting, not particularly germain to Adams' political ambitions, but telling of who he is and how he views his role as a leader and role model for young black men.