On Super Bowl Sunday, Gearing Up For Football Season 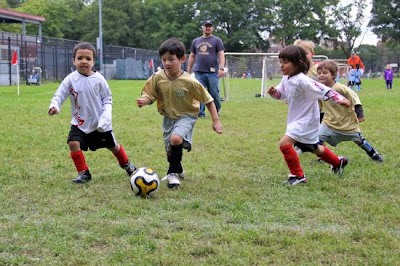 Caledonia boasts perhaps the most widely used sports fields in the country, our very own Parade Ground. I think of the word "parade" and I think Macy's and marching bands, but in the 1800s they were thinking military parade, which is hard for me to picture, though visions of Russian May Day celebrations come to mind. By the end of the 19th century, however, this giant rectangle was all about sports, sports, sports, and the archives of NY newspapers are full of stories about games played here, and apparently many a baseball star got his start here. Still does, I imagine.

But these days, soccer - née football, rules the roost. If you've got a kid who's shown interest in the game or just loves to run around and not use their hands, you probably already know about this upcoming deadline already. Or maybe you don't, and I came across notice of registration in four different places, so I thought I'd pass it along. I'm keeping it in the back of my mind too, for when my kids get older. Soccer always seemed like a pretty wholesome sport to me, though where/when I grew up (Iowa, '70s) it was played ONLY when you couldn't find the (american) football or when the gym teacher forced us to play co-ed, which was definitely NOT preferable. (btw, I don't know if they did this to you where YOU lived, but we had a solid week of "square dancing" classes, mandated by the State, during gym). No one CHOSE soccer over the other sports - in fact, Americans had to create their own beloved "kickball" to emulate our more favored sport, baseball. And I do love me some kickball, though the hipster retro trend left me feeling cold...and old.

The American Youth Soccer Organization (AYSO) has opened registration for the Spring for kids interested in playing soccer in an organized league. It appears from their website that your child must be 5 as of January 31 to qualify for the youngest age bracket. Kids are separated into groups of two years each (5-6, 7-8, 9-10 etc). From what I've heard, the league is well run and well respected. Share your experiences below!
Posted by Clarkson FlatBed at 6:46 AM