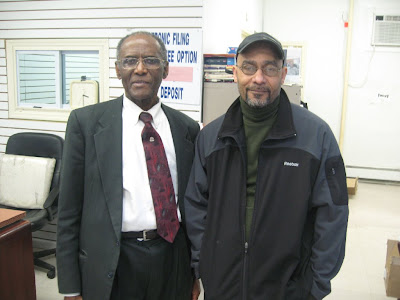 These guys know our neck of the Flabenue like few others. Since the early 1980s, these two have been part of a sometimes waxing sometimes waning effort to turn the Phat Albert's to Popeye's stretch of the 'Bush into a retail corridor worry of the mighty Flatbush name. You may know the business Compere and Compere Tax, currently near Hawthorne. Yes, Wilfrid's an accountant, and while he's actually had several different addresses, he's been a stalwart in the neighborhood through thick and thin. He currently holds the title of President of the merchant's group, though he's quick to add that it's a volunteer force and titles mean little - there's much work to be done and too few hands on deck - so sign on up, says the Prez!

For his part, Delroy Wright also has strong ties to the neighborhood and to its unique brand of politics. He was the owner of a popular bar (Handyman) for many years, one that used to stand where Rhythm Splash (previously Lime) currently resides. He moved his joint further south on Bedford near the Sears, but Compere and others convinced him he was much needed up our way to help organize the recently too-dormant commerce collective.

A little history: the once mighty PLGNA had money and a storefront on Flatbush, and they started FECMA (when Clarkson was the southern edge) in the '70s. FECMA signs can still be seen on lampposts along the rue.

What does it all mean, beyond organizing FEPMA's revived annual street fair? Potentially, it could mean a whole lot, because there are myriad problems and opportunities to address. The landlords of Flatbush are notoriously absent and lack vision, a fact that Wright confirms. So barring a concerted effort on the part of these owners to make the area more amenable to business, the merchant's are the best bet to turn around a street that is a mere shadow of what it could be. Wright calls it the Illusionary Avenue, the way it  SEEMS to hold promise and the makings of a strong commercial district, and yet there's something not quite coherent about its character, leaving one to wonder why so many shops open and shut in short order.

Mr. Compere believes he knows why there's so little permanence. He says the amount of street and pedestrian traffic, coupled with the storied Flatbush name, give the blocks an outsized allure to new businesses. Landlords are quick to take high rents from the often un-savvy prospects who are lured by visions of easy money. They see "gold" on Flatbush, but Compere knows better. By day there are precious few real "shoppers," and folks mostly pass by the storefronts to and from work, often spending their walk-around money elsewhere. Add to that the fact that many of the newcomers to the neighborhood aren't familiar with or comfortable with the current offerings, and you're talking serious disconnect. That's not to say there aren't plenty of transactions happening (legal and not so)...just not the level you'd expect from such a busy neighborhood.

Delroy says of the 120-140 businesses open at any given time along the stretch, you've got nearly 20 grocers, 35ish beauty spots, and 20 or so restaurants, mostly super-casual and take-out. Add to that my own rough count of 10 tax places and 12 cell phone stores, and that's nearly 100 joints right there. There are a few truly unique boutique type places (the awesome Tafari Tribe's Sandra Marshall-Haye is also a committed FEPMA volunteer), but many of the businesses are not of the sort that typically forms the backbone of merchant's groups. There are no banks. There are no sit-down destination restaurants. There are no wine stores (on the avenue) or comfy internet coffee houses (on the avenue). Few new stores cater to the ever-yuppifying demographics around here. It's all quite baffling, and not just to me, but to the men who've been doing this for a long long time. (A note about the beauty places: neither Delroy nor the Q see this is a negative in the slightest...the neighborhood is known worldwide for its great stylists. Some shops are clearly the labor of love of a single proprietor, but many merely rent chairs by the day or week, making it difficult to organize avenue-wide efforts around such transience.)

So what does any of it matter, anyhow? I was reminded again of just how much it matters to have leadership when I saw a piece today in a local rag about tens-of-thousands of grant and tax dollars pouring into the revitalization efforts of Church Avenue (Ocean to Coney Island). Here's the piece. They have a BID (Business Improvement District) over there with paid staff, and they won grants to redo storefronts and are in the midst of a serious upswing.

I don't doubt for a second that the reason money, ideas, vision and traffic calming are coming first to Church Avenue is leadership - it has a powerful ally in CAMBA and the BID, which by the way used to be helmed by one Marc Dicus who tried to make similar improvements up here before being unceremoniously rejected by his own Board. Church Avenue was glad to have him though. You can read that sad story here...

We wish Mr. Wright and Mr. Compere well in their endeavors. I think they need all of our support. We could all be better served by a stronger, safer and cleaner commercial Main Street. Email Delroy here if you're a business person or prospect or interested resident who wants to get more involved. The Q will be checking in with FEPMA regularly to keep you in the loop and update you on their progress.

Ok, so... When Mark Dicus' efforts to form a BID on Flatbush were thwarted, he directed his efforts to his then employer - Church avenue BID. He's a highly motivated, intelligent guy who could have helped usher serious change on Flatbush, but he was beaten down by a few people who did not understand how important a BID can be in improving a commercial stretch. Thus, Chruch Ave got the benefit of Mark's efforts, not Flatbush.

That being said, why, if they have been active in the neighborhood since the 1980's, haven't the gentlemen featured in this article pushed to create a BID on Flatbush? The street fair that happens once per year seems to have no lasting impact, so it seems like a pointless endeavor if their focus is truly on improving our commercial strip.

I also do not understand why people such as Yvette Clark and Eric Adams have not been able to convince the landlords around Flatbush and Lincoln to charge market rate rents and appeal to savvy business owners. Real activism from elected officials is needed - not just an occassional, "Please?"

I am not trying to be overly negative, but I've lived in PLG for 8 years and I have not seen any results from FECMA and FEPMA efforts. We don't even get lights strung up across the street during the holidays.

The best thing anyone could do for Flatbush is to convince Mark D to get involved again. He might be over the PTSD from PLUS, and if teamed up with the right people, he could do marvelous work. Let's wage a campaign to bring him back!!

Here's what I know from Delroy, then I'll ask him to respond personally. They DID start the process towards BID'dom, even going as far as to keep files on all the anonymous LLC's that own buildings on Flatbush. Apparently, when you try to start a BID you need 51% of PARTICIPATING landlords. If they don't respond to your mail, they don't get counted towards the "quorum."

AND...FECMA went dormant in 2005 when Delroy moved. They started back up last year. I do think they need our support, since they're the guys doing it now. Next quarterly meeting is March 8th, probably at Tafari.

Hmmm... 51% - I think that would be possible without convincing the owners around the intersection of Lincoln and Flatbush, assuming that each owner counts as 1. There are plenty of other buildings that seems to have nicer businesses moving in. Strong community activism and government involvement in the campaign to get a BID going could probably help quite a bit... Eric Adams please stand up! It would certainly bolster his Boro President campaign if he could speak to successes with improving Flatbush.

Exactly - the BID needs landlord support, which has not been forthcoming. And I know of at least one landlord AT the intersection of Lincoln and Flatbush, who would be interested in a BID and has said so in the past. Now if you're talking about the landlord of the buildings containing Gino's, the Subway sandwich shop, and, across the street, the ex-Blue Roost space (yes, all the same owner, just different LLCs), that's another story. You can effectively eliminate both sides of the block between Lincoln and Maple/Beekman Court, because, with the exception of 10 Maple (the Ray's grocery building), they are all owned by the same group of men in Borough Park. The Ray's Grocery building, and several others throughout the neighborhood, both on and off Flatbush, are owned by another group of men, this time in Williamsburg.

In terms of Eric Adams standing up, that's a hard one too - as you can see, he's just been forced to move due to a rent increase on his space (with a brand new For Rent sign now on the building).

However, some of these landlords might listen to him - that's how PLGArts and PLGNA got use of the Mike's International space - apparently the Senator's staff "helped" the owner with some "problems" he was having with various properties...

Ok, but the quesiton is:

Does the single owner of all those buildings you mention count as 1 in the numerator, or does he could as 4 because of the 4 buildings he owns? If he counts as 1, then it might not matter if he's resistant. Other owners between Empire and Flatbush might be enough to get the 51%. I just don't see any evidence of an aggressive campaign to start a bid since the demise of PLUS.

You're right - I don't think there has been any aggressive effort to do much of anything with Flatbush since the demise of PLUS - as noted in the original post, FEPMA was dormant following Delroy's move out of the neighborhood and has only recently been resurrected. PLGNA, too, should be involved here.

And as to whether it's calculated by legal entity or actual ownership, I don't know - but what's the difference? Essentially, each building on Flatbush is owned by a different corporate entity, but the actual owners behind these corporate names are probably no more than 10 at most.