Today some quirky dude dashed off a letter to Tish James regarding the rancor surrounding the proposed (then withdrawn for revision) plan to create a "campus" by closing Crown Street just north of PLG in Crown Heights. For those wonky enough to read it, I salute you!


January 31, 2012
Councilmember Letitia James
67 Hanson Place
Ground Floor
Brooklyn, NY 11217
Dear Councilmember James:
I’m writing regarding recent conversations that have become quite heated concerning the on-again off-again proposal by Medgar Evers College to create green-space along Crown Street. From my seat at Community Board 9 meetings, I’ve been struck by the rancor surrounding the issue, and I thought I’d bring to your attention the fact that not all constituents in the district are so vehemently opposed to the closing of Crown streets towards an ambitious project to create a “campus” where none existed before. I don’t believe you’ve done enough to elicit opinions on both sides of the coin, and many of us are only now coming up to speed on the issue. Those who live near the school, however, have had time to gather forces and draw lines in the sand. For the betterment of our entire community, including the hundreds of students and teachers who study and work at the College daily, I hope that level heads will prevail. 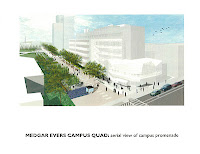 I noticed that you and other elected officials were quick to pick sides on this issue, even before the final plans have been submitted by the College. You yourself noted that the heated opposition of locals led Medgar Evers to withdraw its proposal for another look. So in essence, even as you complained “we should not even be here tonight” at the November CB9 meeting, you were publicly denouncing the plan, and calling it dead on arrival.
This does not strike me as the Tish James that many of us have come to respect and cheer! Perhaps the passions that were on display at a non-official meeting held at a local church last summer, the meeting where supposedly 100% of the attendees were against the plan, blinded you to your responsibility to learn all the facts before committing to a council vote. I too can pull together an angry mob on any number of issues, and were you to attend such a meeting you might think that sentiment was unambiguous and unanimous. But this is supposedly a democracy, and the loudest side of an argument is not always the majority side, or the reasonable side.
I for one would welcome a project to bring a campus to a college that has shown an enormous potential to educate folks who might not have dreamed of going to college in an earlier generation. The fact that Medgar Evers even exists in a neighborhood that has suffered much through the years is a testament to the optimism and strength of visionary public planning. Yes, there would be inconveniences if the block closes.  But listening to the arguments against closure of Crown Street, I was struck by the lack of solid “community minded” arguments  - NIMBY was on display, but not much else. A slightly longer commute is a drag, but hardly the reason to keep a College from pursuing its longterm vision. I’ve biked and walked Crown Street many times at various hours, and I’ve never seen any serious congestion that would lead me to believe that drivers will do anything other than do what drivers always do – make choices about their route based on what roads are quick and available. They will adjust. One local resident, in explaining his opposition to closing this single block, went so far as to exaggerate that his commute to drop off his kids at school would go from 5 minutes to 25. I'm not buying it. As for the potential loss of onstreet parking, I am constantly struck by the fact that car-owners seem to think that it is the City’s responsibility to provide them with parking! Free parking is not even a remote possibility in large swaths of Manhattan and downtown Brooklyn, for instance, where parking is available to NO ONE. I for one, as a car-less citizen, have never demanded that the City provide me with public space for my private use. And really, parking could be added to the planned closure, for Crown Street residents even, if that were really the issue. I also heard people state that “the Botanic Garden is RIGHT THERE!” It’s close, yes, but it is not free, and its hours are limited. The park? Actually not that close – about a 10 minute walk, hardly convenient for students between classes. But I don’t think parking, or green-space, or commuting, or traffic is really the biggest problem here. So what REALLY is the issue?
In talking to many of the vehemently opposed residents of Crown and Montgomery Street, I see that they have felt shut out and neglected by Medgar Evers for years. The current administration has alienated many of its neighbors – how and why I cannot say. So the unwarranted anger that is currently on display represents, in my view, a deeper underlying distrust between locals and colleges officials. Given that backdrop, it is even more unwise for elected officials to choose sides without giving both parties more time to get at the heart of their dispute and for a partnership to be repaired, if it ever existed before.
Community Board 9 is not perfect; you are right to wonder why so much confusion surrounded the discussion of the project. We certainly got off to a rocky start on this issue! But I do hope you will keep an open mind to the extraordinary benefits that might ultimately be reaped in the long term. By closing just one street, thousands of potential graduates would visibly see that a quality education is not only within their reach...it's right in their own backyard. The greenspace is meant for all, and I hope that opponents to the idea will remember that this cannot be said of parking spaces, which benefit just a few.
Thanks for giving me the courtesy of your time. I look forward to seeing you again soon.
Very best,
Tim Thomas
31 Clarkson Avenue
Brooklyn, NY 11226
P.S. I am Chair of Environmental Protection Committee of CB9, but this letter is from me personally and reflects my personal views alone. I’ve copied members of the Board, as I would even if I had no governmental role to play. And I've posted it to my blog. You may respond to me personally at any time, either copying others or not.
Posted by Clarkson FlatBed at 9:51 AM

Ever since congestion pricing was defeated, I'm convinced that drivers are deadset on killing any proposal for progress. This doesn't surprise me in the least. People are addicted to their metal machines. And to plastics and disposable junk made by slave laborers at filthy plants abroad. So long planet Earth, it's been nice knowing you.

This is a great letter, Tim. Whether the college gets its new green-space quad or not you made some incredibly important points to Tish James. Local politicians enabling rancor instead of discouraging it is seen so much more in NYC than other cities. People need to know that. Time to start calling politicians and leaders out on that. And good for you for pointing out the idiocy in opposing improving a COLLEGE. A college that gives low income young people better lives. It's nice of you to strive to understand why the opponents were so opposed to this plan but I'm going to have to call them selfish. It's too clear that's the case.

Tim I like this letter so much I'm even going to show my name next to my post!

Official update: Crown Street between Bedford and Franklin is going to be narrowed instead of closed completely.

However, I heard that the DOT is going to close that portion of Crown Street anyway...