Noah Budnick of Transportation Alternatives met with the 71st of pedestrian and bicycle safety. I spoke to him early this morning and he felt the 71st really had it together in terms of addressing traffic safety. That's high praise coming from Budnick, who along with TA can be counted on for a realistic appraisal. The City is truly moving in the direction of increased traffic safety on all levels. Let's keep the pressure up for Parkside & Flatbush.

AND...committee chair Ed Fanning has submitted notes from his CB9 committee meeting. I'd call your attention to the final item, in which Greg Haas from DOT updates the committee and receives suggestions on what's a poppin' along the Flabenue since the recent traffic pattern changes. He addresses a number of concern that I've had, and that many of you have expressed as well. 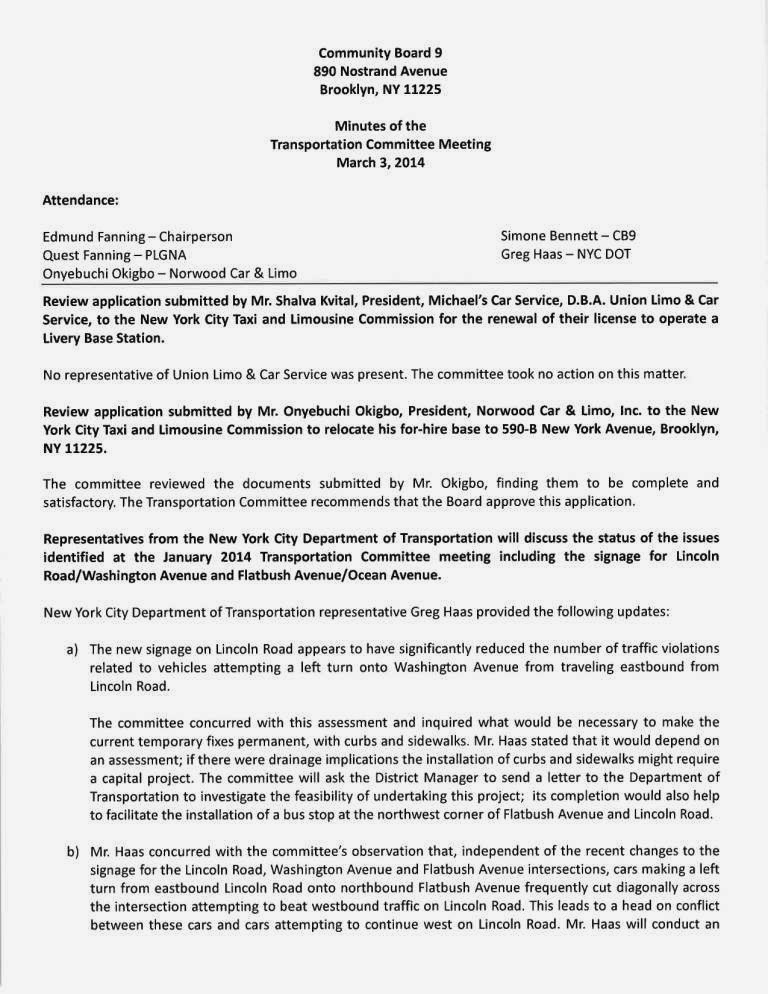 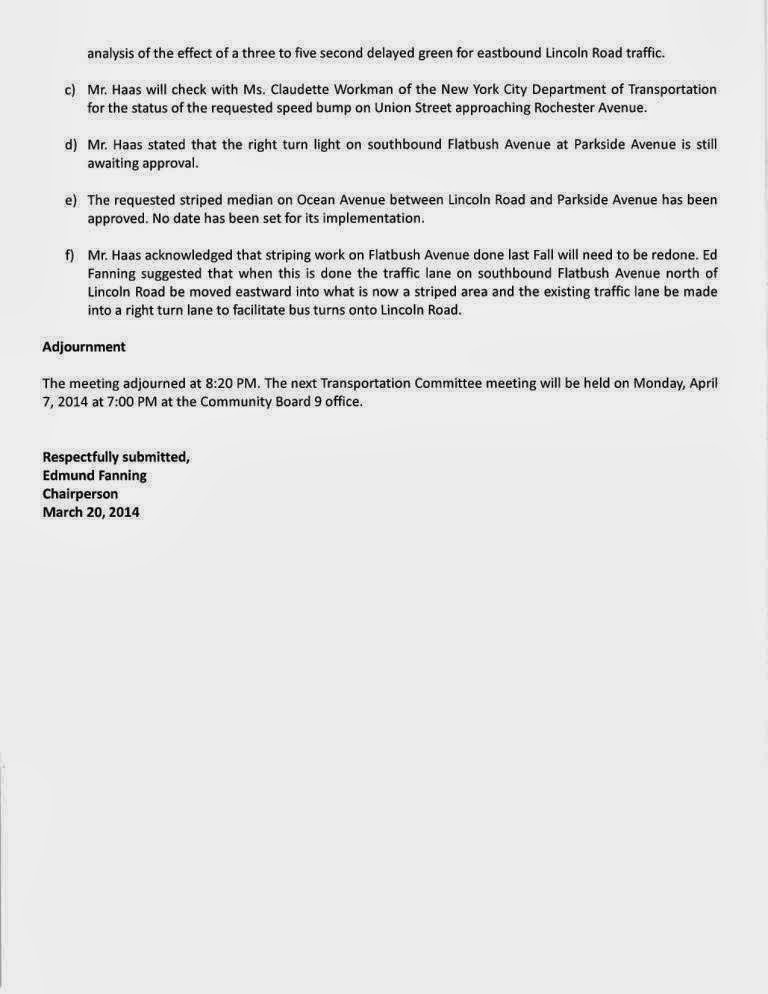 I would add the Ed's proposal to move the B41 express stop from the Wendy's to that Lincoln Road "bulb," the lines created to prevent eastward Lincoln Road traffic from turning left onto Washington, is pure genius. Without adding travel time to the stop by...anyone really...you create a safe passage from the northbound B41 to the train station, preventing the massive jaywalking scene between Phat Albert and the Prospect Park Station.

What do you think?
Posted by Clarkson FlatBed at 2:08 PM

Ed's proposal for the B41 stop is a great idea. I would be willing to stand on the corner collecting signatures for that improvement!

There still a problem on Lincoln & Washington, but there is no denying that things are much better since the barriers and better signage went up. Tweaking the lights is a good idea too, especially if it includes a pedestrian leading interval too so the left turning cars stop trying to race the pedestrians through the crosswalk.

On the 71st... I went to the CB9 Public Safety Meeting on Wednesday hoping to hear how they are implementing Vision Zero but they were a no show. There has been an uptick in ticketing in the 71st, you can see that on this map http://www.wnyc.org/story/traffic-tickets-across-city/ but I would really like to hear from the precinct exactly what they are doing and planning to do.

Add my enthusiastic vote for moving the 41 express stop.
But there are two issues (at least) that will have to be worked out to make this successful:
When, as often happens, more than one bus arrives at the same time, wouldn't they clog up the intersection? And second, access to the gas station needs to be restricted to a couple of clearly marked lanes, as opposed to the current enter-anywhere, exit-anywhere situation.
Perhaps both of these can be solved by limiting access to the gas station to the Washington Street side of the island and making most or all of the Flatbush side the bus stop.

Diak, I have been trying literally for years to try to get someone to address that gas station situation to no avail except for a failed attempt to put in totally moveable barriers by DOT. Good luck.

I hope that they repaint the lines soon - Flatbush is de facto 4 lanes again and just as much of a mess as before.

How would moving the NB B41 limited bus stop to Lincoln Road improve things? Would the location for SB B41 Limited stop remain unchanged?

By the way, years ago, there was a B41 bus stop by that car wash that is now closed. I don't know why that bus stop was discontinued. Maybe that local bus stop can be resurrected instead.

Diak: It's not about improving traffic. It's about pedestrian access and safety. Currently everyone jaywalks from Phat Albert to the subway opening on Flatbush. Folks would use the Lincoln Road entrance instead, or cross at Lincoln and walk up Flatbush.

The Limited Bus would also be much closer to many more people. It would be more in the heart of Lefferts. Folks from The Ebbets houses and Tivoli Towers and Washington Avenue would have the same distance since they can walk down Washington as easy as walking west on Empire.

And finally we'll be able to shut down the boggle at the BP station, perhaps even get them to stop parking cars in their illegal parking lot at the south end of their "island." We'd build up the island to include the dead space that was created when we closed left-turns from Lincoln Road onto Washington.

Okay. Now if only something can be done about the SB traffic on Washington that turns onto Lefferts Avenue. :) That intersection at the NE corner frequently backs up. This morning I had to play frogger while crossing in front of a bus that was taking up most of the space in that pedestrian walkway; I had the light.

There you go, Diak! Now you're getting in the game...

Mr CF, Are you confusing my comments with those from disco princess? I'm 100% in agreement with you and your last two comments seem to be correcting me. It was me who brought up the jaywalking problem around Wendy's/Albert's in the thread about the pedestrian fatality on Empire. And I think your idea to move the 41 stop is definitely a solution worth pursuing.

Can't take "yes" for an answer?

I think the jaywalking problem on Flatbush near Empire is independent of the location of the NB B41 Limited stop. That's why I don't see why moving the bus stop will be beneficial.

What impact will it have on the ubiquitous dollar vans? ;)

So sorry Diak. You're right. I confused the two of you. And I was applauding Disco's anger. Burn baby burn, Disco! Inferno!

Disco, the Dollar vans are here to stay. The question is being addressed by increased enforcement. If we keep up the heat, and take away enough licenses, we can make it unprofitable to drive like a maniac. Fitzgibbon said he's been cracking down.

The 71st, and the Community Board, and DOT and the MTA (buses hate them too) need to feel the heat. Folks have complained about them for a long time, but no one to date has made it their mission. Just a lot of hot air.

Once again, if we had decent representation...

<< If we ... take away enough licenses, we can make it unprofitable to drive like a maniac. >>

You're assuming they have a license...

And if pigs had wings, they'd fly (or run for City Council or something).

When the dollar vans first started, they were unlicensed. My understanding is that since then, some have been allowed to get licenses. If you can't beat them, join them.

They still may stop by that Wendy's and some passengers may still cut across Flatbush to take the Q. Maybe closing the Flatbush Avenue entrance at the Prospect Park station may do more to curtail the jaywalking issue.

I've actually seen the 71st pull over many dollar vans recently, most of which do not have livery plates.

Personally, and I know many disagree, I don't understand why we have licensed dollar vans at all. What I'm told from people who work in city government is that van lines are intended to fill gaps in public transit. The B/Q and the existing buses are perfectly adequate, and traffic would move much more smoothly if dollar vans weren't weaving, speeding, double parking, and slowing things down for the rest of us. I would much rather see public investment in improving bus performance than official support for disorganized and (mostly) dangerous vans.

I'd be one of the folks leading the charge to keep them. I LOVE Dollar Vans. Two bucks. You can get 'em when the bus don't come, or late at night. You can't believe some of the crazy music they sometimes blast. They're a wonderful tradition that reminds me of the Caribbean, and provide a lot of jobs. I honestly think they're a treasure.

BUT. They need to be better regulated, and I think we're moving in that direction. Each time a company comes before the community board they complain as much as we do about unlicensed "cowboys." When I get in a clearly marked van it's always noticeable how much safer they drive. Not SUPER safe. But they're career people who generally have a sense that to have a serious crash might ruin their livelihood, as well as injure others. Those guys are more like cab drivers. The cowboys? Yeeeeeeeehaw. Look out.

Re: "Personally, and I know many disagree, I don't understand why we have licensed dollar vans at all."

This is why: "B41 Is Slowest Bus In Brooklyn, Transit Group Says" (link: http://fortgreene.patch.com/groups/transit/p/b41-is-slowest-bus-in-brooklyn-transit-group-says)

The dollar vans hustle. I can see taking one of them in a pinch instead of waiting for 15 - 20 minutes (or however long it takes for one to show up) for a B41 (Limited or local) that is supposed to come every 5 - 7 minutes (for example) according to the posted schedule (ha).

If sufficient traffic changes can be made on all of Flatbush Avenue to make the B41 more efficient (I'd love to see a B41 SBS!), then maybe there won't be much of a market for the dollar vans. Call me cynical, but I'm not optimistic that it will happen anytime soon.

DP, we're basically making the same point. If anything, the dollar vans help to slow the bus down.

That is what I meant, too.

I wrote, "I would much rather see public investment in improving bus performance than official support for disorganized and (mostly) dangerous vans."