In preparation for next Monday's town hall meeting with the Borough President, I thought it might be worth sharing what I've learned about zoning. Oh how I wished Community Board 9 weren't situated so that I'm in the lower SW corner. It kills me that I can't present these maps centered around m'beloved Q so as to show Caledonia in all her glory as well. Alas. This is the hand the Q has been dealt.

CB9's wonderful intern Ben, from Pratt I might add, has done us the enormous favor of inputting all the zoning for the district. Below you see all of CB9 in her glory. You'll note that most of the district is R6, with Lefferts Manor showing R2 with a smidgen of R5 above it, and then other R2 zones up near Eastern Parkway - the beautiful freestanding mansions on Carroll and President. The area that's R4 to the east of that is a major concern to the Orthodox community, as I've discussed in more depth here previously. There's actually quite a bit of R7-1 along Flatbush/Ocean and Nostrand and parts east, the very distinction that led to the planned 23-story tower at 626 Flatbush. For the purposes of this Town Hall meeting, R7-1 is the name of the game, since there's really no limit to height you can build, if you have a big enough footprint. 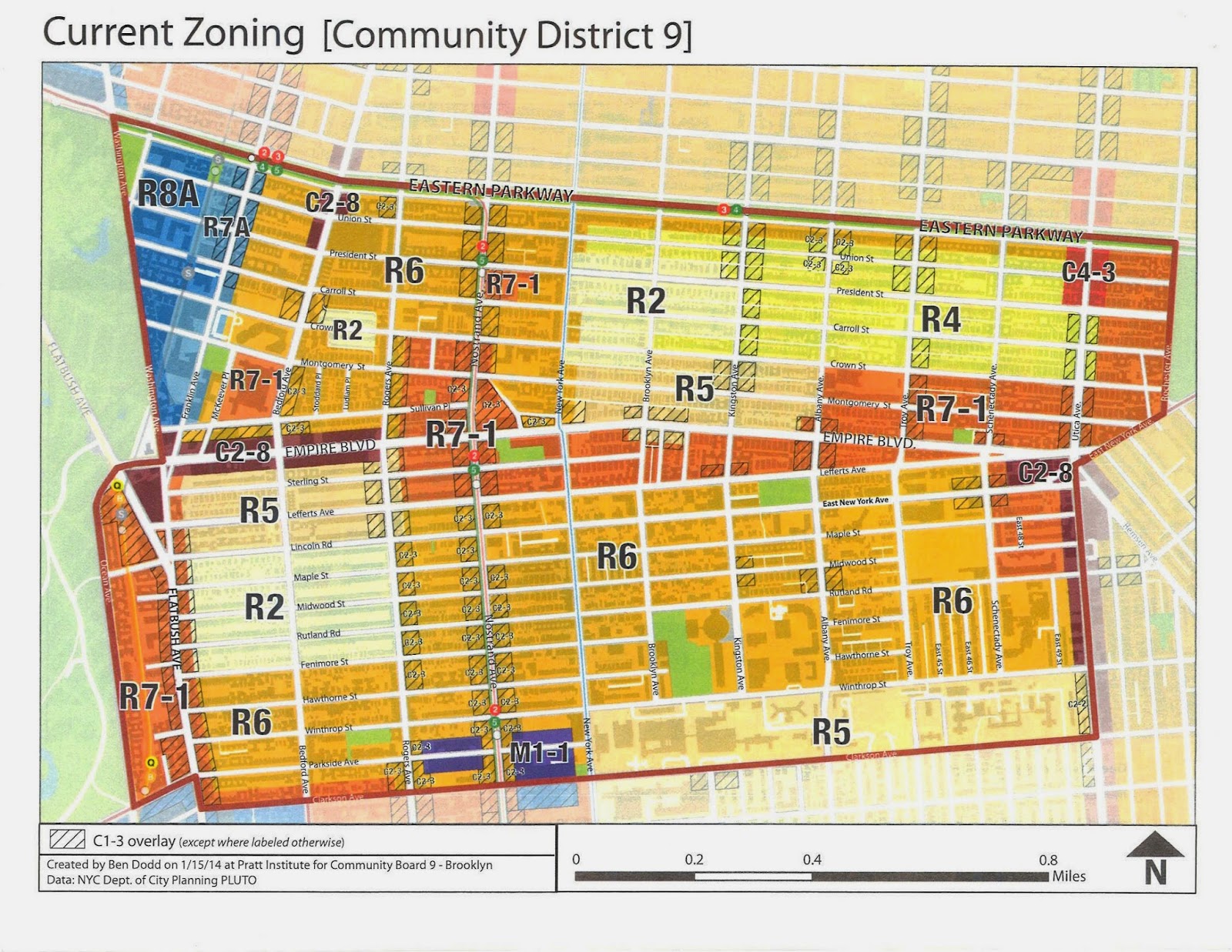 Below is the blowup of "our" quadrant, as in Lefferts, and you can see that the junky C2-8 distinction of Empire Blvd has ensured that the stretch from Flatbush to Rogers has stayed fast food and storage etc. The Q happens to reside in a big fat chunk of R6, which too has few restrictions on height if you have big footprint.The building going up at 50 Clarkson, for instance, could go quite high and block the light of tenants living on either side of it, save a covenant from the previous houses that supposedly limits the height of the middle of the three Victorians that were razed. We'll see how that one turns out, perhaps after a bit of a scuffle. Geez, it seems you can't walk ten paces without running into a real estate battle around here. 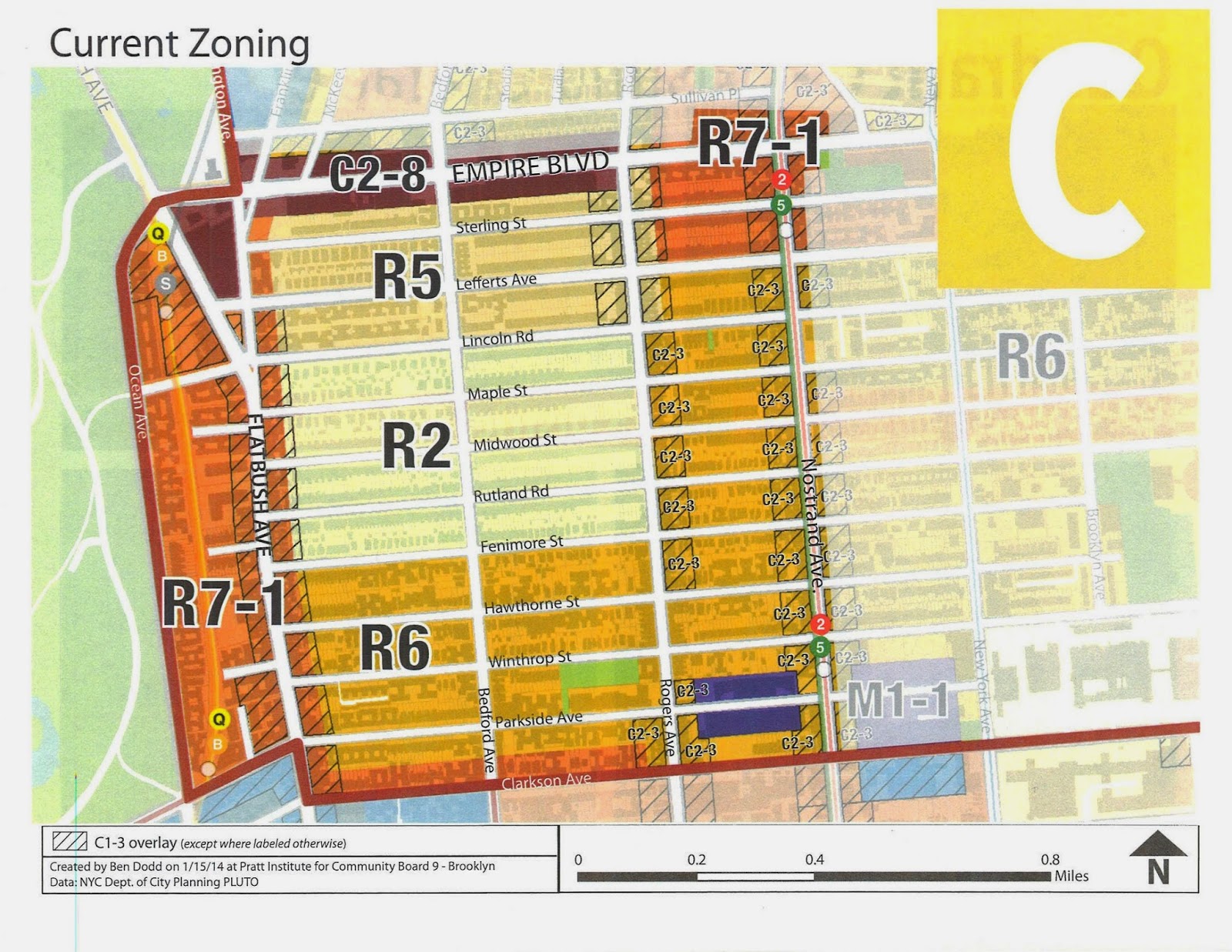 In our beloved Quadrant C, the "existing character" of the neighborhood can be described in terms of zoning. Current zoning dates to 1961, which I'm told happened AFTER Patio Gardens was built. If that's true, R7-1 was likely given to this stretch to bring Patio Gardens into compliance. 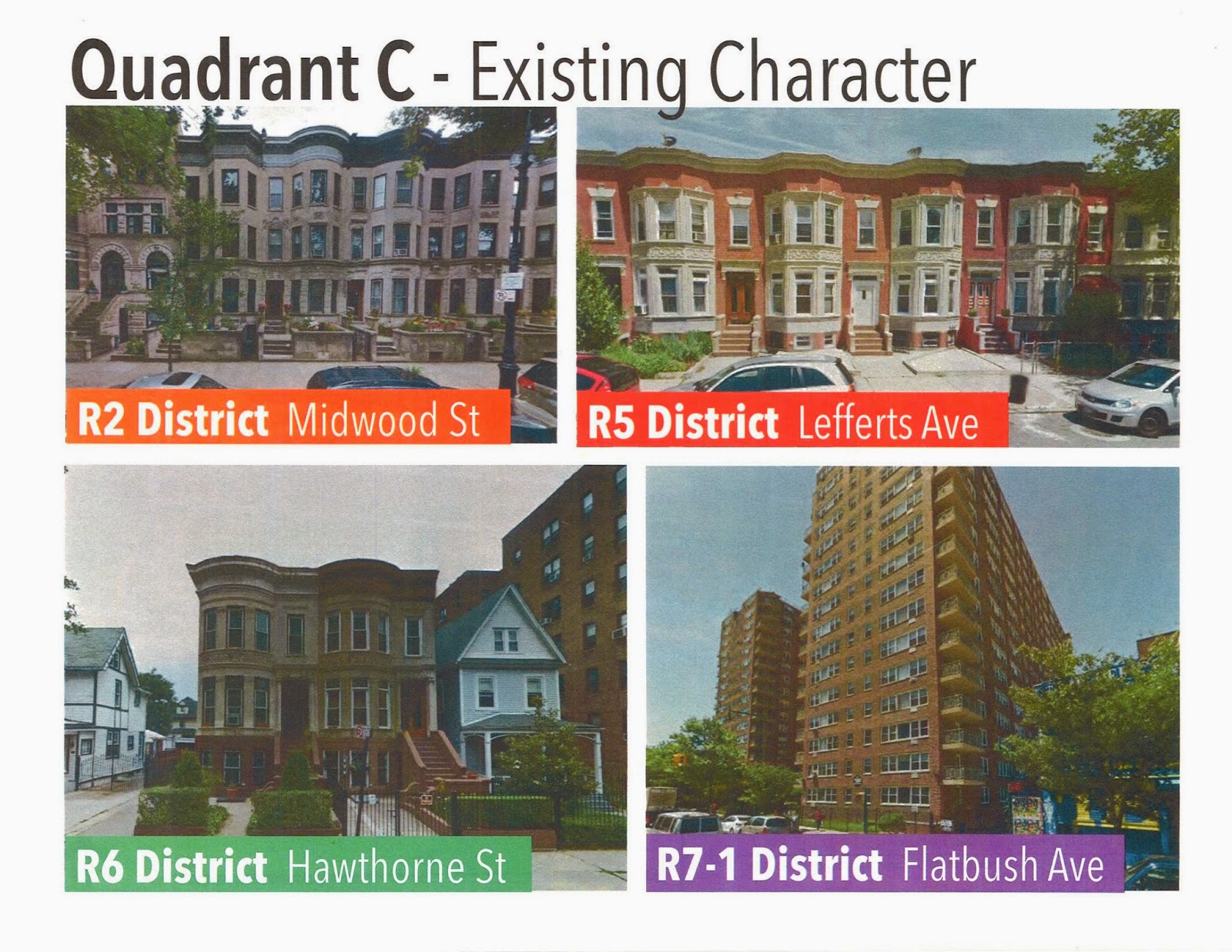 Before I go too much further, want to see the original brochure for Patio Gardens? Of course you do!

And how about a hilarious video from a couple years back announcing apartments for rent at the very one and the same? The music alone is worth the price of admission. Which, by the way, is a click of your mouse.


Sorry. Got sidetracked there. Below is what sort of thing you can build in the various zones. Then some maps of the other quadrants. 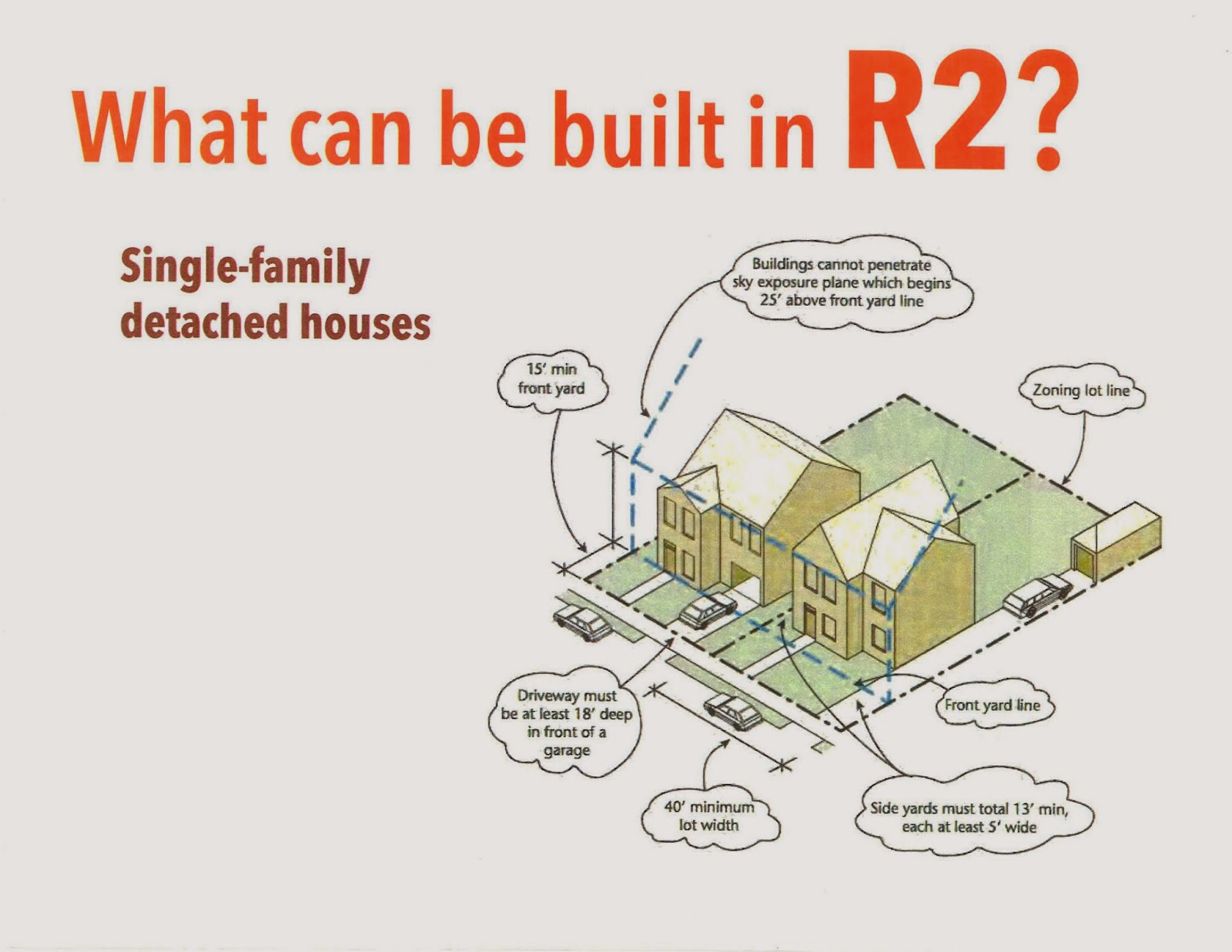 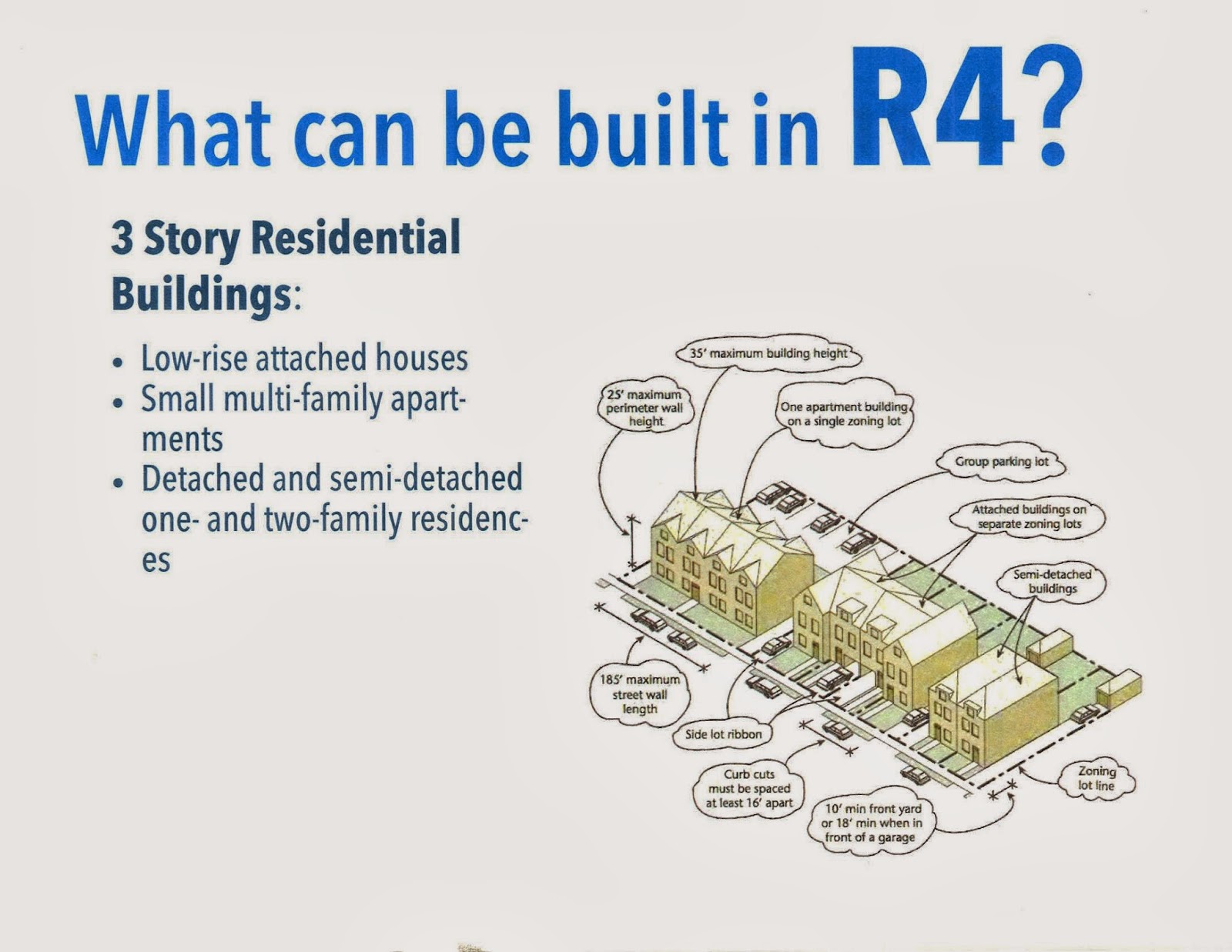 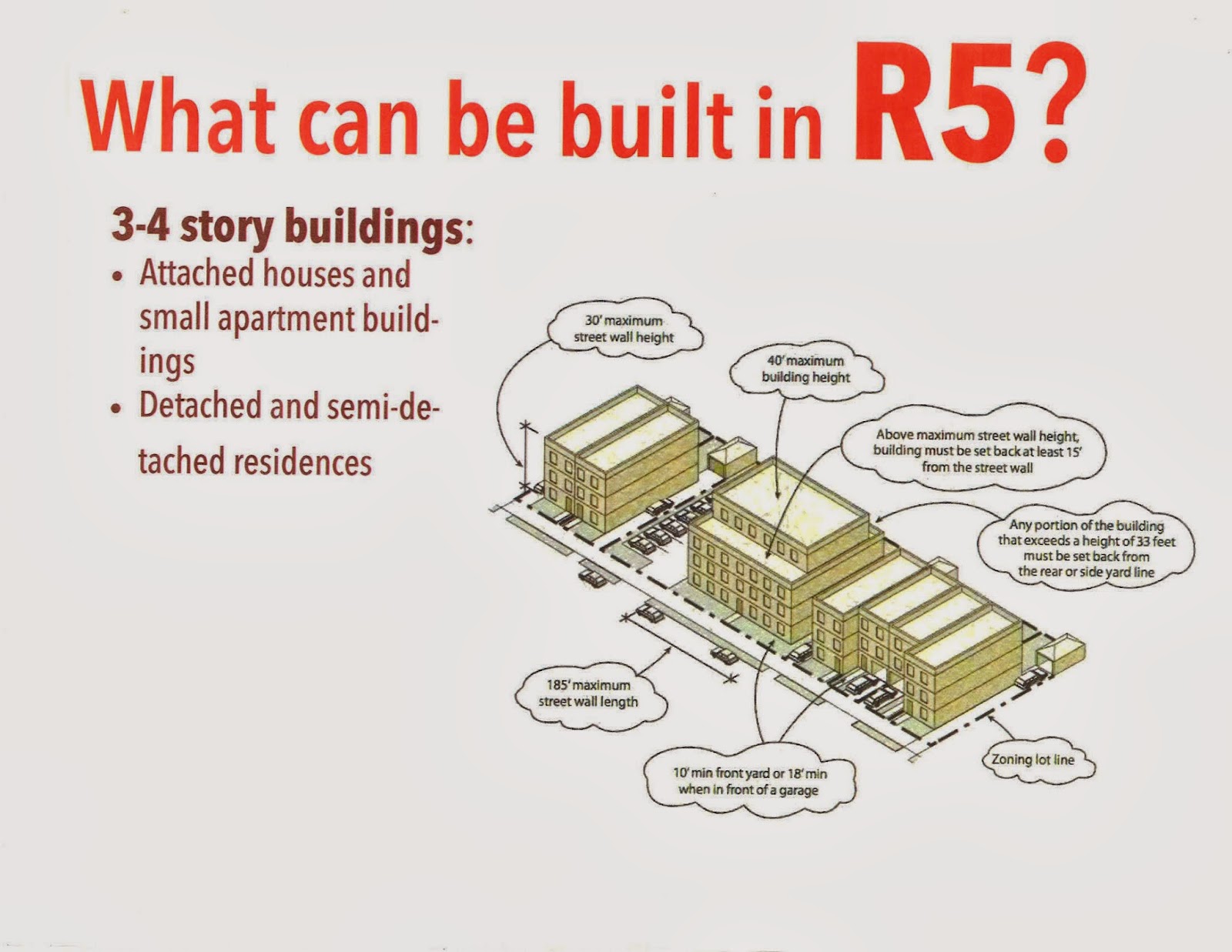 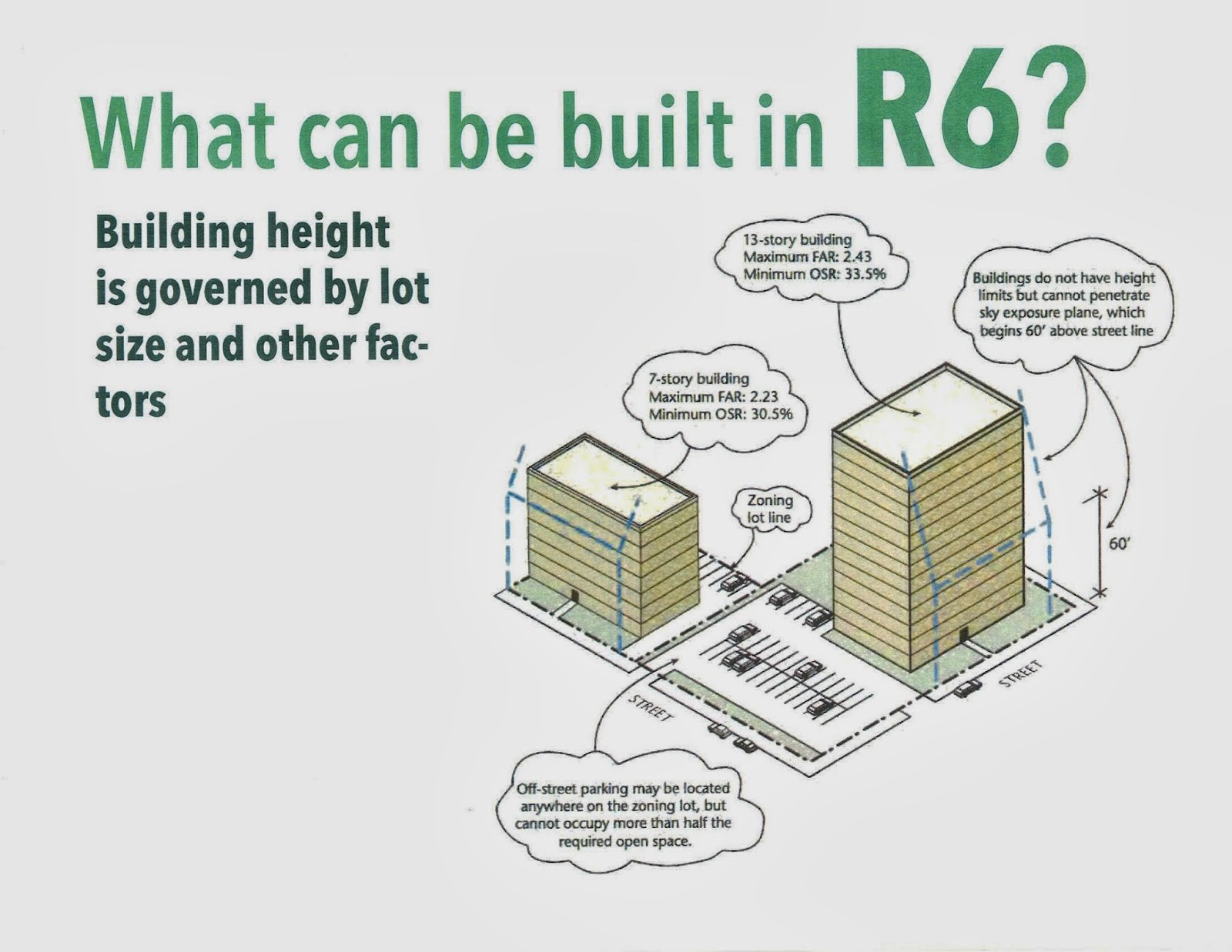 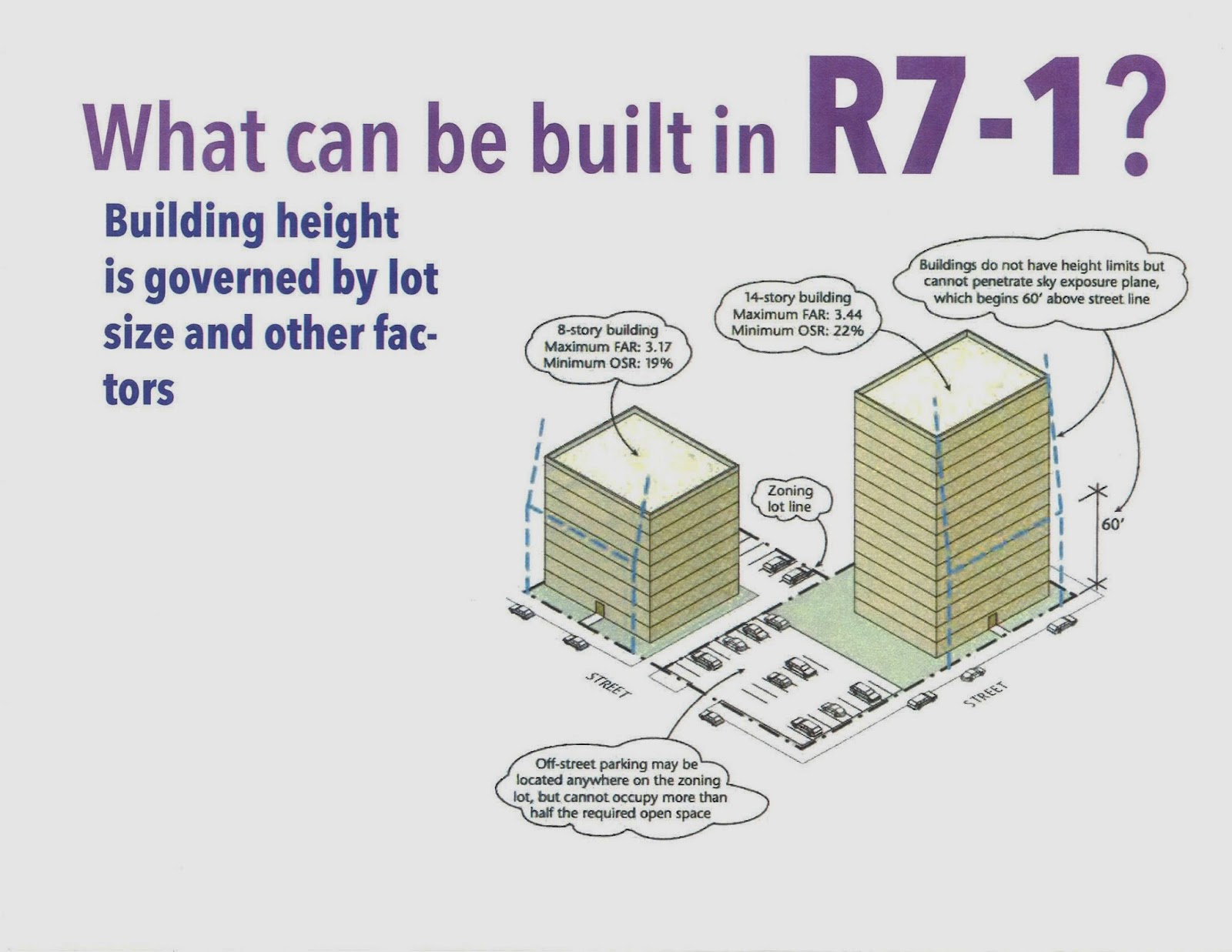 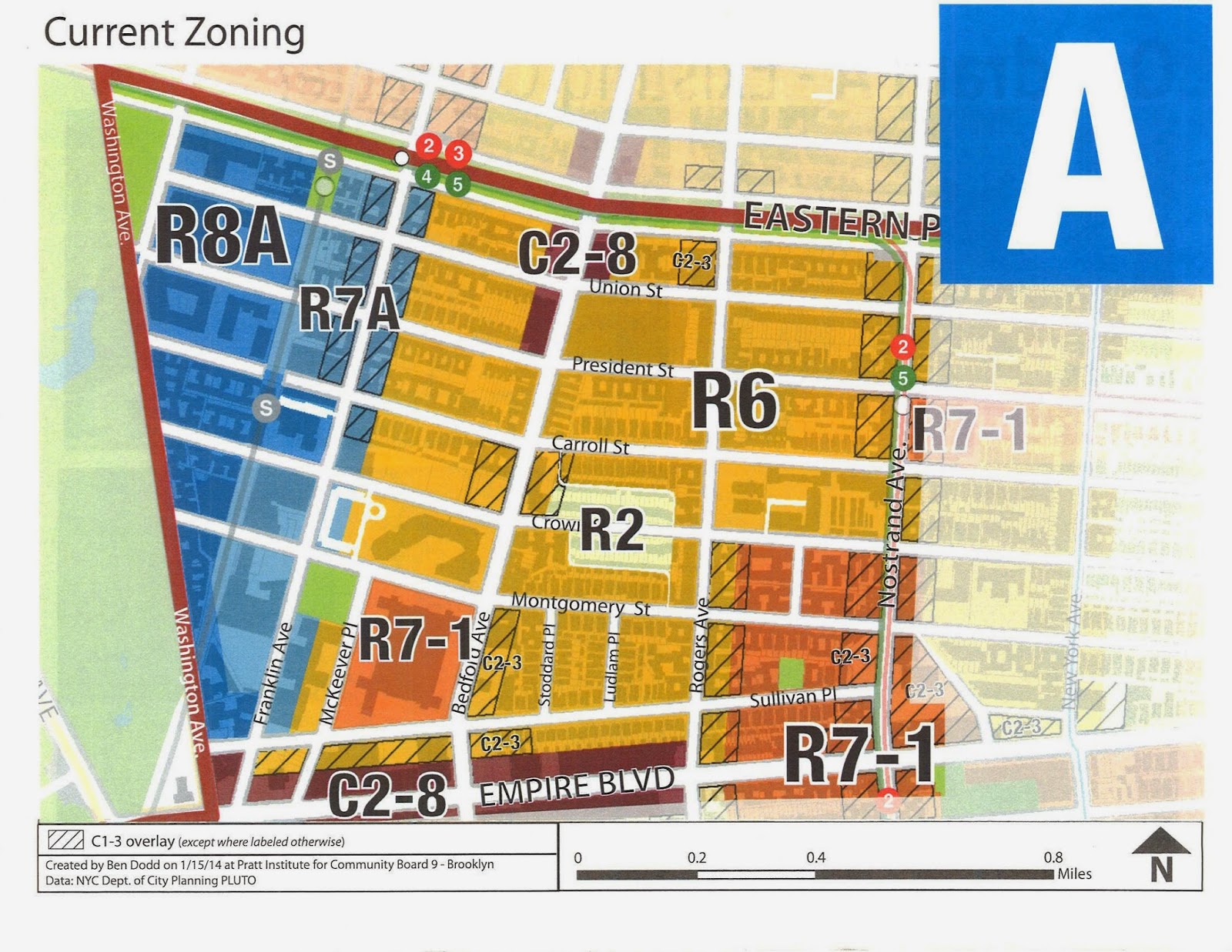 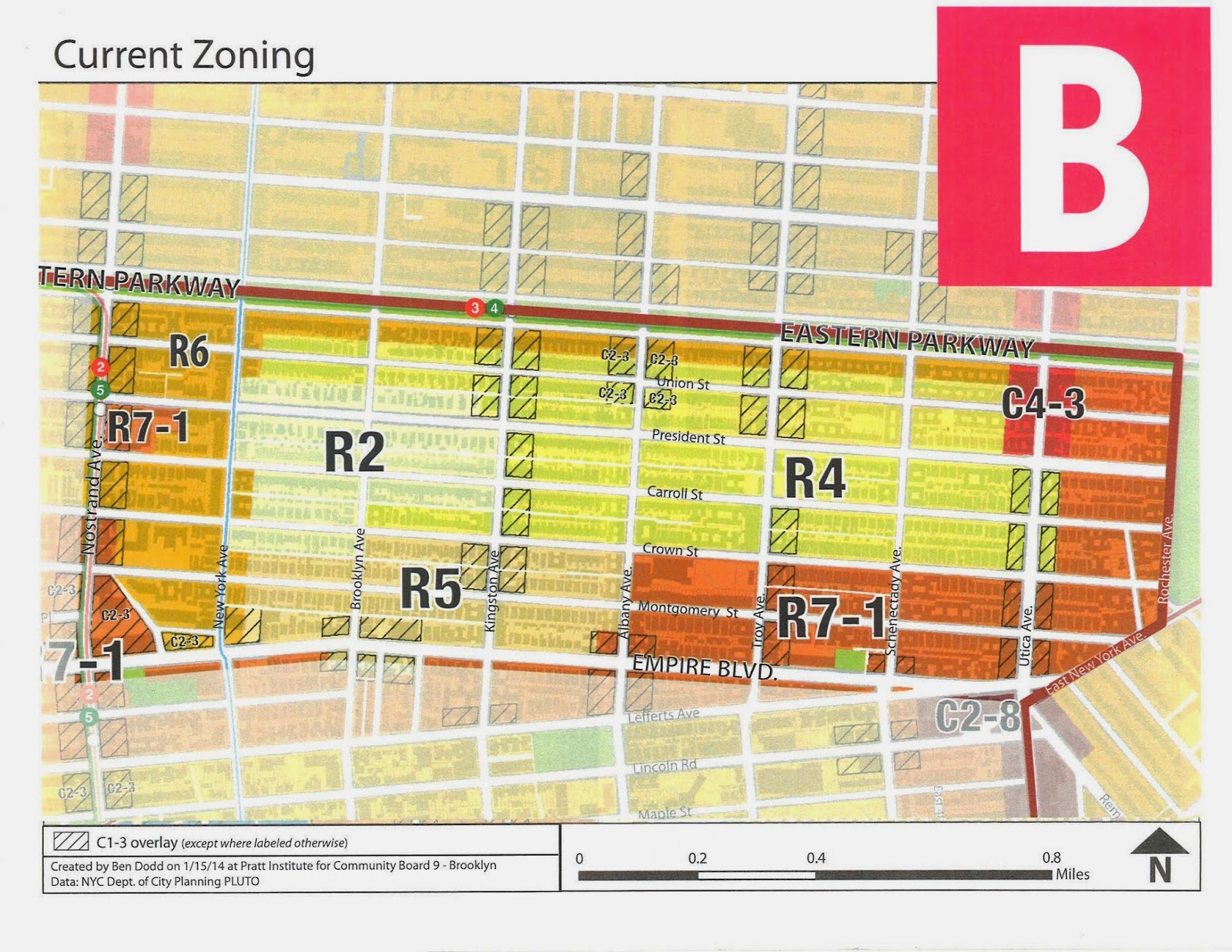 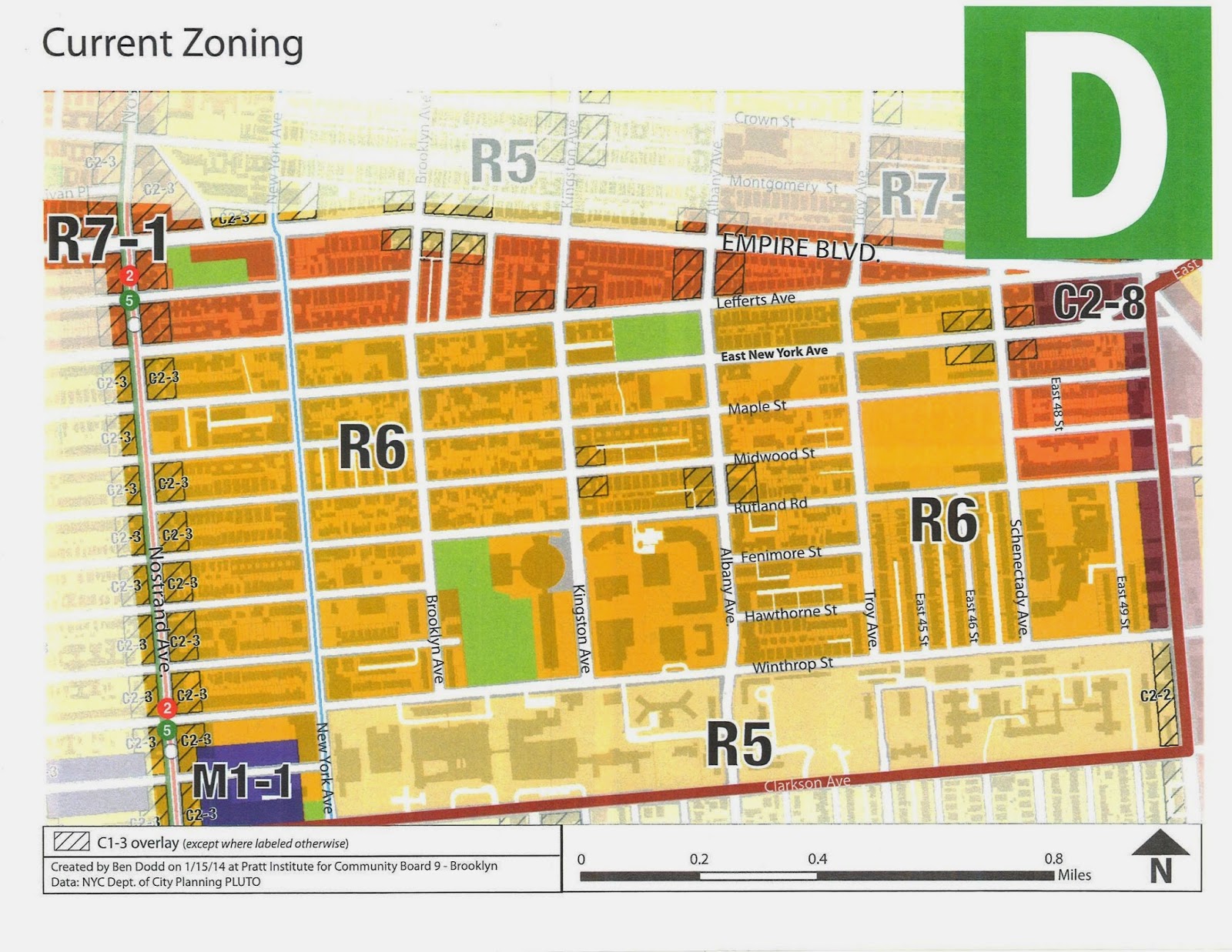 Study them well!
Posted by Clarkson FlatBed at 11:09 PM

It seems that with the exception of Tivoli Towers, that swath that is zoned R8A is underutilized.

There go the "impressive views of Prospect Park"!

Glad you noticed! The Spice Factory may soon be taken over by Medgar Evers.

Apparently, the Brooklyn Botanic Garden managed to get Tivoli to develop farther away than they had originally planned.

If that's true, it makes you wonder who with power pulled the trigger on that.

Nooo..I love the spice factory! I knew it was just a matter of time, unfortunately - better Medgar Evers than "luxury" condos, however...

I didn't hear about the spice factory going by the wayside. I did hear that the Sea Crest linen site across the street has shut down and will be sold.

There is also another property on the deadend part of Carroll Street (next to the shuttle tracks)that is also on the market. It's zoned R8A.

Also, please note that Lefferts Manor, which consists primarily of single-family ATTACHED houses, i zoned R2, so that accompanying graphic isn't quite right.

Barbara, the graphic for R-2 is correct. The homes in the Manor were all built before the 1961 Zoning Code so they are what we now call "non-conforming". If you wanted to build on a vacant lot in the Manor you would not be able to build something like the existing houses on Maple or Midwood because you would have to follow the R2 zoning rules. (In addition to getting LPC approval.) The same would go for any addition or expansion to an existing home.

In addition the FAR in the manor is an itsy bitsy 0.5 - so you would only be able to build 1,000 square feet on a normal 20x100 lot! Every house is over FAR so there really can't be any additions in the manor.

And that's fine with me! Thanks for the clarification.

Regarding the building height in R7-1 zoning, can someone explain what is meant by "sky exposure plane"?

Diak: Sky plane is a formula intended to provide a certain amount of sunlight reach the ground. In some zoning, you barely have to pay attention, like midtown Manhattan. You can also buy air rights from other buildings to go higher.

In lower numbered zones, you must create an angle to the sky. That's why so many taller buildings are set back from the street, and why many have a terraced architecture. They're creating access to the sun and sky, since the sky plane is from the street.

This is another reason that Hudson was able to go so high. They bought a big enough plot of land that they could set back far enough from the sidewalk.