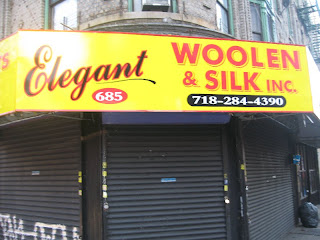 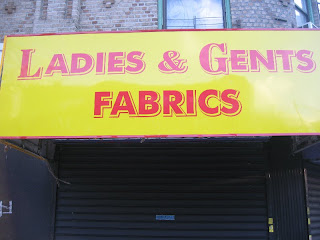 Surely you've seen these fantastic wrap-around signs of the newly opened Elegant fabric shoppe on Flatbush at Winthrop. Perhaps you've peaked inside and imagined what sort of magic resides therein. Fabric, my friends. Reams and reams and yards and yards of beautiful fabric from all over the world. And its tagline? "Fine Worsted Suiting Fabric," bringing both a new word to the Q's vocabulary and a great title for the post.

The old-world shop-keep is Sammy, and he just moved his store here from 174 Orchard, Orchard Street once being the king of kommerce on the lower east side. (perhaps you've been lately? i think it's more about bistros and bars now, though last time I peaked there was still some low hanging luggage to be snagged). Sammy was born in Egypt, his family forced to flee to Israel during the early days of the Nasser regime. He emigrated to the United States in 1975 and after a few years of apprenticeship on Orchard, opened his own shop.

Does it seem strange that he's landed in our neck of the 'Bush? Not at all. Many of his best clients are from the islands, including many tailors who work right here in the neighborhood. Sure he's had to keep his stock fresh to go with his clientele's predilections, but since Orchard Street is no longer what it once was, he's happy to call Flatbush home. Sammy notes "we have fabric from all over the world - England, India, Italy, Africa." The one notable exception? There is no fabric worthy of his store that's made in the U.S.A. Interesting.

When the Q first noticed his sign a couple months back, something about it made me think olde time. And more specifically, it made me think Barnum & Bailey Circus. So I looked up old images from them, and it still seems reminiscent somehow. As I look at the font I'm not sure they're even a little bit related. Can someone with a background in graphic design tell me if I'm completely crazy to see a connection? 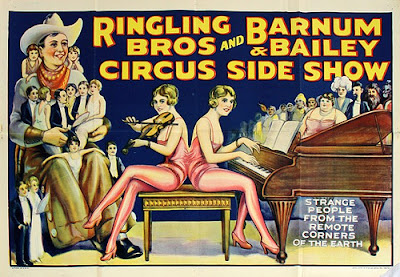 Maybe they just both seem "old" and hand painted. And how both them Siamese Sisters playing violin and piano? You just don't see that as much these days...
Posted by Clarkson FlatBed at 3:51 PM

Interesting. Thanks for featuring this place. I'll shop there. They just featured the plight of the garment industry on Project Runway All Stars -- companies are being pushed out of Manhattan due to rising rents. It's sad if the Manhattan garment district is no more. But maybe like this man they will venture to Brooklyn instead of give up NYC entirely. Hope so.

As long as it's not another salon... Just sayin'

This is cool. It would be neat if other fabric stores made their way to the area, too. Technically, that's retail diversity.

I stopped in the other day - really have an impressive selection of fine fabrics (much nicer than that found in the other stores around here). However, i was looking for zippers, which they don't have yet, but they directed me to Trim Fabrics, farther down on Flatbush (by Caton). The most amazing, tiny, little store ever - chockablock with every kind of trim and fitting you could imagine - when was the last time you saw so much rick rack? The shopkeeper told me that many tailors frequent the shop and leave their cards. The idea of having clothes custom and locally made is appealing - choose you own fabrics, etc., and all from Flatbush Ave!

Thanks Babs!! Ooh I love Ric Rac!!! Good to know. It's hard to find notions. I once stopped in Mood Fabrics, the famous place, in Manhattan looking for interfacing and the girl behind the counter was sympathetic saying they had no notions and didn't know where I could find any and she said, "NYC just needs a Joanns Fabrics."